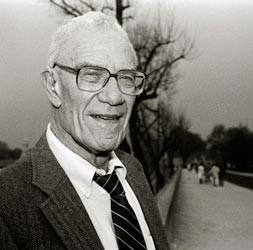 The ultimate aim of economics is to find ways to promote economic growth, increasing production and welfare. Robert Merton Solow is particularly known for his work in this area. In 1956, Solow created a model of economic growth, often known as the neo-classical growth model, that allows the determinants of economic growth to be separated out into increases in inputs (labour and capital) and technical progress. It takes into account improvements in technology, investment and education, and personal savings. Using his model, Solow calculated that about fourfifths of the growth in US output per worker was attributable to technical progress. Since Solow’s initial work in the 1950s, more sophisticated models have led to varying conclusions about the causes of economic growth. In other areas, he has published important contributions in the area of natural resource economics and macroeconomic questions involving unemployment and economic policy, and laid the foundations for what was later to develop into ‘growth accounting’.

Solow was born in Brooklyn, New York, in 1924, the oldest of three children. He excelled academically in the local schools and in 1940, gained a scholarship to Harvard College, where he studied sociology, anthropology and elementary economics. In 1942, he left the university to join the Army, serving in North Africa and Italy until he was discharged in August 1945, and pays credit to the formative influence of his colleagues and commanding officer “who never wavered from the path of humor and decency”. He returned to Harvard, and became interested in statistics and probability models. From 1949–50, he spent a fellowship year at Columbia University, but also accepted an assistant professorship in the Economics Department at MIT.

Solow’s interest gradually changed to macroeconomics, and he worked with Paul Samuelson on several theories: von Neumann growth theory (1953), capital theory (1956), linear programming (1958) and the Phillips Curve (1960). Solow also held several government positions, including senior economist for the Council of Economic Advisers (1961–62) and member of the President’s Commission on Income Maintenance (1968–70). He retired from MIT in 1995, but remains as professor emeritus and has continued to work on a long collaboration with Frank Hahn on macro-theory. He also remains on the board of the Manpower Demonstration Research Corporation, which he helped found in the 1970s, which aims at improving the employment and earning power of disadvantaged groups. In 1961 he won the American Economic Association’s John Bates Clark Award, and in 1979 he was president of the AEA. In 1999, he received the US National Medal of Science. He married Barbara Lewis in 1945, and they have two sons and one daughter.

Robert Solow with his "Sketch of Science"