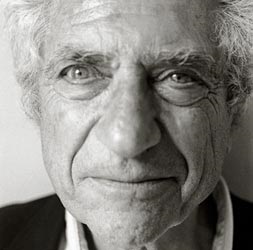 Jack Steinberger was born in 1921 in the spa town of Bad Kissingen in Bavaria. With the rise of the Nazi party, the American Jewish Charities organisation funded 300 child refugees, including Jack and his elder brother, in 1934. Jack was taken in by a Chicago businessman, who put him into the respected New Trier Township High School (to whom Jack donated his Nobel medal) and helped bring Jack‘s parents and younger brother over in 1938. Reunited, the Steinbergers were helped to buy a small delicatessen, and Jack went on to study chemical engineering at the Armour (now Illinois) Institute of Technology until his tuition scholarship expired. He persevered with evening chemistry classes at the University of Chicago and with the aid of a scholarship returned to day classes, earning his degree in 1942. During the war, he worked at MIT making radar bomb sights, and took the opportunity to study basic physics. After the war, he continued his studies at the University of Chicago, mainly under Enrico Fermi, with fellow students including several future Nobel laureates.

Steinberger gained his PhD in 1948, having discovered that cosmic-ray muons decay into three, not two particles. This laid the experimental foundation for the concept of a universal weak interaction, one of the four fundamental forces in nature. He then worked at Princeton under Robert Oppenheimer, and Berkeley, California, before moving on to Columbia University as physics professor in 1950. He stayed there until 1968, then moved to CERN in Geneva, Switzerland.

At Columbia, Steinberger worked at the cyclotron, exploring the properties of pions, and then at the Brookhaven Cosmotron, studying the properties of „strange“ particles using bubble chambers as detectors. In 1961 Schwartz suggested using the new, higher energy proton accelerator named AGS to create a stream of neutrinos – subatomic particles that have no electric charge and very little mass – as a research tool in the study of weak nuclear forces. In the process, they also discovered a new type of neutrino called a muon neutrino and, 27 years later, Lederman, Schwartz and Steinberger received the Nobel Prize in recognition of this experiment.

In 1986, he became part-time professor at the Scuola Normale Superiore in Pisa but continued to work at CERN until 1995, since when he has maintained his links with the organisation. Of his $140,000 share of the Nobel Prize, Steinberger kept half and split the rest between Chicago University and the charities that initially helped him flee Nazi Germany. He was married to biologist Cynthia Alff, with whom he had two children. He also had two sons from an earlier marriage to Joan Beauregard. 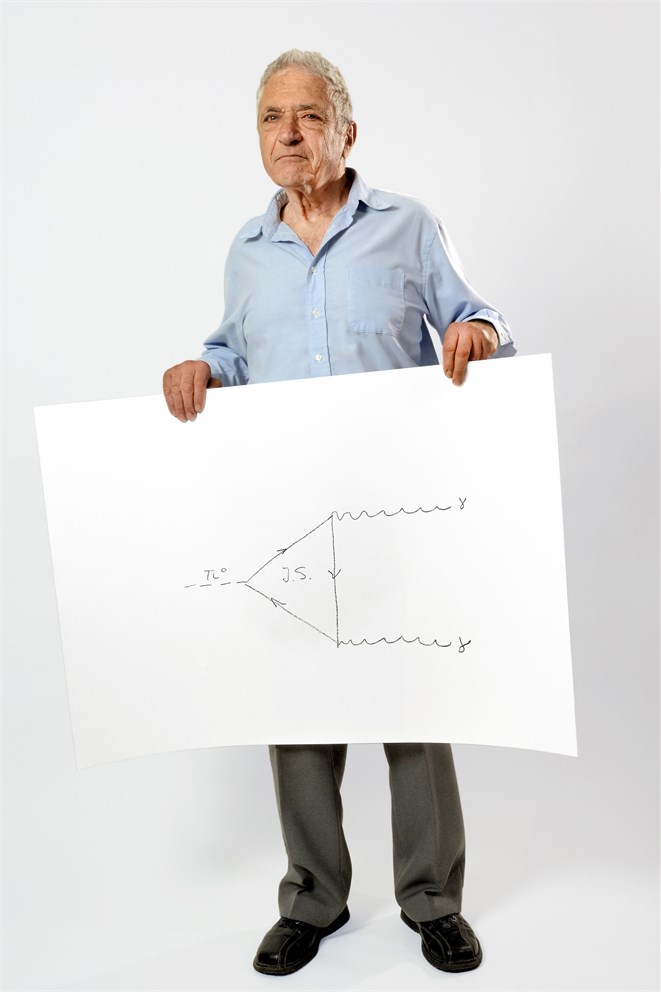 At first, he didnʼt feel like doing a drawing. Then, he changes his mind. He tells me how he likes to bike, which is something his doctor had advised him to do. He even asks me how many meters of altitude difference I can do in a day on my bike. His drawing has to be black – nothing but black. He tells me how, as a young man, he saw Einstein at Princeton University but could not find the courage to talk to him. They could have spoken in German, or even English. Steinberger’s drawing does not actually show the discovery, which earned him the Nobel Prize. Rather, he draws a discovery for which he should have got the Nobel Prize. Clever!

Paths of Decay
by Adam Smith

Of the fifty Laureates featured in the original Sketches of Science exhibition, forty-six dutifully followed Volker Steger’s instruction to “illustrate your great discovery” by picking-up the crayons and sketching their Nobel Prize-awarded achievements in some way. Of the four who didn’t, one, Carlo Rubbia, used a cartoon drawn by someone else. Another, Richard Taylor, drew nothing at all. And two decided to illustrate other discoveries; Craig Mello depicted what he is working on now, and Jack Steinberger drew the picture seen here, which illustrates a piece of theoretical work he did thirteen years before the experiment that earned him the Nobel Prize.

That later experiment, performed in 1962 together with Leon Lederman and Melvin Schwartz, with whom Steinberger shared the Nobel Prize, led to the discovery of the second neutrino. Neutrinos, which are mostly generated in the sun (at least as far as we on this planet are concerned) are a class of elementary particles of exceptionally low mass which normally pass right through the earth. “I don’t know how to draw either the experiment or the second neutrino,” says Steinberger. So he chose instead to depict his 1949 work on the decay of the π0 meson, which he descibes as “certainly a more creative achievement.”

Mesons had first been predicted to exist in the 1930s, as the suggested carriers of the force that holds protons and neutrons in the atomic nucleus. The first true mesons, the charged π mesons (or charged pions as they are now known), were discovered in 1947. Alongside the two charged pions, π+ and π-, it was thought that there ought to be a third neutral pion, π0, but this was harder to detect. Pions are incredibly short-lived particles, which exist for just a few billionths of a second, but can be recognized from their signature decay patterns. In 1949, before it was actually observed, Steinberger proposed that the neutral pion, π0, would decay into two photons, the two wavy gamma rays indicated on the right of his diagram and labelled with the letter “γ”. The next year, observation of Steinberger’s predicted decay pattern led to the definitive detection of π0.

“When I look back at this work of mine when I was a young man, I’m really taken aback. All of my brains are gone,” says Steinberger, “But at that time I still had some.”