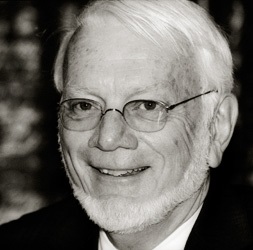 Each year more than two million patients are infected by antibiotic-resistant bacteria in the US alone and over 90,000 die. To sidestep the problem of resistance, scientists are focusing on ribosomes - large, complex particles within each cell that translate DNA into proteins, each one tailor-made to perform any of the tens of thousands of jobs the body requires.

Thomas Arthur Steitz was born in Milwaukee, Wisconsin, in August 1940. The oldest of five children he admits he was an average scholar in high school until he faced competition from his younger brother. He eventually graduated 8th in a class of over 300. A keen chorister and saxophone player, Steitz almost opted for a music career, but instead gained a scholarship to Lawrence College, where he majored in chemistry and got his first taste of biophysics in a two-week conference at MIT.

In 1962 he progressed to Harvard, intending to study nucleic acids, but after witnessing a 3-D slide show of the first atomic resolution protein crystal structure (myoglobin), Steitz joined a team under William Lipscomb (Nobel, 1976) studying protein crystallography. The process was laborious, collecting up to 5,000 X-ray reflections in a week on a 32k IBM computer to map the protein structure – today’s x-ray facilities can measure 5 million reflections in an hour, which can be rapidly processed.

Steitz faced more computer restrictions in Cambridge, England, where he did his postdoctoral research from 1967-70. The team had to borrow the astronomy department’s machine for calculations, but he gained more insight in discussions with the likes of Francis Crick, Sydney Brenner and Fred Sanger.

Returning to the US he worked briefly at Berkeley before moving to Yale University, Connecticut, where he was joined by his wife and fellow professor Joan – they have a son, Jon, born in 1980. Steitz helped create the Yale Center for Structural Biology and is now a Sterling Professor of Molecular Biophysics and Biochemistry.

With increased funding – and better computers – Steitz tackled ever greater projects, starting with his best known structural models of yeast hexokinase. Later, he mapped the structure of an aminoacyl-tRNA synthetase complexed with transfer RNA. During the 1980s his team determined the first structure of a DNA polymerase, mapped the catabolite gene activator protein (CAP) and in 1991 produced a model of CAP bound to DNA.

The structures of T7 RNA polymerase captured in various states of transcription initiation and elongation as well as nucleotide incorporation illuminate transcription. The final link in ‘Crick’s Central Dogma’ (the process of DNA makes DNA makes RNA makes protein) was the structure of the ribosome. Steitz’s team finally built a 3D model in 2000 and determined the binding patterns of many antibiotics. It was this work that earned the Nobel Prize. 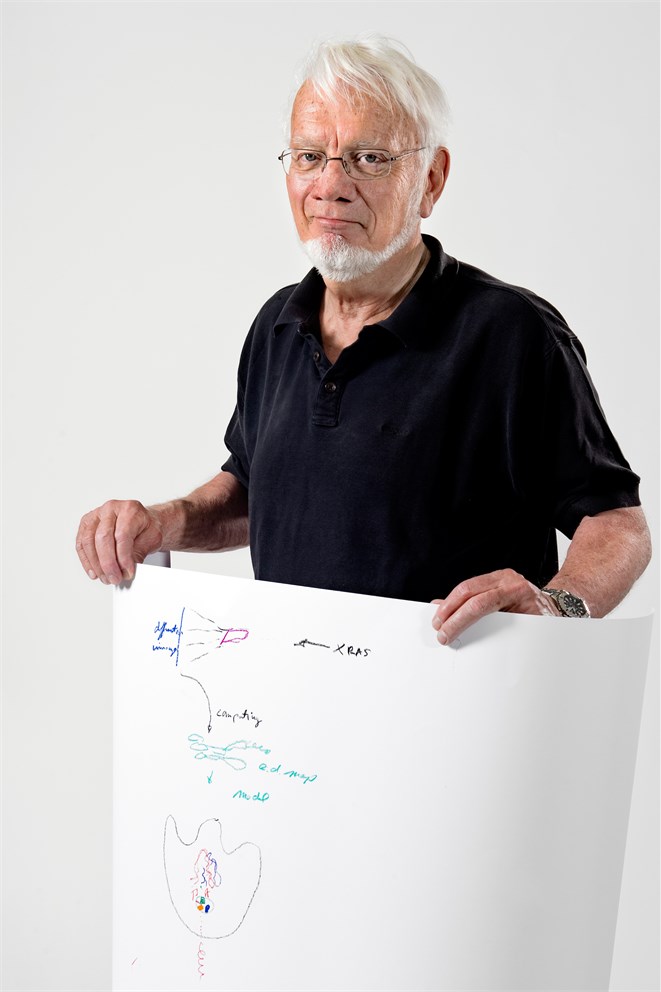 I wish it was bigger and in 3D. I mean the ribosome on Steitzʼ sketch.
Steitz is one of the peopl,e who have unravelled the structure and
function of these tiny protein-plants of the cell.
Thus, all Nobel Laureates were once made by ribosomes –
including Thomas A. Steitz!

The Protein Factory
by Adam Smith

Francis Crick’s famous 'central dogma of biology', that DNA makes RNA makes protein, requires some stupendously complicated machinery to make it happen. In the centre of Tom Steitz’s sketch is a part of the last piece of that machinery, the crown-shaped large subunit of the ribosome, with a newly-formed protein chain emerging as a squiggly red line at the bottom. It was for his part in elucidating the structure of the ribosome that he shared the Nobel Prize with his co-Laureates Ada Yonath and Venkatraman Ramakrishnan.

The sketch shows the path to that structure. At the top, a beam of X-rays (labelled “XRAS”) streams towards a crystallised form of the large subunit of the ribosome, the cell’s protein factory. That crystal, shown by the purple box, was far from easy to obtain, and it was part of Ada Yonath’s contribution to demonstrate that ribosomes could be crystallised at all. The crystal diffracts the X-rays to give a pattern of diffraction spots, in blue, which gets converted into numbers to produce an electron density map, shown in green. Finally, this electron density map gets interpreted in terms of atomic positions, generating an atomic model of the large subunit of the ribosome.

The overall shape of the subunit had been discovered, initially by electron microscopy, many years beforehand, but following Steitz’s work the location of every one of almost a hundred thousand atoms is now known. Such detailed knowledge helps explain how the ribosome carries out its function of catalysing the formation of the peptide bonds that link the amino acids in the growing protein chains. It also allowed Steitz and others to reveal and study the sites of interaction of antibiotics, about 50% of which work by targeting the ribosome. In the diagram, several different classes of antibiotic are shown (as orange, blue and green dots) binding to the site of peptide-bond formation, getting in the way and stopping the protein chain from exiting the ribosome.

“I used to draw all the models,” says Steitz, “the schematic models of structures that we solved, by hand, myself, for publications and journals. Now it’s all done by computers. I have to say computer programmes are better than I was.”