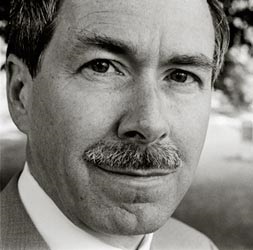 Science is in Gerardus ’t Hooft’s blood. In 1953, his grand-uncle Frits Zernike, received the Nobel Prize in Physics, his grandfather PN van Kampen was a biology professor, and his uncle, Nicolaas van Kampen was professor of theoretical physics at Utrecht.

Gerardus, born in Den Helder in 1946, was late in learning to read, write, or even speak, but he was advanced in engineering. He experimented with Meccano sets and radio kits. When his father, a naval engineer, bought him books about ships and cars, he rejected them, saying: “Those things have already been invented. I want to discover new things.” At the Dalton Lyceum in The Hague he excelled at chemistry and physics, and was encouraged in biology due to the staff’s regard for his grandfather. He progressed to the State University of Utrecht where his uncle was teaching but, keen to get to grips with subatomic particles, he studied instead under Martinus Veltman. Veltman had been working on a paper by CN Yang and RL Mills generalising the concept of photons, which was considered brilliant but useless for, as he explained to his student: “It describes particles that do not exist”.

Scientists had formulated several different theories in attempts to describe the interplay between electromagnetic and weak nuclear forces. These theories lacked a proper mathematical foundation. Veltman suspected that the Yang-Mills theory had to be the key to the problem, and had designed a computer program to prove it. In 1970, ’t Hooft attended a summer course in Corsica under Maurice Lévy. There, he learned about spontaneous symmetry breaking and renormalization, but the Yang Mills theory was never mentioned. ’t Hooft found how to work with the Feynman rules for the Yang-Mills particles and in 1971 published his findings. Together with Veltman, he found how to apply them to the W and Z particles predicted by modifying the theory. The methods developed by ’t Hooft and Veltman would later be found to apply to all known particles and forces, unified in what is now called `the Standard Model’. In 1999 the two men shared the Nobel Prize in Physics “for elucidating the quantum structure of electroweak interactions in physics”.
’t Hooft passed his PhD in 1972. The same year he married Albertha Schik, a medical student at Utrecht. They have two daughters.

The duo then joined CERN in Geneva, where ’t Hooft applied the Yang-Mills theory to the quark confinement problem. This led him to other important discoveries. He received a number of awards and honours, among them the Lorentz Medal. An asteroid (9491 Thooft) is named in his honour; and he has written a constitution for its future inhabitants.

His scientific interest has now shifted towards questions concerning the gravitational force and the foundations of quantum mechanics. These questions culminate when the tiniest possible black holes are considered. Since experimental evidence is lacking, there is no consensus concerning the rules to follow, but it seems reasonable to suspect that the most accurate approaches will lead to revolutionary reformulations of the most basic laws of nature.

’t Hooft’s interests also extend to questions concerning the origin of life, the abundance of life in the universe, artificial intelligence and the human conquest of outer space.


This adapted text and the picture of the Nobel Laureate were taken from the book: "NOBELS. Nobel Laureates photographed by Peter Badge" (WILEY-VCH, 2008). 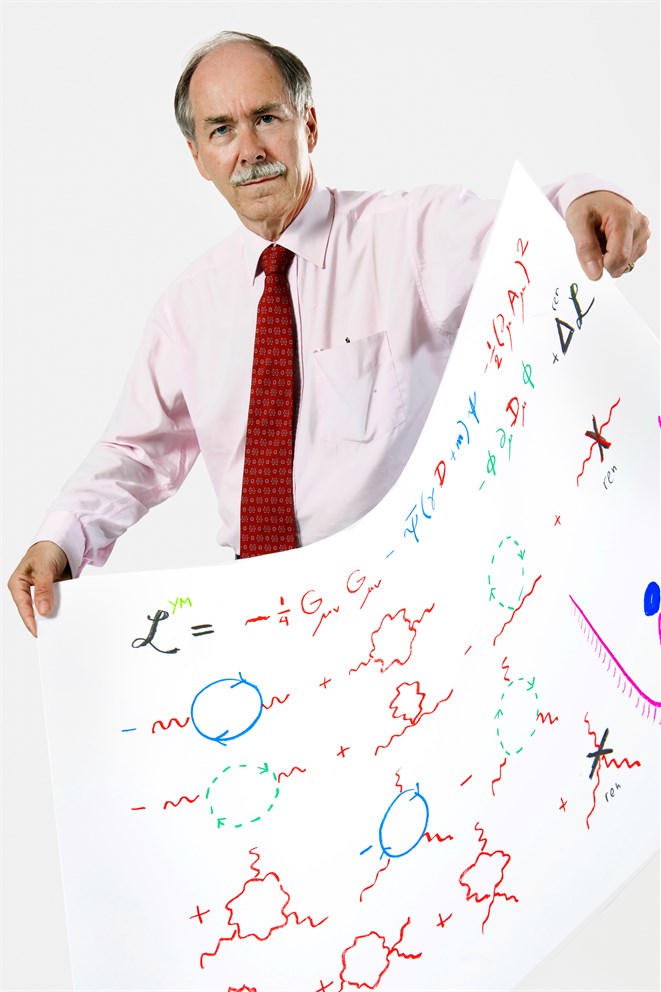 When asked for his “Nobel drawing”, ‘t Hooft pushes aside the big paper I
off er and asks for a standard A4 sheet. I get slightly worried, because such
a small drawing would look bad in the photo. As it turns out, he only
wants to make a draft on the small piece of paper, which is then to be
transferred to the full 70 x 100 cm. This is exactly how it happens:
A perfectionist at work!

Expressing the Elementary
by Adam Smith

“The formula on top and the diagrams below are just different sides of the same coin,” explains Gerardus ‘t Hooft, looking at his drawing. “It’s sometimes difficult even to explain to your nearest, closest colleague exactly what you’re doing. And so we have learned to try to simplify our notation and the way we talk about things as much as possible.”

At the top of the page ‘t Hooft has written a formula, which he quickly points out “will not be understandable to most people.” It is a depiction, in the simplest form, of expressions needed to describe a field theory in particle physics. Field theories describe objects in the world of particles, the equations used to express them being similar to those used to describe more familiar electric or magnetic fields. The coloured pictures that fill most of the page are ‘Feynman diagrams’: pictorial representations of the mathematical expressions that govern the behavior of subatomic particles. They were invented by Richard Feynman in the mid-20th century as a way of helping particle physicists express their ideas to themselves, to their colleagues, and to the general public.

The diagrams in a very rough sense describe how particles move. For example, look at the first picture, top left, with a minus sign in front of it. A wavy line, which normally indicates a photon, comes along from the left. Like all elementary particles, the photon has the quantum mechanical property of spin, which is a type of angular momentum, and the value of its spin is 1 (throughout ‘t Hooft’s sketch, the colour red indicates fields with spin 1). The photon then splits into two particles, each of spin ½, shown in blue. One particle goes up, the other down, where the arrow in the ‘wrong’ direction indicates that this is an antiparticle. Then, to the right, the two particles combine again and the photon continues on its ways. One beauty of such Feynman diagrams is that they can in fact be viewed in different ways, and work equally well when read right to left.

‘t Hooft’s work with his PhD supervisor Martinus Veltman improved the predictive applicability of the Standard Model of particle physics and resulted in them being awarded the 1999 Nobel Prize in Physics. An important ingredient in their model was the elusive Higgs’ particle, which makes a celebrity appearance as the blue dot, bottom right.