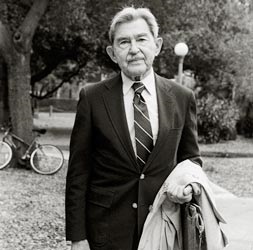 Henry Taube was born 1915 in Neudorf, Canada, and attended high school at Luther College in Regina before going on to the University of Saskatchewan where he earned a BSc in 1935 and MSc in 1937. He then studied chemistry at the University of California, Berkeley, saying: “Just the general atmosphere of the college was conducive of this; chemistry was in the air.” He gained his PhD in 1940 and stayed on for a year as an instructor before joining the Cornell University faculty in 1941. The following year he became a US citizen, and in 1946 joined the University of Chicago where he remained until 1961. He was a member of the Stanford faculty as professor of chemistry from 1962 until 1986, when he became professor emeritus. He served twice as chair of Stanford’s Department of Chemistry – from 1972–74 and 1978–79 – and lived on campus doing experimental work until shortly before his death in 2005.

Taube maintained a lifelong interest in oxidation-reduction or ‘redox’ reactions, in which electrons are transferred between molecules during a chemical reaction. Redox reactions occur in everything from plant photosynthesis and animal respiration to industrial processes such as combustion. He developed the details of how these reactions occur, specifically concerning metal complexes. He was among the first chemists to use isotopes to determine reaction mechanisms, and to probe mechanisms of inorganic chemistry. In the process he detailed a whole new area regarding transition metals, such as ruthenium and osmium. In the Nobel citation for his work in redox reactions, Taube was described as: “one of the most creative contemporary workers in inorganic chemistry”.

In addition to his university work, Taube was a consultant at the Los Alamos Laboratory and at Catalytica Associates Inc. He belonged to more than a dozen professional societies and, in addition to the Nobel Prize in Chemistry, he received dozens of other honors, including two Guggenheim fellowships in 1949 and 1955, the National Medal of Science in 1977, the Robert A. Welch Award in Chemistry in 1983 and an honorary fellowship in the Royal Society of Canada in 1997. Away from such accolades, however, he was known by colleagues and students for his friendly and informal manner. As one said: “The real talent of this man was making chemistry not only challenging and stimulating, but a lot of fun as well.” Taube described science as an intellectual exercise that enriches our culture. “Each new insight … provides a thrill,” he said. Taube is survived by Mary, his wife, two sons, a daughter and several grandchildren.

The Department of Chemistry is establishing the Taube Memorial Fund to endow a Taube lecture series.