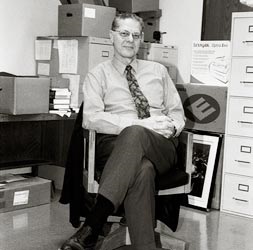 Born in Philadelphia, Pennsylvania, in 1941, Joseph Hooton Taylor’s Quaker family moved back to the family farm in New Jersey when he was seven. It was there that a fascination with ham radio set him on the road to the Nobel Prize in Physics. With his elder brother Harold, Joseph collected scrap radio equipment and built several large, rotating, radio antennas. “We learned by experience that when you need high voltage, the power company’s 6,000- to-120-volt transformers work admirably in reverse; and that most amplifiers will oscillate, especially if you don’t want them to,” he laughs.

Both boys were educated at Quaker institutions, in particular Moorestown Friends School and Haverford College, both excelled at sports, and went on into careers in astrophysics (Harold was a Professor of Physics at The Richard Stockton College of New Jersey for over 30 years. The college renamed the campus observatory in his honour). Joseph gained his physics degree at Haverford in 1963, using his knowledge of radio-frequency electronics to build a working radio telescope as a senior thesis project. He then went on to complete a PhD at Harvard, combining Astronomy, Physics, and Applied Mathematics.

Under Alan Maxwell he says, his thesis research in radio astronomy was “thoroughly enjoyable”. After a brief research position at Harvard, Taylor went to the University of Massachusetts, eventually becoming Professor of Astronomy and Associate Director of the Five College Radio Astronomy Observatory. He completed his PhD in 1968, around the same time the first radio pulsars were being discovered by a team at Cambridge, England. Taylor went to the National Radio Astronomy Observatory’s telescopes in Green Bank, West Virginia, and took part in the discovery of the first pulsars made outside Cambridge. In 1974, Taylor and his student Russell Hulse discovered the first pulsar in a binary system, during a survey at the Arecibo Observatory in Puerto Rico. The orbit of this binary system is slowly shrinking as it loses energy because of emission of gravitational radiation, and Taylor has used this to test general relativity, incidentally proving Albert Einstein’s theory to be totally accurate.

In 1980, he moved to Princeton, serving as the Distinguished University Professor in Physics and later as Dean of the Faculty. He retired in 2006. In addition to the Nobel Prize, Taylor has received many other awards and served on many boards, co-chairing the Decadal Panel that established the United States’ priorities in astronomy and astrophysics for 2000–2010. Taylor is married to Marietta Bisson Taylor and is still a fan of amateur radio. He wrote WSJT-X, a program which uses soundcard generated signals to boost communication links.