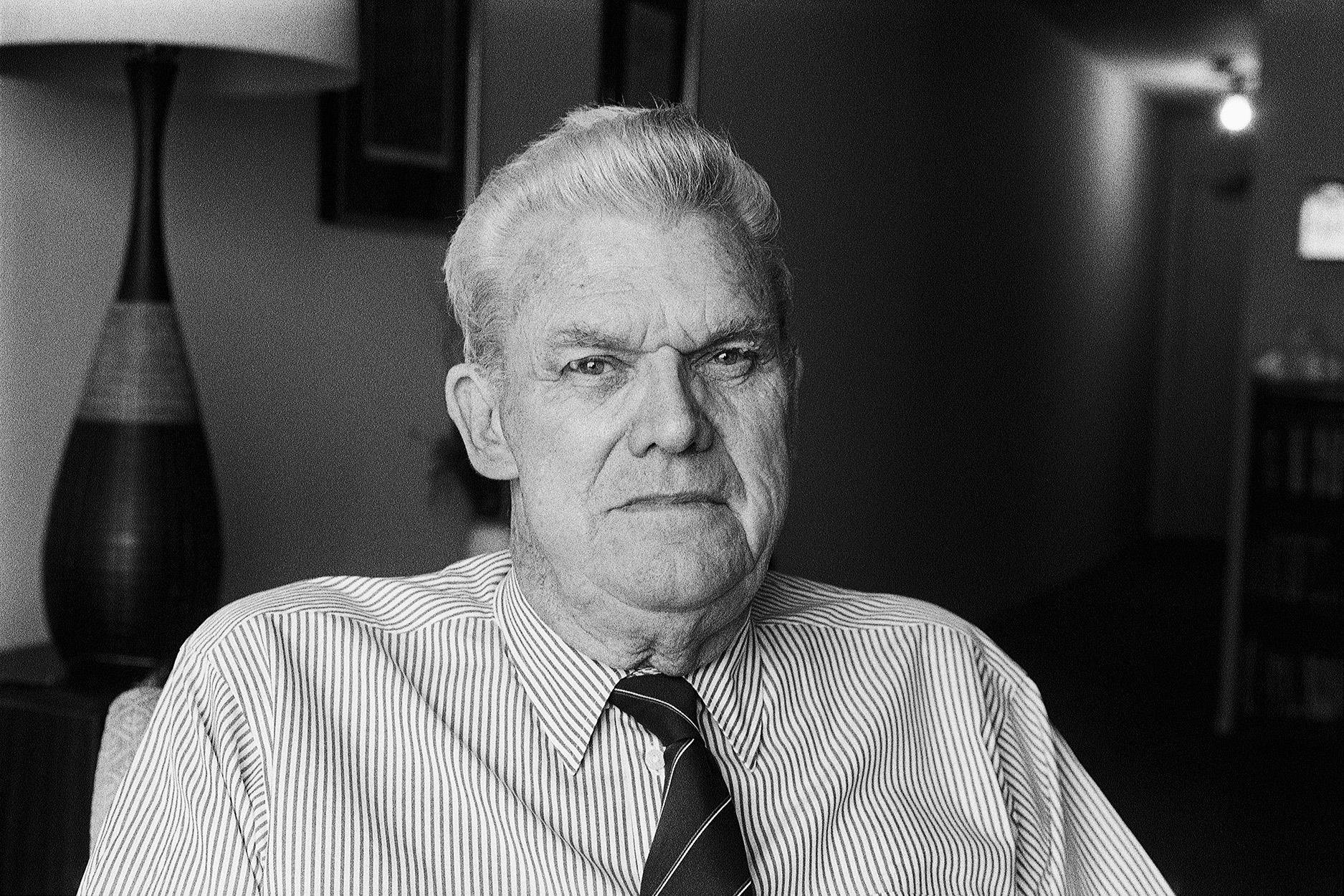 He was born in Medicine Hat, Alberta on November 2, 1929, He grew up and went to school in that little prairie town that was transformed by Word War II - with a RAF fright training school, a large prisoner of war camp, and a Biological Warfare research station all located within a few miles of the town. He left Medicine Hat to study physics at the University of Alberta in Edmonton, receiving the B.Sc. degree in 1950 and a Master’s degree. in 1952. In 1951, he married Rita Jean Bonneau of Blairmore, Alberta.

The young pair moved to California in 1952 where he began his graduate studies at Stanford University. His thesis research was performed at Stanford's High Energy Physics Laboratory from 1954 to 1958. Stanford eventually granted his Ph.D. in 1962. In 1958 he went to Paris as a "boursier" at the Ecole Normale Superieure. From then until 1961 he assisted with the construction and operation of experiments at the newly commissioned Grande Accelerateur Lineaire at Orsay, under the directorship of Professor Hans Halban. A son Ted was born during the time spent in France. Upon his return to the United States in 1961, Dr. Taylor joined the staff of the Lawrence Radiation Laboratory in Berkeley, California then returned to Stanford and the Stanford Linear Accelerator Center (SLAC) the following year.

For the next six years, he was a staff member engaged in the construction of experimental facilities for the 2 mile accelerator. When the accelerator became operational in 1966, he joined in the experiments using electron and photon beams. After his appointment tot the Stanford Faculty at the Center he continued to perform experiments in elastic and inelastic electron scattering in collaboration with scientists from SLAC and elsewhere. The inelastic experiments turned out to be of great interest since they indicated the presence of small charged objects within the proton.

Prof. Taylor and family spent the academic year 1971 72 at CERN, in Geneva, Switzerland with a John Simon Guggenheim Memorial Fellowship. Following his return to SLAC, his group continued scattering high-energy electrons including experiments on parity violation in the scattering from nucleons, confirming the predictions of electroweak unification and the “Standard Model”. Near the end of the decade the group unsuccessfully proposed to build a detector for the new colliding beam facility at SLAC known as "PEP". In 1981, he was awarded an Alexander von Humboldt fellowship, and as a result spent several months at DESY in Hamburg. While there he was appointed to the "Experiments Committee" for the new electron positron collider at CERN, and he served on that committee until the completion of the LEP accelerator in 1989.

He was appointed Associate Director for Research at SLAC in l982 and served in that capacity until 1986. Since that time he has been involved with experiments at SLAC and, in collaboration with a group from Orsay, in one of the experiments (H1) at the electron proton collider at DESY in Hamburg. Prof. Taylor retired in 2003 and now divides his time between his home on the Stanford Campus and the Rocky Mountains of Alberta. 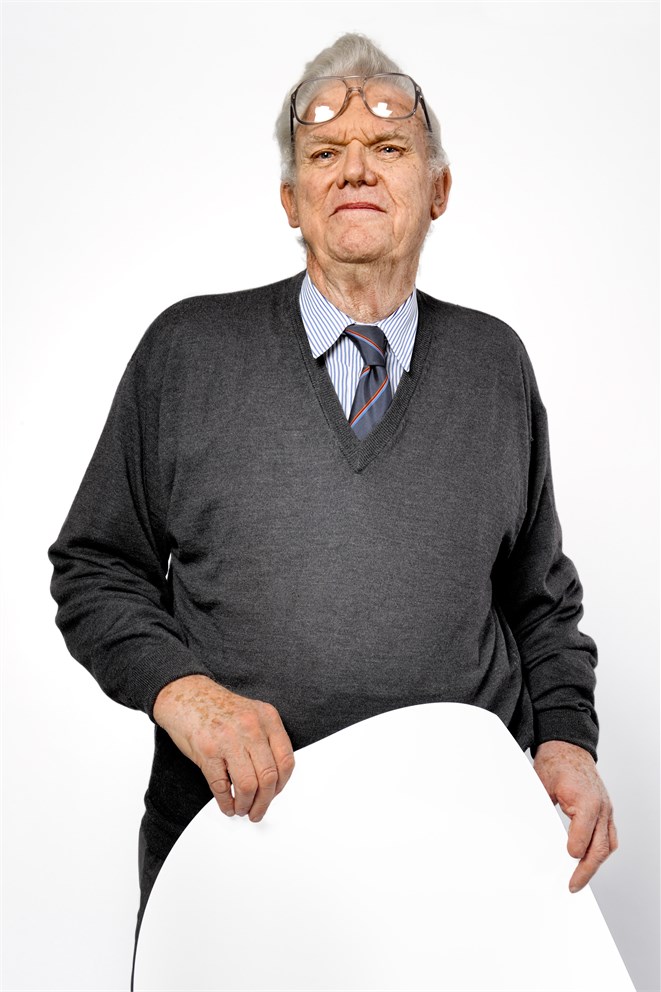 “No! I canʼt draw! I donʼt want to draw! Thatʼs a bad idea!
Why didnʼt I get 24 hours notice?” Taylor was not pleased about his
assignment. Finally, he hands me back the blank sheet of paper and
says, “Ok, thereʼs a Quark somewhere on that paper. And, I wonʼt sign it!”
Actually, we had a good time during that shoot.
What an intense person!
Skepticism is the right attitude for a scientist, after all.

Everything and Nothing
by Adam Smith

Perhaps you are looking at a page of nothingness. Or perhaps, as Volker Steger suggests by recalling Richard Taylor’s comment that “there’s a quark somewhere on that paper,” you are gazing at a page full of elementary particles. In which case, you are looking at a picture of practically everything, since quarks and the associated gluons which hold them together form the building blocks of protons and neutrons, which together account for 99% of all matter on earth.

For a rather more visible picture of quarks, take a look at Jerome Friedman’s sketch in this exhibition. Each proton or neutron, which together make up the nucleus of atoms, contains three quarks. The existence of quarks had been proposed on theoretical grounds in the mid 1960s, but multiple attempts to observe them experimentally proved fruitless. It was Friedman and Taylor, together with Friedman’s colleague Henry Kendall, who eventually demonstrated their existence in a series of experiments using a two mile long particle accelerator, a discovery which later led to their receiving the Nobel Prize in Physics.

Those experiments involved bombarding protons and neutrons (known jointly as ‘nucleons’) with very high energy electrons and recording the resulting scattering patterns of the particles after collisions. Much as the advent of the electron microscope had allowed researchers to visualise tiny structures that were invisible to optical microscopes, the high energy electron accelerator enabled Taylor, Friedman and Kendall to peak inside the nucleons for the first time, giving hints of what lay at their core. The patterns they observed revealed so-called hard scattering centres within the nucleons; the anticipated quarks.

While growing-up in Canada, Taylor had actually assumed that he would become a surgeon. But, as close observation of Volker Steger’s portrait photograph will reveal, a childhood experiment with smokeless gunpowder in his basement chemistry laboratory at home left him with fewer fingers on his left hand than a surgeon normally needs, and he turned instead to physics. Despite this encounter with the explosive side of experimentation, in a 2008 interview for nobelprize.org Taylor echoed the comments of many Laureates by lamenting the restriction of experimental possibilities for children these days. “You’re not allowed to have most of those chemicals in a home chemistry set any more,” he comments, “they’re very dull, chemistry sets