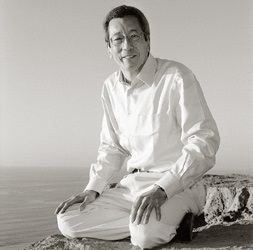 Roger Y. Tsien was awarded the Nobel Prize in Chemistry in 2008 along with Osamu Shimomura and Martin Chalfie “for the discovery and development of the green fluorescent protein, GFP”.

Roger Tsien was fascinated by chemistry from a very early age. His favourite book in kindergarden was “All about the Wonders of Chemistry”. Tsien often explained that what drew him to chemistry was the magic of changing colours, and he was able to link this obsession with applicable science in his research career.

Tsien was born on 11 February 1952 in Westchester, New York, to parents who had emigrated from China after the Second World War. His father had studied mechanical engineering at the Massachusetts Institute of Technology (MIT), where Tsien’s uncles and two older brothers had also later studied. His mother had trained as a nurse in China. The Tsiens moved to Livingston, New Jersey in 1959, and it was here that Tsien started conducting sometimes dangerous chemical experiments in the family basement or, if the experiments required a fume hood, on a picnic table in the backyard. Tsien credits this period with teaching him how to plan and improvise experiments and generally “decide how to do things better.” His childhood must have had its difficult moments, as the Tsien family occasionally experienced racial prejudice, and the young Tsien was eager to lessen his Chinese identity. As an asthmatic, he was often kept indoors rather than participating in sports activities, and this, as well as the fact that he was two years younger than his classmates, did not make him the most popular child at school. This changed when Tsien went to high school, and he was elected student council treasurer. At the age of 15, Tsien took part in a National Science Foundation-sponsored research programme at Ohio University. In the following year, he analysed the results from his experiments and submitted a paper to the Westinghouse Science Talent Search, one of the most prestigious science competitions for high school seniors in the United States, and won 1st place out of 40 finalists. Tsien is one of eight finalists of this competition to have later obtained a Nobel Prize.

Tsien split with family tradition and attended Harvard University. He took courses in various disciplines, from music to law and psychology, and for a time he discontinued chemistry courses, which he thought were badly taught. Looking for an interesting scientific alternative, Tsien tried courses such as molecular biology, oceanography and astrophysics, eventually deciding on neurobiology. Before graduating in 1972, Tsien completed an internship with Professor Nelson Kiang at the Massachusetts Eye and Ear Infirmary. Professor Kiang as well as Professor David Hubel, who would go on to win the Nobel Prize in Physiology or Medicine in 1981, advised Tsien to continue postgraduate studies in neuroscience at the University of Cambridge in England. Tsien welcomed the opportunity to study abroad and started his Ph.D. in October 1972 at Churchill College, working with Professor Richard Hume Adrian, a noted skeletal muscle electrophysiologist. Several months into his Ph.D., Tsien decided that the standard electrophysiology of the nervous system did not interest him sufficiently to continue this line of research, but he was set on designing new dyes that would visualise the multitude of signals in the nervous system. Old-fashioned chemistry had caught up with Tsien yet again, and he turned his attention to organic synthesis, which was taught to him by Dr Ian Baxter from the Chemistry department.

During his lecture at the 60th Lindau Nobel Laureate Meeting, Tsien explained what his main motivations were in science and why he chose this niche at the crossroads of biology and chemistry. He was interested in how biological systems work and wanted to see the “big picture” of molecular design, whereby colour could be used to visualise various types of information. What appealed to Tsien was that working in “architecture on a molecular scale” would provide a profound understanding of biological mechanisms, but also guaranteed a safer level of individuality. As Tsien put it, “No one will design exactly what you have.” He was running out of time in his Ph.D. with three failed projects behind him, when he approached the idea of turning EGTA, a colourless buffer which indicated free intracellular Ca2+ movements, into a specific dye molecule. Fortunately, this project was successful and the new dye, christened BAPTA, became the prototype for many Ca2+ signal-specific dyes. Tsien earned his Ph.D. degree in 1977 and remained at Cambridge as a postdoctoral fellow at Gonville & Caius College until 1981. During this period, Tsien worked with Dr Timothy Rink at the Physiological Laboratory (who introduced Tsien to his future wife, Wendy). By 1980, Tsien had developed a new fluorescent calcium indicator, quin2, which was able to function in cells without breaking them apart. The dye became commercially available in 1982.

Despite these achievements, Tsien found difficulty in securing a tenure-track position, both in Britain and the United States, largely because there were hardly any positions at the time for someone wanting to work in both biology and chemistry. Luckily, Tsien was offered an assistant professorship position at the Department of Physiology-Anatomy at the University of California, Berkeley. The department was often underfunded, and he had to manage building a research team in spartan lab conditions, but the next seven years were productive nonetheless. As Tsien pointed out in his Nobel biography, “I mention these austerities only to remind young scientists that some good research can be accomplished without lavish facilities and start-up funds.”

Tsien and his team worked on designing superior calcium ion indicators, which resulted in the achievement of fura-2, indo-2 and fluo-3, as well as an indicator for sodium ions (Na+), SBFI. These dyes have facilitated the visualisation of spatial dynamics of basic cell processes involved in calcium transport. They have been in use for almost three decades and are still currently available. As Tsien noted in his lecture in Lindau in 2010, at this point, he felt the need for more challenges and wished to be “more biochemically respectable,” hence the decision to move from working on inorganic ions to cAMP (cyclic adenosine 3’,5’-monophosphate), a second messenger found in cells, which regulates vital cellular processes. The approach was to fluorescently visualise cAMP with the use of kinase, a cAMP-dependent protein (now known as PKA). PKA possesses two subunits, regulatory and catalytic, and Tsien and his colleagues focused on labelling the catalytic subunits with fluorescein and the regulatory subunits with rhodamine. Once the presence of cAMP would cause PKA’s subunits to drift apart, this would disrupt a process known as fluorescence resonance energy transfer (FRET), where energy transfer takes place between fluorophores, which would in turn lead to the desired change in colour. The procedure proved to be a tedious task, as large amounts of PKA were required (these were shipped from the Susan Taylor lab at the University of California, San Diego), and often the dyes failed to attach to the subunits. Tsien moved his lab group to San Diego in 1989 and the method eventually worked, but at this stage they realised that it would be difficult to apply the method to proteins other than cAMP. The main drawback was the difficulty of applying the mechanism inside the cell using microinjection without damaging it. To overcome these obstacles, it was desirable to fuse genes responsible for fluorescence to proteins in cells, which would “naturally” introduce fluorescence without disrupting cell processes. In 1992, Tsien became interested in green fluorescent protein (GFP), a contaminant of the blue-luminescent protein aequorin, which was responsible for the bioluminescence of the Aequorea victoria jellyfish. GFP was discovered by Osamu Shimomura in 1962. Coincidentally, Douglas Prasher and his colleagues at the Woods Hole Oceanographic Institution had just succeeded to clone the gene for GFP and were happy to send samples of the DNA as well as frozen jellyfish tissue to Tsien and his team. By this time, Martin Chalfie from Columbia University had shown that the GFP could fluoresce in E. coli bacteria. Roger Heim, a specialist in molecular genetics, joined Tsien’s lab as a postdoctoral fellow and experiments were soon devised. The first results demonstrated that GFP had quite poor spectra, hence it was necessary to mutate GFP by tinkering with neighbouring amino acids in the hope of improving GFP’s fluorescence. This path proved to be favourable, and four new GFP alterations (yellow, blue, cyan and brighter GFP) were produced. The experiments were carried out without prior knowledge of the three-dimensional structure of the protein, which was solved by the Remington lab at the University of Oregon in 1995. Surprisingly, the groups’ joint publication of the structure of “brighter GFP” (S65T GFP) and its mutation leading to a yellow fluorescent protein was initially rejected by Science despite its novelty on the basis that the work was considered not to be significant. Once the new fluorescent proteins were developed, Tsien’s group went back to the original idea of using FRET in intracellular Ca2+ signalling by attaching blue or cyan fluorescent protein to calmodulin (CaM) and brighter GFP or yellow fluorescent protein (YFP) to M13, calmodulin’s target peptide. Atsushi Miyawaki, who conducted the experiments in Tsien’s lab, named these structure “cameleons”, a name derived from both CaM and the ability of the structure to change colours according to the amount of Ca2+. In contrast to the earlier work on cAMP and PKA, cameleons can be genetically encoded into any organism and can be precisely targeted to specific locations inside the cell, leading to significant advantages in visualising neuronal activity. Further studies, both by Tsien’s lab and other groups, have produced a wide range of colourful fluorescent proteins, with names such as banana, tangerine and cherry.

However, producing pretty colours was not the sole motivation for years of arduous and scrupulous experiments. Tsien stressed during his lecture at the Lindau Meeting in 2010 that he wished to do “something of more direct clinical relevance than providing tools for high-throughput drug screening.” There was also the personal aspect of a change in direction of research; several members of Tsien’s family had died of cancer. Even before winning the Nobel Prize in 2008, Tsien began to concentrate on activatable cell penetrating peptides (ACPPs). Polycation peptides are selectively transported into cells due to extracellular protease activity, and synthetic fluorescent molecules are thus able to migrate into, e.g., tumours to help surgeons discern between healthy and cancerous tissues, leading to less frequent tumour reappearance (for a short film illustrating the technique, please see Tsien’s 2015 lecture in Lindau, at 9:35 minutes: http://mediatheque.lindau-nobel.org/videos/34718/roger-tsien-molecules-cancer-memory/laureate-tsien).

Tsien was Professor of Pharmacology, Chemistry and Biochemistry at the University of California, San Diego for 27 years as well as an investigator at the Howard Hughes Medical Institute. His enthusiastic quest for further challenges was cut short when he died suddenly near his home in Eugene, Oregon on 24 August 2016, at the age of 64. Tsien brought a little-known scientific field into the spotlight, linking together aspects of chemistry, biology and physics as well as engineering. His work on “the fluorescent protein paintbox”, to quote the title of his Nobel lecture, not only brought a visually attractive feature to modern-day biology, but more importantly highlighted many biological processes in living cells.