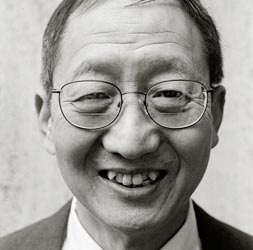 Born in Henan (China) on February 28, 1939. In 1967 doctor’s degree in Physics in Chicago. Tsui’s professional career began at the renowned AT & T Bell Telephone Laboratories in New Jersey in 1968. There he worked until 1982 together with his German colleague Horst Störmer, observing the behaviour of electrons under extreme variations in temperature. Their experiments were based upon the results of the research by Klaus Klitzing, who discovered the so-called quantum Hall effect in 1980, for which he was awarded the Nobel Prize in 1985.

The measurements made by Tsui and Störmer in 1982 surprised the physicists, as in them the Hall effect had lost his property that had been typical of it so far. Tsui and Störmer were not yet able to explain the occurrence of this Hall effect which was called “fraction quantized” or “fractionated”, but in 1983 the physicist Robert Laughlin presented his theory of the new quantum fluid. His disputed hypothesis “that in this bizarre lake of electrons a new kind of particles should form which hold only a fraction of an electron charge” could not yet by proven by experiments at that time. Together with Laughlin and Störmer, Tsui was awarded the Nobel Prize in Physics in 1998. Tsui and Störmer were honoured for the discovery of the fractionated quantum Hall effect, Laughlin for his theory of the new quantum fluid and its quasi particles.

It is true, the discovery had already been 16 years before, but just shortly before several teams of scientists succeeded in directly detecting the fractional number charges of the quasi particles in experiments. By this, Laughlin’s theory could be proven, and the intermediate states in Tsui’s and Störmer’s measurements explained. The Nobel Committee thought that the work done by the three physicists would deepen the understanding of macroscopic quantum effects and initiate the development of new theoretical conceptions in various fields of Physics.