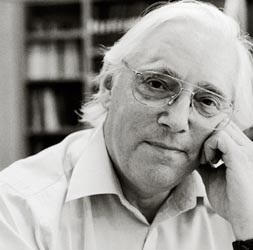 John Ernest Walker is a British biochemist, who shared the 1997 Nobel Prize in Chemistry with American Paul Boyer for their explanation of the enzymatic process that creates adenosine triphosphate (ATP), and with Jens Skou of Denmark for the first discovery of an ion-transporting enzyme, Na+, K+-ATPase. ATP is a carrier of energy in all living organisms – transporting the fuel value of food to power various biological functions – everything from building new cells, to movement, to transmission of nerve messages. It was first discovered by German chemist Karl Lohmann in 1929. During 1939–41 Fritz Lipmann (medicine laureate, 1953) showed that ATP was the universal carrier of chemical energy in the cell, and in 1948 it was first synthesised chemically by Scotsman Alexander Todd (Chemistry laureate, 1957).

Boyer began his studies of ATP in the 1950s, using isotope techniques to find how the ATP-producing enzyme “ATP synthase” functions and how it uses energy to create new ATP. He and his team at UCLA used biochemical data to propose a mechanism for how ATP is formed from adenosine diphosphate (ADP) and a third inorganic phosphate. Walker and his colleagues at the Medical Research Council Laboratory of Molecular Biology, Cambridge, determined the structure of the enzyme, confirmed Boyer’s theory, and explained its molecular basis.

Walker was born in Halifax, Yorkshire in 1941 and grew up in Rastrick, attending Rastrick Grammar School, specialising in physical sciences and mathematics. In 1960 he went on to St Catherine’s College, Oxford, and received a BA in Chemistry in 1964. He stayed on at Sir William Dunn School of Pathology, Oxford, and was awarded a D.Phil. in 1969, after which he worked abroad at the University of Wisconsin, USA and at the CNRS at Gif-sur-Yvette and the Institut Pasteur, France. In 1974, he attended a research workshop in Cambridge on the Sequence Analysis of Proteins, where he met Fred Sanger (Chemistry laureate, 1958 and 1980), who invited him to join the Protein and Nucleic Acid Chemistry Division (PNAC) at the Medical Research Council Laboratory of Molecular Biology, where he carried out his award-winning work. In 1998 he became Director of the Medical Research Council’s Dunn Human Nutrition Unit, which became the MRC Mitochondrial Biology Unit in 2008. Currently, he is Emeritus Director of the MRC Mitochondrial Biology Unit.

His early work involved demonstration of over-lapping genes in bacteriophages and proof of unconventional codons in the genetic code in mitochondria. In 1978, he began to apply protein chemical methods to membrane proteins. The enzymes from the inner membranes of mitochondria had hardly been studied from a structural point of view. Therefore, Walker began a structural study of ATP synthase from bovine heart mitochondria and eubacteria. These studies resulted in a complete sequence analysis, and in the atomic structure of the enzyme, giving new insights into how ATP is made in the biological world. In 1995, Walker was elected a Fellow of the Royal Society. He has received many international awards, including the Copley Medal, the Royal Society’s highest award.

He married Christina Westcott in 1963 and they have two daughters and two grand-daughters. 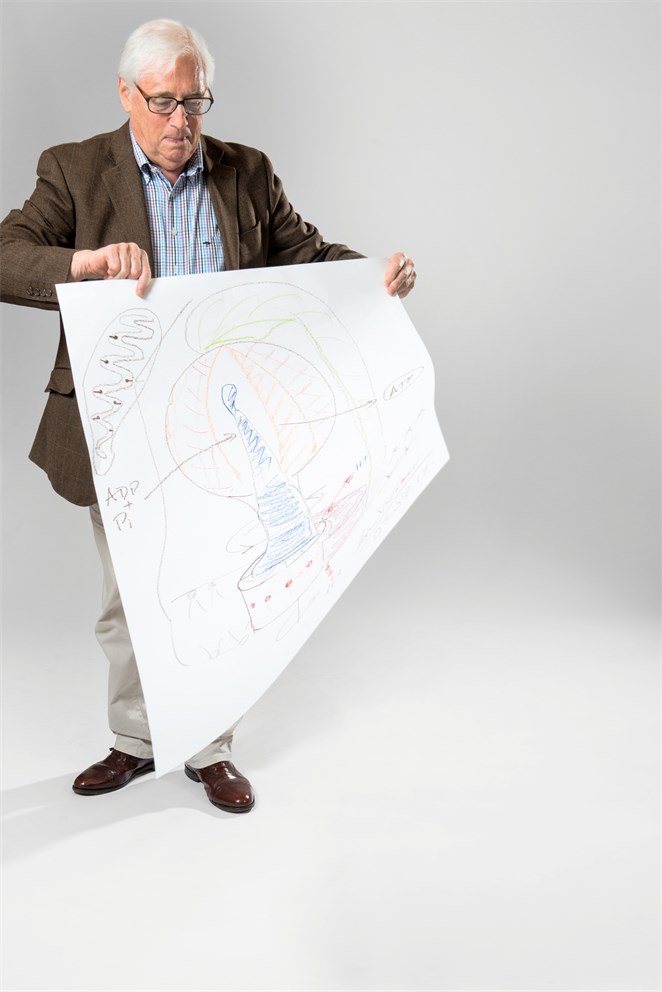 John Walker with his "Sketch of Science"

Take a close look at the factory that powers all of biology! Just as electricity powers the world around us, the ‘energy currency’ of our inner world is the molecule ATP, adenosine triphosphate. And that balloon-like object, running down the centre of the picture, is the enzyme ATP synthase, the molecular machine that makes ATP.
Every time you move a muscle or have a thought, ATP is there to make it happen. In almost every cell in your body, with the exception of red blood cells, these tiny factories are working away to make a staggering 50 to 60kg of ATP each and every day.

When Walker started working on this enzyme nobody knew what it was made up from, nor how it worked. Having identified the different protein molecules that come together to form it, he then set out to obtain a 3D picture of the enzyme using X-ray crystallography. “When I started out my colleagues told me that I was mad and that I would never succeed,” Walker recalls. “The thing I was trying to crystalize was too big, it was too this, it was too that; I didn’t have a hope in hell of making it work, and I was going to wreck my career. I did wonder about that because it took about 12 years to sort out!”

With a picture of the enzyme finally in front of him, he realised that the only way to reconcile the structure with data obtained by his co-Laureate Paul Boyer was to propose that the machine had to rotate. His radical suggestion once again brought criticism: “I was patronised by people who told me I didn’t understand enzymes and they didn’t work like that,” Walker remembers. But, as indicated by the circular arrows, it turned out that ATP synthase does indeed rotate, the bottom part of the enzyme whizzing around 100 to 200 times a second. This rotation carries the energy generated by burning sugars and fats up into the spherical part of the enzyme, where ADP and Phosphate are once again recombined to form more ATP.

“One thing people sometimes ask me is why is it so complicated, because there are enzymes around which almost certainly would do the same job? I think my answer to that,” says Walker, “ is that it has evolved over the years to generate, very quickly, very large amounts of ATP.”