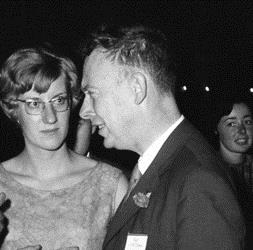 One of the greatest scientific breakthroughs, certainly in the field of medicine, was the discovery of the now famous double helix molecular structure of deoxyribonucleic acid (DNA), the substance that is the basis of heredity. Watson played a crucial role in the discovery, for which he shared the 1962 prize in physiology or medicine with Francis Crick and Maurice Wilkins.

Watson was born in Chicago, Illinois, in 1928 and attended Horace Mann Grammar School and South Shore High School. He received a scholarship to the University of Chicago and in 1943, at the age of 15, entered their experimental four-year college, receiving a BSc in Zoology in 1947. He then gained a graduate Fellowship to study zoology at Indiana University, where he received his PhD in 1950 and became fascinated by genetics. In 1951, he attended a zoological symposium in Naples, where he met Maurice Wilkins and first saw the X-ray diffraction pattern of crystalline DNA. Later that year he joined the Cavendish Laboratory in Cambridge, UK. There he met Crick and the duo teamed up to solve the DNA structure, basing their calculations on experimental evidence from King’s College plus examination of the stereochemical confi gurations of polynucleotide chains. Their first serious effort, in 1951, was unsatisfactory, and it was not until 1953 that, with more experimental evidence, they came up with the doublehelical structure.

Watson used model constructions – improvising with cardboard and glue – to experiment with possible configurations for DNA. His crucial realisation was that the four organic base nucleotides must be linked in pairs strung together to form the ‘rungs’ of DNA’s spiral ladder. The discovery was marred by controversy, however. Rosalind Franklin (1920–1958), at King’s College from 1951 to 1953, worked with Wilkins on the structure of DNA. In 1952 in a seminar she showed her x-ray photograph of hydrated DNA indicating a helix. In a draft paper from March 17, 1953, Franklin also proposed a doublechain helical structure for DNA. However, her model did not contain the crucial idea of base pairing, nor did she realize that the two chains are antiparallel.

Watson returned to the US and, from 1953–55, worked on X-ray diffraction studies of RNA at Caltech. In 1956, he moved to Harvard, rising to professor in 1961. In 1968 Watson took over Cold Spring Harbor Laboratory, NY, and made it a world centre for molecular biology, concentrating on cancer research. From 1988–92 he helped direct the Human Genome Project at the National Institutes of Health. From 1994–2004, Watson served as president of the CSHL. He remains as its Chancellor Emeritus as well as the Vice Chairman of the Dana Allicance for Brain Initiatives and Advisor to the Allen Institute for Brain Science in Seattle, Washington. Watson is an outspoken man, with a libertarian outlook on how human genetic knowledge should be used for human betterment. In 1968, he married Elizabeth Lewis with whom he has two sons, Rufus born in 1970 and Duncan in 1972. Since 1974, their primary home has been on the grounds of Cold Spring Harbor Labatory.