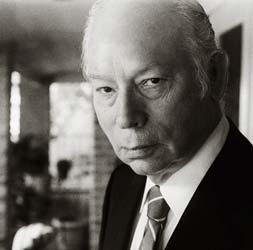 Steven Weinberg shared the 1979 physics prize with Sheldon Glashow and Abdus Salam, “for their contributions to the theory of the unifed weak and electromagnetic interaction between elementary particles, including, inter alia, the prediction of the weak neutral current.” The weak nuclear force is manifested in the phenomenon of radioactivity, discovered in 1896, but there was no mathematically consistent theory of this force until Weinberg proposed his electroweak theory in 1967. This theory was based on the idea of spontaneous symmetry breaking which Weinberg had previously applied in a successful calculation of the interactions of low energy mesons. In his theory, the photons that carry the electromagnetic force and the massive particles called W and Z bosons that carry the weak force are united in the same family of particles by an exact but spontaneously broken symmetry principle. His work, along with that of Salam, predicted a new particle, the “Higgs boson,” which is the first target of the giant new LHC accelerator at CERN. In 1979 Weinberg developed the method of effective field theories, which had already appeared in elementary form in his earlier work on low energy mesons, and has since been applied in condensed matter physics and cosmology as well as elementary particle physics. His work has also been honored with the National Medal of Science, and numerous other prizes, honorary degrees, and academy memberships in the US and abroad. The American Philosophical Society awarded him its Benjamin Franklin Medal, with a citation that said he is “considered by many to be the preeminent theoretical physicist alive in the world today.”

Weinberg was born in New York City in 1933, gained his A.B. degree from Cornell University in 1954, studied for a year at Copenhagen, and earned his Ph.D. in physics from Princeton in 1957. He worked first at Columbia and then from 1959–66 at Berkeley on a wide range of topics. At Berkeley he developed an interest in cosmology, and began to write Gravitation and Cosmology. Completed in 1971 it helped to introduce a generation of particle physicists to cosmology. He was a visiting professor at Harvard and MIT from 1966 to 1969 and a professor at MIT from 1969 to 1973, when moved to Harvard as Higgins Professor of Physics. In 1982 he went to The University of Texas at Austin where he founded the Theory Group and still works in the Physics and Astronomy Departments on cosmology and particle physics. At Texas in the 1990s Weinberg wrote his three-volume treatise on the quantum theory of fields, and in 2007 completed a treatise on modern cosmological research.

Besides his research, Weinberg has been a prominent public spokesman for science. He has written books for general readers The First Three Minutes, The Discovery of Subatomic Particles, Dreams of a Final Theory and Facing Up and is an occasional contributor to periodicals such as The New York Review of Books. He was founding director of the Jerusalem Winter School of Theoretical Physics. He met his wife Louise, now a law professor, at Cornell. They married in 1954 and have a daughter, Elizabeth.