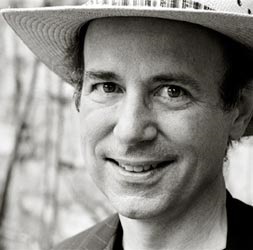 Born May 15th, 1951 in Queens, New York; studied at the University of Chicago; Ph.D. at Princeton University; 1974-81, research and teaching at Princeton; 1981-88, Chancellor Robert Huttenback Professor of Physics at the University of California in Santa Barbara; J. R. Oppenheimer Professor at the Institute for Advanced Study; 2000, moved to the Massachusetts Institute of Technology (MIT) as Herman Feshbach Professor of Physics.

Nobel Prize for Physics 2004 together with David Politzer and David Gross for their significant discoveries from the world of quarks; his other fields include cosmology and the application of field theory on condensed matter. 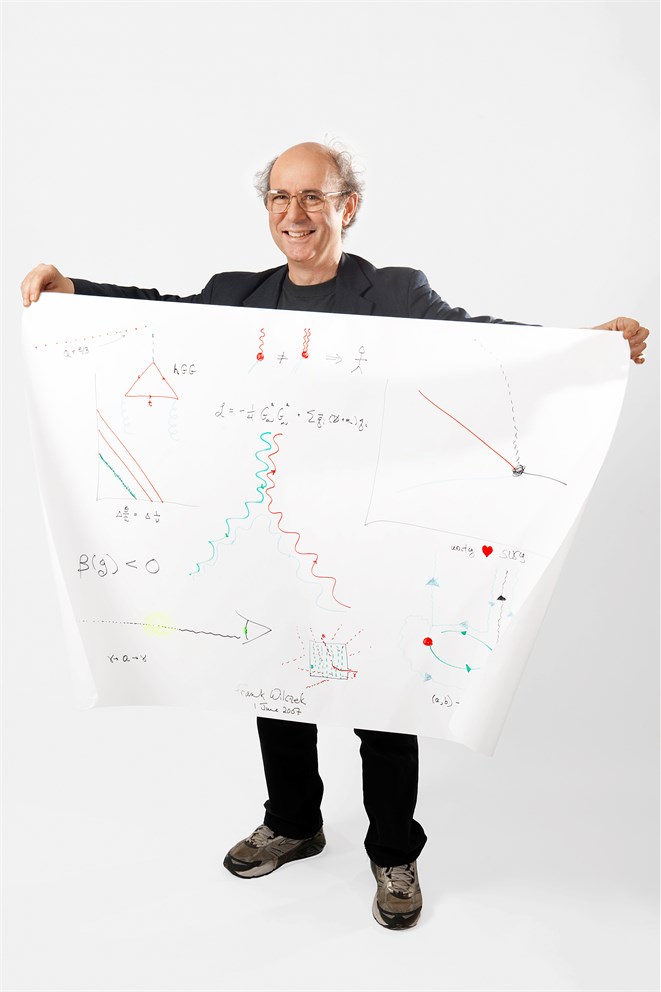 Me: “I like your shirt!”
Him: “So do I! I bought three of these!”
I guess this is the “Lightness of Being”
he refers to in the title of his latest book.

The short equation at the top of Frank Wilczek’s extensive drawing is a complete description of the strong nuclear interaction, one of the four fundamental forces of nature. The other three forces are the weak nuclear interaction (which is important for the decay of radioactive elements, for instance), electromagnetism (acting between charged particles), and gravitation. All of these forces, with the exception of gravitation, have been combined together in the Standard Model of particle physics, which underpins physicists’ understanding of fundamental particles and their interactions. The equation quoted by Wilczek and the coloured, triangular sketch below it that summarizes the same thing in diagrammatic form, encapsulate a theory called quantum chromodynamics, which he and his colleagues David Gross and David Politzer developed during the early to mid 1970s. The three jointly received the Nobel Prize in Physics some three decades later, in 2004.

Quantum chromodynamics (QCD) was developed in the wake of the three Laureates’ discovery of the property of asymptotic freedom, which describes the fact that the forces holding quarks together in a nucleon (a proton or neutron) become greater as the quarks get farther apart. This phenomenon is the opposite to what is observed in quantum electrodynamics (which describes how light and matter interact), where forces decrease with increasing distance, as we might normally expect. A consequence of asymptotic freedom is the peculiar fact that quarks, and the gluons that hold them together, cannot normally exist as isolated, observable particles, but instead must always be bound together, contained within nucleons. One of the great successes of QCD was that it was able to explain this so-called ‘confinement problem’. As Wilczek remarked in a 2004 interview with Nobelprize.org, “It was very nervous-making to be proposing a theory, all of whose ingredients were unobserved particles, none of whose ingredients were observed particles!”

QCD predicts that at very high temperatures the force between the quarks will weaken and a phase transition should occur, to give rise to a state where quarks become free, or ‘deconfined’. It is assumed that in the very early universe, quarks were moving around freely, before they became confined within subatomic particles. In the past decade or so, experiments performed in particle colliders have at last been able to reach high enough energies to demonstrate strong evidence for the experimental deconfinement of quarks.