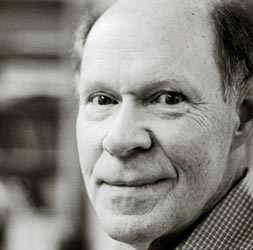 Robert Woodrow Wilson
Nobel Prize in Physics 1978 together with Pyotr Kapitsa and Arno Penzias "for their discovery of cosmic microwave background radiation".

Robert Wilson is an American physicist born in Houston, Texas, on January 10, 1936, who received the Nobel Prize in 1978 for discovering the cosmic microwave background (CMB). Interested in electronics from an early age, Wilson excelled in math and science in high school as well as being actively involved in his high school music program. Although he initially almost failed to gain admission, Wilson began college at Rice University in 1953 with a major in electrical engineering but soon changed over to physics and graduated with honors in 1957. After a summer job at Exxon, he had his first patent and then began graduate work at the California Institute of Technology. Quite undecided at first, Wilson finally found his way to radio astronomy for his Ph.D. thesis, more as a consequence of circumstances than out of specific interest.

Under the guidance of John Bolton and Maarten Schmidt, Wilson tackled the problem of mapping variations of the radiation from the Milky Way at 31 cm (about 1000 MHz) using an interferometer at Caltech’s Owens Observatory just north of Los Angeles. The interferometer, two smaller radio telescopes linked together to form an effectively much larger device, was spearheaded by Bolton, with Wilson and others helping in the final phases. During this time Wilson first came into contact with the Bell Telephone Laboratories when new traveling- wave maser amplifiers were needed for the interferometer. He was not offered a job by the company at the time and so, after receiving his Ph.D. in 1962, Wilson remained at Caltech for the following year as a postdoc before moving on to Bell Labs.

The scientists at Bell Labs had built a 20-foot large horn-reflector antenna in 1960 in Holmdel, New Jersey to receive signals sent from the Echo balloon satellite. In 1963, at the same time as Wilson’s arrival from Caltech, the antenna was no longer suited for its original purpose and Arno Penzias, having already been at Bell for two years, was making plans to convert the antenna into a radio telescope. And so the two men, the only two radio astronomers working there, soon set to work converting it. They were careful to make the modifications in a way that would not impact the sensitivity of the apparatus, as they were aware of its capabilities. The final product could make absolute measurements of celestial objects by allowing for corrections for local radio background noise from the earth and from the telescope itself. Calibration also involved reference background temperature measurements and this time the heightened sensitivity allowed the scientists to realize that a component of the background could not be accounted for by known sources.

Previous determinations of the effective thermal noise temperature contributed to a radio signal by the telescope itself, such as that performed by Edward A. Ohm in 1961, suffered from an error of about ±3 K. This is similar to the temperature (and thereby also the effective thermal noise temperature) of the CMB itself and, therefore, rendered detection of the microwave background impossible. With their equipment Wilson and Penzias were able to reduce their error to under 2 K. The first background measurements, which where of high accuracy, showed a temperature of 7.5 K which was attributable to the radiation from the sky and from the antenna itself. However, from their best estimates, the two scientists could not reasonably assign a combined temperature of more than 3.3 K to these two sources. The only recourse the they had was a complete re-assessment of the entire radio telescope, including tests for additional sources of internal radiation and repeated calibrations. In addition to again ruling out any cosmic or terrestrial radio sources, the two also removed a pair of pigeons which had nested inside the large horn antenna. Despite these efforts, only a modest reduction of the difference between the expected and measured background temperature measurements could be achieved and additional physical insight was needed to explain what had been observed.

Penzias and Wilson’s Nobel Prize-winning publication [A.A. Penzias, R.W. Wilson, Astrophysical Letters 142 419-421 (1965)] describes that the measurement of the temperature of zenith noise at 4080 MHz (a wavelength of about 7 cm) is 3.5 K higher than expected and attributes it to the CMB. The justification was supplied by a partner article written by Robert Dicke, Jim Peebles, Peter Roll and David Todd Wilkinson in the same journal just before the Penzias/Wilson report. They described theoretically how the excess measured temperature corresponds to the relic radiation (CMB) from a time when the universe was approximately 378,000 years old, called the epoch of recombination. At this point the universe cooled enough to allow the combination of electrons and protons into hydrogen, with the remaining photons, having previously interacted strongly with the plasma, becoming decoupled from matter to form the cosmic microwave background. In fact, Dicke and his group were actively building an apparatus to detect the radiation they had predicted at the time of Penzias and Wilson’s discovery. Although they did not receive credit for the discovery of the CMB, they played a key role in correctly interpreting what had been observed.

Since the discovery, it has been realized that the CMB had indeed been detected on several occasions before Wilson and Penzias. Two well-known examples are Andrew McKellar and Gerhard Herzberg in 1941 and Tigran Shmaonov in 1957. However, before Wilson and Penzias’ discovery, it was not only unknown whether the CMB existed but also if one could measure it, should it indeed exist. These questions were relatively obscure for most scientists at the time and explains why the actual discovery of the CMB was also, to some extent, a matter of chance and good fortune.

Calculations of the temperature of space first became feasible after about 1884 with the formulation of the Stefan-Boltzmann law for the emission from black bodies. In 1896, C.E. Guillaume calculated a temperature of 5.6 K while in 1926 Sir Arthur Eddington proposed a value of 3.18K. However, considering that Edwin Hubble’s observations that the velocities of extragalactic nebulae increase proportionally to their distance from the observer were first communicated in 1929, these early calculations of the ambient conditions in space should be understood as referring to the temperature resulting from the radiation of the stars in our galaxy. Only after Hubble was it accepted by mainstream science that there was a universe outside our galaxy and that it may be expanding.

This model of the universe was accepted by several scientists in the 1920s, including Hubble, Alexander Friedman and Georges Lemâıtre. Lemâıtre actually published results about an expanding universe prior to Hubble although his achievement is less well-recognized. How- ever, a competing view, known as steady state cosmology, also offered an accepted model of the universe. Continued creation of matter offsets the expanding universe so that an observer sees a similar cosmos independent of time and place.

Further exploration of these ideas led to more detailed models of the universe. In 1941 Herzberg and McKellar studied the first rotational state of the interstellar CN molecule and determined that the population of this state corresponded to a temperature in space of 2.3 K but did not connect this to any kind of relic background radiation. And in the late 1940s, the steady state model began to gain more traction with renewed theories such as that of Fred Hoyle, Thomas Gold, and Hermann Bondi in 1948. Real progress was made in somewhat unnoticed circles, with the development of the Big Bang model. George Gamow, Ralph Alpher and Robert Herman had interpreted current abundances of the elements using neutron capture cross sections and conditions assumed to be present after a Big Bang event. Although their considerations needed later amendment to remain valid, their ideas about the early universe led them to the idea of the epoch of recombination, when radiation decoupled from matter. Alpher and Herman made initial theoretical calculations of the current temperature of the universe in 1948 and 1949, and obtained a value of about 5K. Along with Dicke, Gamow and others, they continued to make new estimates in the next 15 years ranging from 3 to 50 K. In 1964, further concrete steps were taken when A.G. Doroshkevich and Igor Novikov reported the CMB to be a real and measurable phenomenon with the spectral shape of a black body.

Penzias and Wilson made their “serendipitous” discovery one year later, giving definitive evidence for the Big Bang and leading to the demise of the steady state model. The initial data on the CMB was rare, so it was not possible to determine whether the emission shape was that of a black body, but Wilson and Penzias were able to show that the spectral shape was not that of any known radio source. By the end of the 1970s, it was known, as noted by Wilson in his Nobel lecture in 1978, that the CMB had a spectrum very close to a black body at a temperature of 3K. More exact measurements by the COBE experiment in the early 1990s led to a value of 2.736 K ± 0.017 K with the measurements predicted very well by the standard Big Bang cosmological model. The COBE experiment was also able to make first detections of anisotropies in the CMB of 1 100.000, which, after further refinement, were used to study how mass in the universe clumps together into galaxies. The CMB continues today to be the most powerful tool cosmologists have to study the nature of the universe. In 2006, the Nobel Prize in physics was awarded for work on the anisotropies found by COBE and further results have been published on the subject in the last several years using the Wilkinson Microwave Anisotropy Probe and the European Planck satellite.

After his discovery of the CMB, which marks the beginning of cosmology as an exact science, Wilson took a short break from radio astronomy but soon returned to the subject, again teaming up with Penzias for a millimetre wavelength astronomy project studying the CO molecule and other simple molecules in the Orion nebula. Wilson continued on with millimetre astronomy, also in a managerial role, and also worked with industry on joint projects involving satellite communication. Further pursuing his scientific career, Wilson remained active in astronomy, studying dark gas clouds in the Milky Way, which he described as star incubators, became an adjunct professor at the State University of New York and was involved with many other scientific organizations.

In 1958 Wilson married Elizabeth Rhoads Sawin with whom he had three children and they continue to live in Holmdel Township, New Jersey.