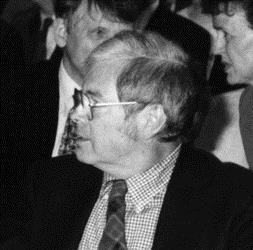 Born on June 8th, 1936 in Waltham/Mass. (USA) as the son of a chemist working at Harvard University; his mother was a graduate physicist. Wilson went to school in Wellesley and Cambridge/Mass., and also spent some time in England in Oxford before finishing at Magdalen College School in eastern Pennsylvania. Even before his stay in England he had gleaned mathematical knowledge from books, but he then turned to physics when he began his studies at Harvard at the age of 16. After graduating with an M.A., Wilson moved to Pasadena to the California Institute of Technology (Cal Tech), spent two years studying experimental nuclear physics, and also worked on the theoretical aspect of problems concerning elementary particles under the instruction of Murray Gell-Mann (1969 Nobel Prize).

After working at the General Atomic Company in San Diego (plasma physics), he moved back to Harvard University for the third year of his studies. Wilson then returned to Cal Tech to finish off his theoreti¬cal ideas. He repeatedly travelled back to his home in the East, and enjoyed the benefits of computer support and other assistance with the theorists at M.I.T. (Massachusetts Institute of Technology). In 1962, he went to Europe for a year to continue work at CERN in Geneva, first as a Junior Fellow, and then as a Ford Foundation fellow. In September 1963, Wilson became an Assistant Professor at Cornell University in Ithaca (N.Y.), where he was later given a Chair as the James A. Weeks Professor. He decided to stay here because he was having success in attempting to create a new understanding of the inner order of condensed matter in a “critical” state, i.e. during phase transitions.

He developed a theory which enabled scientists to explain not only the spatial and temporal density fluctuations of water close to the critical point, but for example also the magnetising behaviour of iron when it approaches the Curie point (770° C) and the optical appearances of critical opalescence with water. Wilson used a renormalisation process from the quantum field theory, with which it became possible to calculate the “critical exponents”, which play a major role in rearranging spin alignment in individual lattice ranges. For his successful explanation of critical phenomena in phase transitions, Wilson received the Nobel Prize for Physics in 1982.