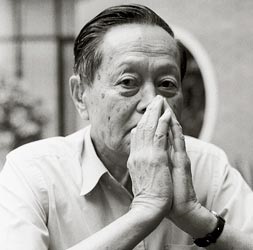 Chen Ning Yang is a Chinese American physicist who works on statistical mechanics and symmetry principles in elementary particle physics. He shared the 1957 physics prize with Tsung-Dao Lee for their theory (verified experimentally a year later by Chien-Shiung Wu) that weak force interactions between elementary particles do not have parity (mirror-reflection) symmetry. Yang is also renowned for his work with Robert Mills in developing a new gauge theory. Yang-Mills theories are now a fundamental part of the Standard Model of particle physics.

Yang was born in Hofei, Anwhei, in 1922, the eldest of five children, and was brought up on the campus of Tsinghua University, near Peiping, where his father was a professor of mathematics. Yang attended National Southwest Associated University in Kunming, gaining his BSc in 1942. Due to the Japanese invasion, Tsinghua University relocated to Kunming and it was there that he gained his MSc in 1944. In 1946 both Lee and Yang were awarded scholarships to the University of Chicago, where Yang gained his PhD in 1948 under Enrico Fermi.

He then served for a year as an instructor at Chicago before joining the Institute for Advanced Study at Princeton, New Jersey, where he became a professor in 1955. Lee joined him there in 1951, and the duo wrote several prominent articles in The Physical Review. In 1956, Yang and Lee concluded that the theta-meson and tau-meson, previously thought to be different because they decay by modes of differing parity, are in fact the same particle (now called the K-meson). Because the law of parity conservation prohibits a single particle from having decay modes exhibiting opposite parity, the only possible conclusion was that for weak interactions, at least, parity is not conserved. In 1966 Yang moved to the State University of New York at Stony Brook. After retiring from Stony Brook in 1999 he returned as an honorary director to Tsinghua University, Beijing.

Yang is a prolific author, his numerous articles appearing in the Bulletin of the American Mathematical Society, The Physical Review, Reviews of Modern Physics, and the Chinese Journal of Physics. He is a Fellow of the American Physical Society and the Academia Sinica, and received several awards, including the Albert Einstein Commemorative Award in 1957 and National Medal of Science (1986), Benjamin Franklin Medal (1993) and King Faisal International Prize (2001). Yang met his first wife Chih Li Tu while teaching mathematics at her high school in China. They married in 1950 and have three children. After Chih Li Tu died in 2003, Yang married 28-year-old student Weng Fan in 2005.