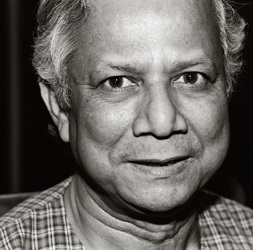 In the film It’s a Wonderful Life, George Bailey strove to improve people’s lot through the Savings and Loan Bank. In Bangladesh, Muhammad Yunus did the same with the Grameen Bank, which provides small loans to help establish businesses, particularly among women who previously had no financial independence. By helping the industrious poor to break free from poverty, Yunus helped to create economic and social development from below. By its very nature, the system also promotes democracy and human rights, improves health and helps lay foundations for lasting peace. For this, the man and the bank shared the 2006 peace prize. Announcing the award, Nobel chairman Ole Mjoes said Yunus “has managed to translate visions into practical action for the benefit of millions of people, not only in Bangladesh, but also in many other countries”.

Yunus was born in Bathua, a village near Chittagong, Bangladesh, in 1940. He studied at Chittagong College and Dhaka University, where he gained a BA in economics in 1960 and MA in 1961. He then worked as a researcher and lecturer before obtaining a scholarship to Vanderbilt University in Nashville, Tennessee, where he gained his PhD in 1969. In America, Yunus met and later married Vera Forostenko, with whom he has a daughter. The marriage failed, however, and Yunus is now married to Afrozi Yunus, a professor of physics. He remained in the US, teaching economics at Middle Tennessee State University, before moving back to Bangladesh in 1972, where he joined Chittagong University as an economics professor.

Yunus first got involved in fighting poverty during the famine of 1974 in Bangladesh. He developed various schemes, but his greatest idea was the simplest. Women making bamboo furniture had to borrow money at high interest rates to buy raw materials. By giving them a $ 27 loan at low interest Yunus allowed them to make enough profit to start fending for themselves. It is estimated the Grameen Bank has since lent a total of US$ 6 billion to nearly 7 million clients, almost all of them women. In addition to microcredit, it offers loans for education, housing, fisheries and irrigation projects and other activities. The Grameen ‘brand’ has extended into village telecommunications and the fashion industry, with ‘Grameen Check’.

Despite receiving many awards, his Nobel came as a surprise to many except, perhaps, to US President Bill Clinton, who described Yunus as “a man who long ago should have won the Nobel Prize [and] I’ll keep saying that until they finally give it to him”. Yunus said he would use his Nobel award to create a low-cost food company and set up an eye hospital for the poor. In February 2007, Yunus took his work into the political theatre by founding the Nagorik Shakti (Citizens’ Power) party.