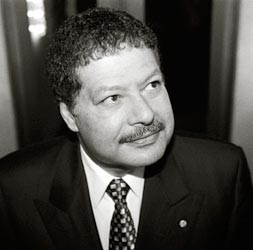 Ahmed Zewail is presently the Linus Pauling Chair Professor of Chemistry and Professor of Physics , and the Director of the NSF center, the Laboratory for Molecular Sciences (LMS), at the California Institute of Technology (Caltech).

Zewail was awarded the 1999 Nobel Prize in Chemistry. His other honors include the Robert A. Welch Prize, the Wolf Prize, the King Faisal Prize, the Benjamin Franklin Medal, the Peter Debye Award, and the E.O. Lawrence Award. From Egypt he received the Order of the Grand Collar of the Nile, the highest state honor, and postage stamps were issued to honor his contributions to science and humanity. Zewail was educated in Egypt, received his B.S. (with honors) and M.S. from Alexandria University, and Ph.D. from the University of Pennsylvania. He holds Honorary Degrees from the USA, UK, Switzerland, Egypt, Belgium, Australia, Canada, India and Italy. Zewail is an elected member of the National Academy of Sciences, the American Academy of Arts and Sciences, the American Philosophical Society, the American Academy of Achievement, and is a fellow of the American Physical Society. He is a member of the Pontifical Adademy of Sciences, the European Academy of Arts, Sciences and Letters, the Indian Academy of Sciences, and the Royal Society of the United Kingdom.

Zewail’s current research is devoted to dynamical chemistry and biology, with a focus on the physics of elementary processes in complex systems. In the Laboratory for Molecular Sciences (LMS) center, collaborative multidisciplinary research has been established to address primary function of real systems.