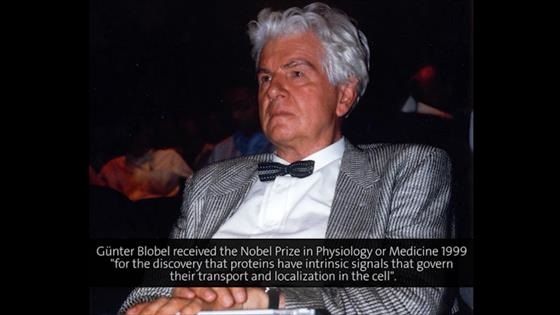 All proteins are synthesized in the cytosol [1], but not all of them are needed there. They have to travel from their birth- to their workplace and to be transported from a ribosome into one of the membrane-enclosed intracellular compartments where they exert their function. These compartments make up nearly half the volume of an average animal cell and include organelles like the mitochondria, the endoplasmatic reticulum, and the nucleus. All proteins, which are bound to leave the cytosol, have built-in amino acid sequences that determine their transport path and destination. Günter Blobel discovered these intrinsic signals in the 1970s, and in the subsequent two decades worked out the universal logistic principles of protein traffic. For this achievement he received the Nobel Prize in Physiology or Medicine in 1999. In this lecture, his second in Lindau, he does not talk about intracellular protein traffic in general, however. Speaking fast and focused, he specifically discusses current issues of nucleocytoplasmatic protein transport and traffic, a field, in which „we have learned a lot during the last five to seven years“. He wants to give his audience „a glimpse of the organization of DNA and chromosomes and the influence the nuclear envelope and its structures have on this organization“. He introduces „the cast of characters, the inventory so to speak, that regulates nuclear im- and export“. His main interest is directed to the nucleopore complexes (NPCs). The surface of a typical nucleus contains between 2000 and 3000 of them. With a molecular mass of about 125 Megadaltons they have 25 times the size of a ribosome. „One million molecules per minute can be transported in and out of the nucleus through these nuclear pore complexes.“ [2]Within the nucleus of eukaryotic cells, DNA is tightly packaged together with histones and other proteins into chromatin fibers. Under the light-microscope one can distinguish two states of chromatin, the highly condensed heterochromatin and the less condensed euchromatin. These states reflect to what extent regions of the DNA are available for transcription (euchromatin) or not (heterochromatin). Interestingly, euchromatin is usually found directly under the NPCs, while heterochromatin is located along the nuclear lamina between the NPCs. Therefore, Blobel hypothesizes, NPCs „influence the state of chromatin condensation, compaction or opening“. Ultimately, he says, “it would be nice to be able to manipulate the chromatin” by targeted protein traffic.Resembling the general rules of protein transport, nuclear im- and export of proteins relies on intrinsic sequences. These sequences are recognized by transport factors, which bind both to an NPC and the respective protein to guide it through the nuclear gate. An important group of these factors are the karyopherins, which Blobel introduces as being „crucial for the dialogue between the nucleus and the cytoplasma that we want to listen into to understand the function of chromatin“. To decipher the language of this dialogue is a daunting task and one of the big challenges of molecular cell biology. Not only because „there are thousands of different substrates that have a nuclear lifestyle“, but also because the detailed structure and functional organization of the NPCs is difficult to reveal in detail. Ten years after this lecture in Lindau, Günter Blobel is still at the forefront of scientific progress in this field. [3]Joachim Pietzsch[1] With the exception of very few that are synthesized in mitochondria or plastids[2] Assuming that a typical mammalian cell contains 3000 to 4000 NPCs and „that each NPC can transport up to 500 macromolecules per second“ makes the performance even more impressive, see B. Alberts et al., Molecular Biology of the Cell, Fifth Edition, 2008, Garland Science, New York, USA, p. 705[3] As his profiles and publication list on the websites of the Rockefeller University (http://www.rockefeller.edu/research/faculty/abstract.php?id=225) and the Howard Hughes Medical Institute (http://www.hhmi.org/research/nucleocytoplasmic-traffic) show