The Three-Dimensional Structure of a Membrane Protein (German Presentation) 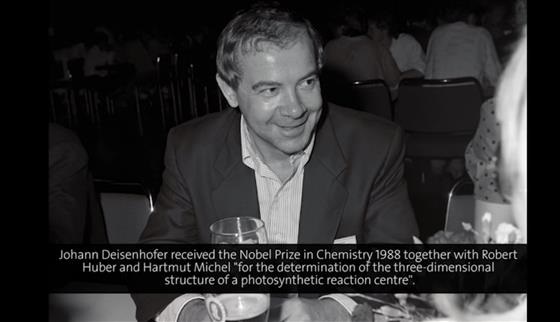 Sometimes scientists have to wait for decades until their work is crowned by a Nobel Prize, sometimes only for a few years. The latter was the case for Johann Deisenhofer, Hartmut Michel and Robert Huber. In their collaboration that started in 1982 they succeeded in killing two birds with one stone: They elucidated the first structure of a membrane protein - seemingly impossible before - and thereby shed light on the mechanisms of the most important chemical reaction on earth. „When you ask Bragg’s favourite question: ‚What is the structure trying to tell you?’ you find it gives you a very good idea of how photosynthesis works. It is a fantastic achievement...” Max Perutz praised this breakthrough in November 1984 as the currently „most exciting event“ in the field of X-ray crystallography and thought of its originators as „my next candidates for the Nobel Prize in Chemistry“. And indeed they received it already in 1988 and first came to Lindau in the following year. Tying in with the lecture of his co-laureate Hartmut Michel who had focused on problems of crystallization of membrane proteins two days before, Deisenhofer offers a detailed insight into the photosynthetic reaction centre of the bacterium rhodopseudomonas viridis whose structure they had solved together with Robert Huber. Based on a schematic overview of the reaction centre with its four protein subunits and 14 non-protein cofactors, and combining structural information with recent results from spectroscopy, Deisenhofer nicely demonstrates the principle of the light-driven electron flow, which leads to a rapid charge separation and thus enables the construction of energy-rich molecules. After a photon has been caught by one of the many light-harvesting complexes in the cytochrome subunit, it is thrown back and forth like a ball between these complexes until it reaches a special pair of chlorophyll molecules. The photon’s energy puts the special pair into an excited state. With a time constant of 2,8 picoseconds it consequently transfers an electron to pheophytin, a type of chlorophyll. From there the electron is passed across the membrane within 200 picoseconds to the tightly bound quinone A, and then, in a parallel movement to the inner membrane surface and a longer time frame of about 100 microseconds to the exchangeable quinone B. The latter is able to accept two electrons in a row. Acting as an electron ferry, it carries them back through the membrane to the chloroplast at the extracellular side of the membrane. The net effect of this cyclic electron flow is the generation of a continuous proton gradient between the periplasmatic and the cytoplasmatic side of the membrane, which drives the engine of ATP synthase to build nature’s prevailing currency of chemical energy.While much progress has been made since 1989 in understanding photosynthesis and some of the questions that Deisenhofer addresses in this lecture are answered today, it beautifully mirrors the fascination of the beginning and of the adventure to explore a hitherto uncharted scientific territory.Joachim Pietzsch