How do Regulatory Sites Communicate with Active Sites in Regulatory Enzymes? 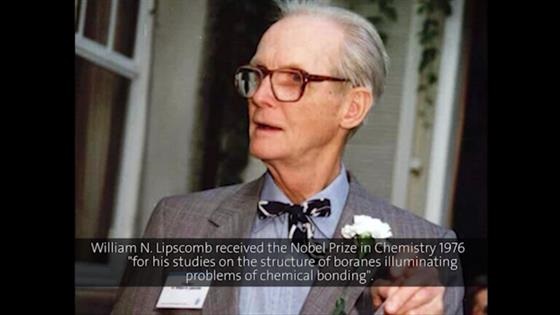 Without disrespect or exaggeration, we may characterize William Lipscomb as the member of a relay team that created knowledge on the nature of chemical bonds and the course of chemical reactions and carried it forward through time. He received the baton from his teacher Linus Pauling, recipient of the Nobel Prize in Chemistry 1954 "for his research into the nature of the chemical bond and its application to the elucidation of the structure of complex substances", and passed it on to his student Roald Hoffmann who shared the Nobel Prize in Chemistry 1981 with Kenichi Fukui for his theories „concerning the course of chemical reactions“. His own studies on the structure of boron hydrides (boranes), which did not only determine the structure of those compounds but also illuminated general problems of chemical bonding, began in the early 1950s and earned him the Nobel Prize in Chemistry 1976. Pauling’s mentorship meant much to him, as he humorously remembers in this Lindau lecture: „He told me on boronhydrates and I knew everything he told me was wrong, and I learned from him that it’s not so bad to be wrong. It’s bad to be uninteresting! Because his ideas have been stimulating!“

Combining quantum mechanical calculations and means of X-ray diffraction was one of the hallmarks of Lipscomb’s borane research project. Therefore it was only natural that in the decades after the reception of his Nobel Prize he began to focus on X-ray crystallography. He elucidated the structures of large and complex enzymes and analyzed their mode of action. In this lecture, he talks about the function and regulation of two enzymes he had recently studied in his laboratory: Fructose-1,6-biphosphatase and aspartate carbamoyltransferase. The latter catalyzes the first step in the biosynthesis of pyrimidines. „About six steps down the metabolic pathway there is generated cytidine triphopshate, which is a precursor of DNA and RNA - one of four - and it inhibits the enzyme at a site which is 60 angstrom away from the active site.“ Lipscomb describes in detail the interplay between these two and other binding sites of this 300 kiloDalton enzyme with its twelve subunits, which is today regarded as „an archetypal example of allosteric modulation of fine control of metabolic enzyme reactions“.[1]

Fructose-1,6-bisphospatase is a key enzyme in gluconeogenesis and helps to fill our glycogen reservoir. „You need it to come through the night“, says Lipscomb. Its opponent is phosphofructokinase, which catalyses the reverse reaction (i.e. phosphorylation) in glycolysis. To avoid simultaneous anabolic and catabolic activity at the same pace in the same place, both enzymes therefore need tight control. Fructose-1,6-biphospatase is controlled at its active and at an allosteric regulatory site. Lipscomb illustrates in atomic resolution how these control mechanisms work. Inhibition of fructose-1,6-bisphospatase at its allosteric regulatory site by compounds that mimic AMP but bear little structural resemblance may prove to be an effective treatment for type 2 diabetes, he explains, and mentions that he is collaborating with a pharmaceutical company to develop such an inhibitor. Lipscomb’s latest paper on this subject stems from the year 2005 (when he was 85 years old)[2], and while fructose bisphospate inhibitors have not been approved yet, they are still regarded as a potentially important class of novel antidiabetic agents.