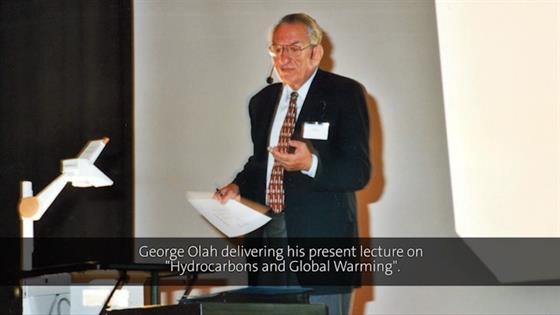 George Olah received the 1994 Nobel Prize in Chemistry for "for his contribution to carbocation chemistry". By the use of so-called superacids, Olah was able to prepare long-lived carbocations – molecules containing a carbon atom with a positive charge. Carbocations had long been assumed to be important intermediates in organic reaction mechanisms but were too short-lived to be detected with the methods available at the time. The present lecture is not concerned with carbocations, but with a topic which is related only in a wider sense: global warming due to mankind’s carbon dioxide emissions. The talk is almost identical to Olah’s first lecture in Lindau, which he gave four years earlier in 1998. It revolves around the general idea of re-using carbon dioxide, emitted from factories or powerplants, to generate methanol by chemical methods. Olah furthermore describes a novel type of fuel cell, developed by him and others, which can directly convert methanol to electrical energy, not requiring actual combustion.Olah’s vision of the future of energy supply, set in a time in which all fossil fuels have been depleted, involves the heavy use of nuclear powerplants, providing sufficient energy for the generation of methanol from carbon dioxide. Fuel cells could then replace the currently predominant fossil fuels in cars and other machines currently relying on combustion engines. For applications requiring long-chain hydrocarbons, e.g. the production of plastics, methanol could equally serve as a source of carbon via its dehydration to ethylene, according to Olah. As a “collateral effect”, climate change due to excess carbon dioxide in the atmosphere would be stopped.Olah appears to be convinced that his suggestion of a methanol based economy can resolve energy crisis and global warming at the same time. While his long-term vision appears to have some conceptual flaws (where will carbon dioxide for the synthesis of methanol be collected if fossil fuel combustion is not feasible anymore?), certain technical aspects of his overall concept are highly topical. Olah and others discuss them in more detail in the book “Beyond Oil and Gas: The Methanol Economy, 2nd, Updated and Enlarged Edition” (Wiley, ISBN: 978-3-527-32422-4), which is recommended to the interested reader.David Siegel