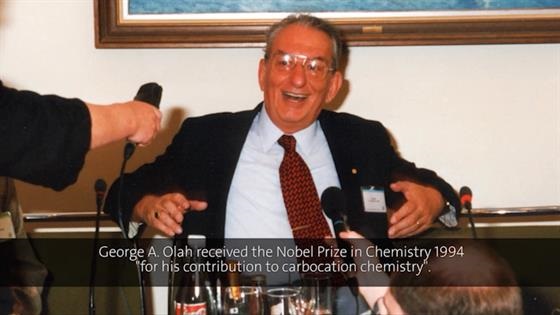 Climate change due to mankind’s carbon dioxide emissions is a highly topical and controversial issue. As such it is also frequently discussed in the Inselhalle, the venue of the Lindau Nobel Laureate Meetings. Usually, in such discussions a great deal of effort is put into answering questions like: does anthropogenic climate change actually exist or is it a mere myth? Can we measure climate change reliably? What exactly is its extent? Should we be worried about it? And if yes, how can we reduce carbon dioxide emissions?In his first Lindau Lecture, 1994 Chemistry Laureate George Olah takes a refreshingly different approach to the subject. He calls it the approach of a “simple chemist”. Olah’s line of thought is based on the statement that even if climate change should be as harmful as predicted by many, mankind still has undeniable needs. The ongoing growth of the world’s population will require more energy and more industrial raw materials rather than less. Since avoiding growth is not a viable option, other, scientific solutions have to be found, according to Olah.On this basis, he suggests not to reduce the carbon dioxide emissions, but to deal with them appropriately where they occur in their most concentrated form: at powerplants and factories. If the carbon dioxide emitted there could be collected and subjected to chemical processes, it could subsequently be converted to valuable raw chemicals, Olah explains. In detail he suggests to convert carbon dioxide to methanol by a catalytic processes, which had been investigated in his laboratory for quite some time. The yielded methanol could then be used for synthetic fuels, which could power vehicles even after earth’s fossil fuel reserves run out.That Olah’s suggestion is not an immediate solution to the energy and climate change problems at hand is due to the fact that the catalytic process he mentions requires energy to work. Mining for fossil fuels is still much more energy efficient. Olah’s ultimate vision for earth’s future thus involves strong investments in nuclear energy. According to him there is in fact no way around this form of energy generation. However, on the basis of an abundant energy supply, the “chemical recycling” of carbon dioxide to methanol would be feasible. Although Olah reminds the audience not to take his “solution” to climate change all too seriously, the collection of carbon dioxide at major pollution sites (the so called “carbon capture and sequestration” approach) has become a very active field of research and various storage and/or conversion strategies have been proposed. Time will have to tell whether Olah’s scientific optimism in the spirit of “Don’t regulate, innovate!” can provide a solution to some of mankind’s most pressing concerns. David Siegel