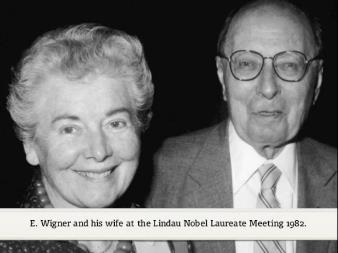 Instead of an abstract, the text below is a short introduction by an editor.

While the Nobel Lectures held by the Laureates in Stockholm usually (but not always) tell the story of the discovery, invention or improvement that the Nobel Prize was given for, the lectures in Lindau often reflect quite different topical issues. Eugene Wigner participated in four meetings, but only lectured twice. The present lecture, his last, concerns the fundaments of quantum mechanics, a subject that had kind of a renaissance in the late 1960’s and in a way came of age in 1970 when a summer school, organized by the Italian Physical Society, took place in Varenna. I happened to be there and remember Wigner lecturing on his very special interpretation of the quantum mechanical measurement process, where the mind of the physicist is involved in getting the measurement apparatus display a definite result! At the time I thought that this was just a game played by a mathematically minded scientist, but afterwards I understood that Wigner really took his interpretation seriously and that during this time, he played an important role in making studies of the fundaments of quantum mechanics/physics become established as a regular field of study. Wigner’s affiliation was Princeton University and among scientists in the know, there was a new “Princeton interpretation” of quantum mechanics as opposed to the classical “Copenhagen interpretation” worked out by Niels Bohr and others around 1930. In retrospect, this and other alternative interpretations and extensions of quantum mechanics have had their main impact in pushing the development of experimental tests into a realm, which was unthinkable for Bohr and other founding fathers of quantum mechanics. So far the Copenhagen interpretation rules, but many important experimental techniques have found use in other branches of physics, such as quantum cryptography and computation.