Discovery of the electron 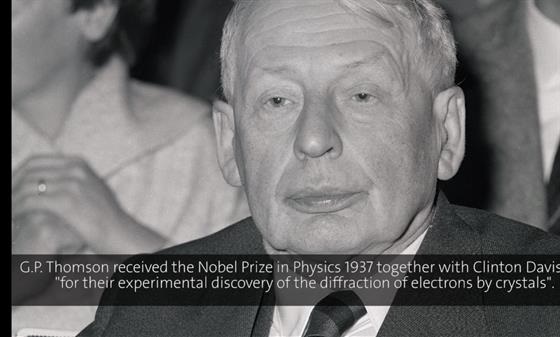 We who are working with the sound recordings of lectures from the Lindau Meetings usually call these lectures “historic”. But I feel that the lecture by G.P. Thomson in 1965 then ought to be called a historic “historic” lecture. Because the story that Thomson tells starts already with Faraday and Maxwell, continues with a whole group of physicists studying cathode rays at the end of the 19th century and follows up the understanding of the electron both as a particle and as a wave to around 1930. One of the main questions around 1896, the year Alfred Nobel passed away, was: Are these rays composed of waves or are they particles? One strong wave adherent was Philipp Lenard, who received the 1905 Nobel Prize in Physics “for his work on cathode rays”. One who believed in particles was Thomson’s own father, J.J. Thomson, who received the 1906 Nobel Prize in Physics “in recognition of the great merits of his theoretical and experimental investigations on the conduction of electricity by gases”. J.J. Thomson performed a whole set of experiments that showed the particle properties of electrons. G.P. Thomson tells the story in great detail, putting stress on the developments in experimental techniques, such as vacuum pumps. He also finds the time to tell some jokes, as, e.g., William Henry Bragg stating that the electron behaved as a particle on Monday, Wednesday and Friday, as a wave on Tuesday, Thursday and Saturday and as nothing at all on Sunday! It is a common joke among physicists that J.J. discovered that the electron is a particle and the son G.P. that it is a wave, but this joke is not told in the lecture. Instead G.P. Thomson in some detail relates how he got to know the initial observation of Clinton Davisson, that electrons are diffracted by crystals, and how he turned that into an investigation which was rewarded with a Nobel Prize. Anders Bárány