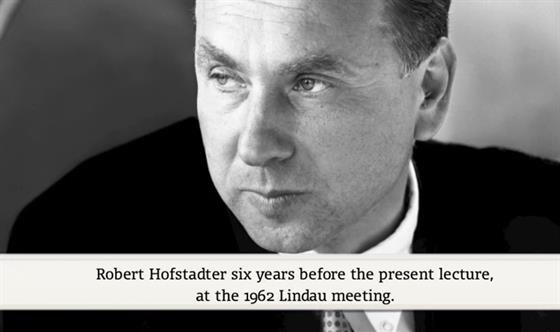 In 1962, Robert Hofstadter’s first lecture at the Lindau Meetings concerned the investigation of electron scattering from atomic nuclei, for which he received the Nobel Prize in Physics of 1961. He was then around 45 years old and could have easily taken a step back from active research to increase his activities on a “Nobel platform”, e.g. in research politics, like quite a few of Laureates did. Then his future Lindau lectures could have become, more or less, repetitions of the first one. But Hofstadter did choose another path. As he states in the present lecture, which is his second in Lindau: “I’ve been working in the field of electron scattering for a number of years and after a while you get tired of it and you start looking around for something different to do”. His will to change research direction is unusual, but not unique. Donald Glaser, e.g., who received the physics prize “for the invention of the bubble chamber” the year before Hofstadter, did choose to go into brain research. The step that Hofstadter took was not as radical as Glaser’s, the new field of study was still physics, but of another kind. Since he obviously liked to come to Lindau to lecture, the Mediatheque now contains no less than four lectures in which Hofstadter, step-by-step, reports on the background and progress of his new research field: total absorption detectors for gamma ray spectroscopy. One reason for him to go into this field certainly was the construction of the 20 GeV electron accelerator at SLAC. Hofstadter makes use of ideas he had already in the 1940’s: To use crystals that emit light when hit by the gamma rays. With large enough crystals, the light emitted is a measure of the energy, thus crystal detectors can be used for spectroscopy. Hofstadter tells the story in a clear and pedagogical way, using the blackboard as he did in his first lecture, ending with a short slide show. As this is the first of the four lectures on the new detectors, the number of slides is still rather small.