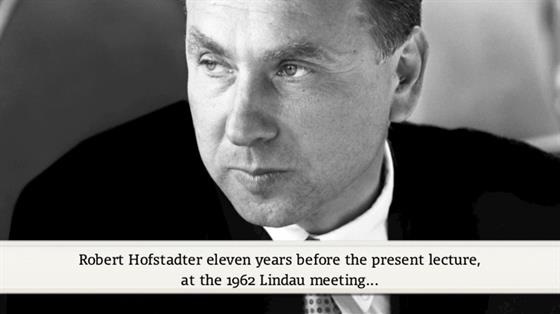 Robert Hofstadter’s 1971 lecture is the second one relating to his new research field: total absorption detectors for gamma ray spectroscopy. His lecture follows upon the one by Paul Dirac, entitled “Fundamental Problems of Physics”, which sadly enough seems to be lost. Still, Hofstadter uses Dirac’s lecture to make a very good point, namely that to solve profound questions in physics, you may need experiments! The experimental equipment is usually developed in many small steps and Hofstadter’s lecture gives an example of this. Little progress had been made since the 1968 report, but one positive thing was that even though budgets had been cut meanwhile, his project had survived! Initially, Hofstadter was planning for a detector to be used at SLAC, where the maximum energy was 20 GeV, but now he raised the goal to 500 GeV to accommodate the energies of the new accelerator at Fermilab. He actually mentions even higher energies in cosmic rays, detectable on Earth or in satellites. One of his arguments is that the higher the energy, the easier is the detection. If the energy is high enough, you might just stick out your finger and feel the impact! Hofstadter also compares his detector technique with one used by another group at SLAC, which had constructed a large iron spectrometer weighing several thousand tons. A similar detector for 500 GeV would be big as a battle ship, while his crystal detectors were measured in centimeters. Already in the 1940’s, Hofstadter had realized that crystals of NaI could be used as total absorption detectors for gamma rays and other particles. After further tests in the 1960’s, he now had decided that NaI doped with Tl gave the optimal crystals. Such crystals can be grown large enough to stop high energy particles while still being transparent so that the light emitted can be detected by photomultipliers. Since there was a change in the usual Medicine / Chemistry / Physics order of the Lindau Meetings, Hofstadter came back again already in 1973!