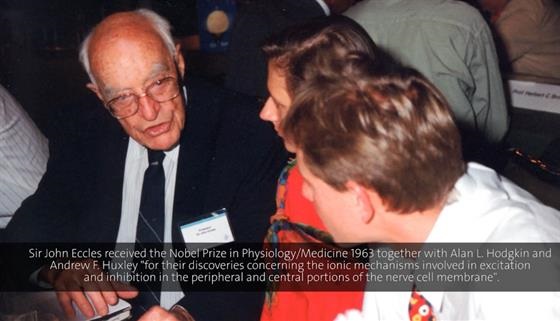 The 1992 Lindau Meeting was dedicated to chemistry. This might have been the reason for Sir John Eccles to entitle his lecture “How subtile chemistry evolving in the mammalian brain opened it to the world of feeling”. However, who expected a chemical lecture was to be disappointed. As in most of the other lectures Eccles gave in the last 20 years of his life, his 1992 Lindau lecture concerned what he called the “brain-mind problem”. How do the mind, which Eccles defined as “what we are aware of by direct apprehension apart from sensory perception” and the brain interact [1]? And, in more technical terms: how can a non-materialistic mental event influence the matter-energy system of the brain?

Eccles in fact did find answers to these questions. In the year of this talk, he published a rather keen solution to the brain-mind problem [2], in which he proposed that a quantal emission of transmitter molecules is the ultimate functional mechanism for the interaction of mind and brain. This theory, which turned out to be difficult to prove experimentally, was, however, not accepted by the scientific community [1].

A striking feature of Eccles’ career, which culminated in the 1963 Nobel Prize for Physiology or Medicine, was a pronounced concern with questions of science theory and philosophy. Eccles was particularly impressed by the work of his friend, philosopher Karl Popper, whom he first met in 1945. In his writings on scientific method, Popper rejected the so-called inductive method in favour of the deductive method. In the inductive method, a theory is derived from exemplary observations:

All the swans we have seen so far are white.
Therefore, all swans are white.

Popper’s deductive method, on the other hand, required the formulation of a hypothesis, which allowed predictions that were testable, and so falsifiable, by experimental observations [1]. It is curious to know that Eccles, who had previously postulated that synaptic transmission is electrical in nature, took Popper’s suggestions by heart. Between 1945 and 1947, he developed a model which allowed the experimental testing of electrical synaptic transmission [1].

However, the results of the ensuing experiments, which took place in 1951 in Eccles’ own laboratory, were to prove the model of electrical synaptic transmission wrong. As a consequence, Eccles had to reject his electrical theory in favour of a theory involving chemical transmission. Being awarded a 1963 Nobel Prize for this work, appears to be an adequate consolation.