The Combustion of Alcohol in the Liver (German presentation) 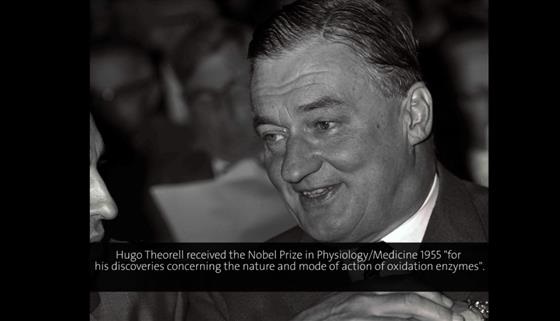 In 1933 Hugo Theorell obtained a Rockefeller fellowship, which allowed him to work in the laboratory of 1931 Nobel Laureate Otto Warburg in Berlin-Dahlem. Warburg, a founding father of the emerging field of enzymatic biochemistry, should later call him “Master of Enzyme Research”, a unique compliment [1]. Theorell’s excellent experimental skills were furthermore explicitly acknowledged in the presentation speech to his Nobel Prize, which he should receive in 1955. In the speech it was pointed out that“A most important part of Theorell’s researches has been concerned with the velocities of enzyme reactions and the factors which influence them, factors which determine the directions into which the enzymes force the processes in living organisms. These experiments are not only of basic importance but may be considered model investigations in enzymology.” [2]The present lecture brilliantly exemplifies Theorell’s expertise in studying enzymatic reactions. It is concerned with the enzyme alcohol dehydrogenase, which is responsible for the oxidation of ethyl alcohol (the colloquial alcohol found in wine, beer and spirits) as well as thousands of other alcohols of different chemical structure in the liver. Alcohol dehydrogenase oxidizes ethyl alcohol to acetaldehyde. This is the first step of the detoxification procedure that takes place in our bodies after alcohol consumption. Without alcohol dehydrogenase, we would get drunk and stay drunk much more easily. Acetaldehyde is later oxidized further to acetic acid and eventually carbonic acid. Until this is accomplished acetaldehyde causes the typical hangover headache encountered after boozy nightlife. That the importance of alcohol dehydrogenase goes beyond dealing with the consequences of alcoholic drinks can be seen from fact that even fish, which are usually not in contact with large quantities of ethyl alcohol, possess this enzyme, as Theorell points out. He furthermore describes some of the enzymes’ properties mentioning, for instance, that it requires the cofactor NAD+. In the course of the conversion of alcohol to aldehyde, NAD+ is reduced to NADH. Today we know that NAD+ and NADH partake in a wide range of redox reactions. For the first time, this redox behaviour was shown in the laboratory of Otto Warburg. Theorell goes on to mention several of his experiments which aimed at influencing the reaction rate of alcohol dehydrogenase. While he was not successful in enhancing the reaction rate, he details that the compound pyrazole can successfully block the enzyme. If pyrazole was administered to mice, they stayed drunk longer after alcohol consumption, Theorell explains and speculates with a wink that this insight might be abused by people to get drunk with less alcohol.He closes his talk with an anecdote on the benefits of fundamental research. Being asked by a member of a scientific funding body which sicknesses he could heal with his research, Theorell replied: “None.” adding that before repairing something, you have to understand it. Just as the watchmaker has to understand the watch, before it can be fixed. David Siegel[1]T. Raju, Lancet, 1999, Volume 353, Issue 9166, page 1807.[2]http://www.nobelprize.org/nobel_prizes/medicine/laureates/1955/press.html