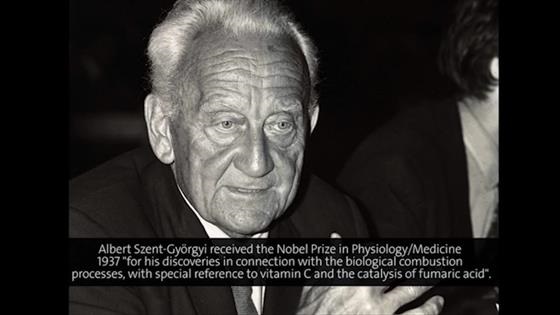 Albert Szent-Györgyi’s second Lindau lecture is his first with the word "cancer" in its title. To understand why, one has to consider also both his life and his theory of life. This had been formulated already in the early 1940’s and instead of the more normal ”molecular biology” made use of what he called "electronic biology". His argument was that the biological molecules are large and slowly moving, while a theory of life would need something that can explain rapid change, this something being electrons. In order to construct his theory, he proposed that protein molecules in a structure can act as semiconductors. This would mean that electrons could be excited into conduction bands, leaving movable holes in the molecular structure. Such processes are rapid enough to match the processes of life, but the more detailed mechanisms of Szent-Györgyi’s theory are somewhat hazy. In his lecture, he tells about meeting Linus Pauling and Pauling, already from a distance is shouting "Proteins are not semiconductors!". After WWII, Szent-Györgyi emigrated to the US and at first started doing research on muscle fibers, supported by a private organization. He made several important contributions, but at the end of the 1950’s his interest turned to cancer. He at first worked with the thymus gland and extracted both substances that promote growth and such that retarde growth. Since cancer tissues grow indefinitely, the idea was to retard this growth using the latter substance. But it turned out to be impossible to find out exactly what the substance was and the idea was scrapped. In the early 1970’s, Szent-Györgyi became privately funded to do research on cancer. He then used the framework of his electronic biology and put forward theories, e.g., on how normal cells turn into cancer cells by the action of very reactive molecules, so called free radicals. Anders Bárány