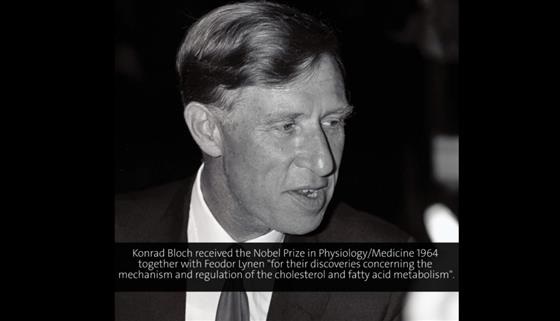 Konrad Bloch, who shared the 1964 Nobel Prize in Physiology or Medicine with Feodor Lynen, was an expert in the biochemistry of lipids. He introduces this first Lindau lecture of his, given five years after he received the award, by pointing out that lipids had long been outsiders in the arena of biochemical research. Bloch attributes this to the fact that, historically, the biochemical role of lipids could not be sharply defined. Whereas sugars were thought to be responsible for energy storage, proteins for the catalysis of biochemical reactions and DNA for information storage, the role of lipids was fuzzy, Bloch says. This allowed proteins and DNA to take over the scientific stage, whereas lipids remained on the sidelines. But what are lipids to begin with? Contrary to DNA and proteins, which are biopolymers constructed from recurring building blocks, lipids are non-polymeric small molecules. All lipids have an apolar, hydrophobic (water-repelling) part. In addition, some lipids have a polar, hydrophilic headgroup. Such lipids are referred to as amphiphilic: they are both polar and apolar. This allows them to spontaneously form structures like micelles or the lipid bilayers surrounding our bodies’ cells. One important role of lipids is thus in fact a structural one.However, the 1964 Nobel Prize in Physiology or Medicine was not given for the elucidation of lipid structures, but for “discoveries concerning the mechanism and regulation of the cholesterol and fatty acid metabolism”. Both cholesterol and fatty acids are typical lipids. While cholesterol’s main function in our bodies is indeed also linked to cell membrane structure {LINK to Lynen 1972}, fatty acid metabolism is of prime importance for another major prerequisite of life: biochemical energy storage.In his talk, Bloch describes a range of experiments, done with simple model organisms like algae or yeast, which all aimed at taking the next big step in lipid research. After he, Lynen and others had established how important classes of lipids are made, the detailed role of these lipids in our body’s biochemistry moved into the focus. According to the level of knowledge at the time, Bloch’s rather technical talk focuses on the two major roles of lipids mentioned above: structure and energy. Today (2013) we know that lipids also play key roles in signalling. Some lipids are signalling molecules themselves. This includes, for example, eicosanoids, which are involved in inflammation and neurotransmission processes, or prostaglandins, which regulate the contraction of certain types of muscles. In addition, lipid rafts present in cell membranes have more recently received increasing attention. Such rafts can sense intra- or extracellular stimuli and thus activate signalling cascades [1].From a today’s perspective, Bloch’s initial statement on the versatile biochemical roles of lipids thus seems even more to the point. It might be noted, though, that in the decades that have passed since his talk, our knowledge on other biomolecules has grown as well. Today, we know, for example, that, like lipids, sugar molecules play an important role in signalling processes and that the role of proteins goes way beyond the catalysis of biochemical reactions. In some instances the borders between the substance classes even disappear completely: glycolipids are molecules containing both a lipid and a sugar part, glycoproteins are built from proteins and sugars. The simplistic views that Bloch saw as a major cause for lipids long being the underdog in biochemical research, are thus most definitely outdated. David Siegel[1]K. Simons, D. Toomre, Nature Reviews Molecular Cell Biology 1 (2000) 31.