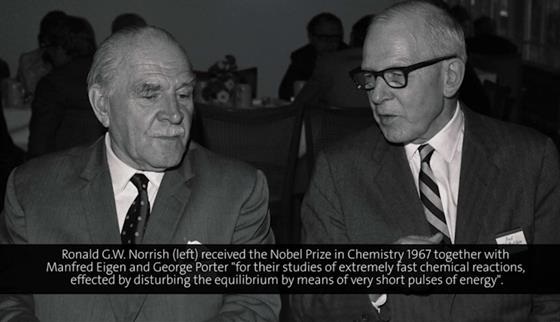 In broad terms, this lecture of Ronald Norrish concerns chemical mechanisms of combustion in general and the combustion of ethane, a simple hydrocarbon composed of two carbon and six hydrogen atoms, in particular. It is one of the more technical lectures in the Lindau Mediatheque.Combustion of ethane, for example in an ethane flame, entails the oxidation of its two carbon atoms by aerial oxygen. If combustion goes to completion, two molecules of carbon dioxide and three molecules of water are yielded for each ethane molecule. All in all, ethane is a very simple compound and its combustion reaction appears to be straightforward. However, there is a magnificent multitude of chemical reactions taking place along the way from hydrocarbon to carbon dioxide and water. Their number goes into the hundreds, if not thousands. Many of the chemical species involved are short-lived radicals (i.e. compounds with unpaired electrons). For some compounds, like ethane, this rich “flame chemistry” can lead to unusual phenomena. One of them is the possibility of slow combustion via cold flames. Such flames are based on incomplete combustion mechanisms that do not go all the way to carbon dioxide and hence do not release all the energy available from carbon oxidation. Cold flames burn non-vigorously and emit little heat and light. Their temperature is typically less than 400 °C. If done in an enclosed vessel, slow combustion may, like rapid combustion, lead to an explosion, however, the “induction period”, i.e. the time between the initiation of combustion (ignition) and the actual explosion is rather long and lies in the range of minutes. In his lecture, Norrish focuses exclusively on this very aspect. Using his own data and work of others, he tries to explain on chemical grounds, why such a long induction period occurs upon slow ethane combustion. For Norrish, this question of detail boils down to a simple issue: is the intermediate responsible for the long induction period a peroxide or an aldehyde? At the time of the talk, this question was by no means resolved and there were supporters of both options. Norrish vouches for the aldehyde. Judging from our current scientific knowledge, Norrish asked a question which was too much of the either/or type. Owing to the complex nature of combustion chemistry, several reaction pathways overlap. In recent simplified mechanisms, the major species delaying the onset of the explosive stage is neither an aldehyde nor a peroxide but something that may be viewed as a combination of both, a so-called alkylketohydroperoxide [1].Slow ethane combustion is a rather narrow subject and not one that could be expected to attract a Nobel Prize. And indeed, Norrish’s award was not motivated by this particular topic but by the development of a fundamental technique allowing its study: flash photolysis. In flash photolysis, molecules are excited by a short flash of light, which triggers chemical reactions, the products of which can be detected by spectrometric methods. The technique allows for the study of rapid processes, such as combustion, and is still heavily applied for combustion studies. Norrish’s involvement in the development of flash photolysis might thus explain his affiliation to the topic of combustion, which he calls “an old love of his” in the introduction of this talk.David Siegel[1] J.C. Prince, F.A. Williams, Combustion and Flame 159 (2012) 2336.