Where are we Drifting to? (German presentation) 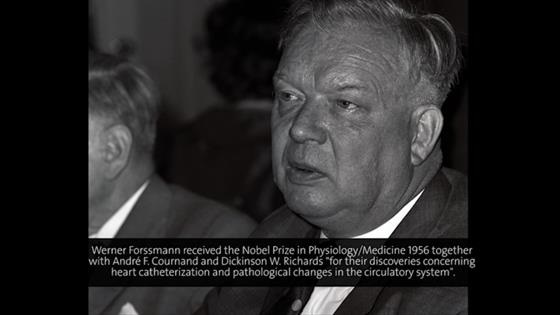 A wise old man speaks to his grand children and shares with them in a true and trustworthy tone his concerns about the world of their parents. With his talk, he apparently hits the mark and meets the zeitgeist of a decade, which was still pervaded by the clash of generations that had characterized the sixties. This is the prevailing impression, Werner Forssmann’s fifth lecture in Lindau evokes. Three times, his thoughts are interrupted by applause, namely when he says that a true democrat needed to have the ability to surrender his own advantage for the sake of the common good where required; that it would be questionable, if we were really still free, even if the word freedom was frequently and loudly repeated in the Western world; and that it would’t help to blame the young generation for their insurrection or escape into drugs, when they obviously had been left alone by a generation of war-traumatized parents who afterwards had placed material well-being above all.Humankind has lost its spiritual centre because science and the humanities are removing from each other at an increasing pace. Egotism and greed govern the world and education is submitted to economic utilitarianism. The breath-taking success of science and technology tempts humankind to live in a frenzy of power. These are Forssmann’s central concerns. Yet not science has brought us into this situation, but its flawed application by men. „One accuses the tools of their wrong use and requires them to put into order again what was caused by the mind that should have guided them.“ On the other hand, Forssmann says, scientists tend to display a certain hubris, neglecting the world-changing power of ideas, which cannot be expressed in numbers or equations. Overall, enormous educational efforts would be necessary to bring the human spirit back into a healthy balance, to make scientific insights both accessible to lay audiences and give them a sound philosophical basis, and to remind us all of our joint responsibility for the world we live in. What makes Forssmann’s appeal so friendly and convincing is that he does not present himself as superior or flawless, although he is a living legend of his time. As a young surgical resident at the age of 25, he had performed on himself the first cardiac catheterization and thereby achieved „one of clinical cardiology’s greatest advances“[1]. As a consequence of this self-experimentation, however, he was regarded an outcast. He had to bury his hopes of having an academic career in cardiology. He pursued urology in subordinate positions instead. In 1932, he joined the National Socialist Party, a mistake he later regretted bitterly, and which was „a life-long source of grief and anguish“[2] for him. After the war, he wearily returned from a prison camp and worked as a lumberjack for three years, before he was allowed to return to his medical profession again. He worked as an urologist at a small hospital in the rural town of Bad Kreuznach, when in 1956 the Nobel Prize news reached him. He was flabbergasted – and, as he recalled in his memoirs, felt like a village parson who all of a sudden had been elected pope.The humanism of this lecture certainly mirrors Forssmann’s scientific heroism and clinical experience. Its wisdom, however, primarily flows from a deep self-reflection on own disappointments and mistakes. [1] Heiss HW. Werner Forssmann: A German problem with the Nobel Prize. Clin. Cardiol. 1992; 15: 547-549. [2] Forssmann-Falck, R. Werner Forssmann: A pioneer of cardiology. Am J Cardiol 1997;79:651–660. A very readable memoir, written by his only daughter, the youngest of his six children.Joachim Pietzsch