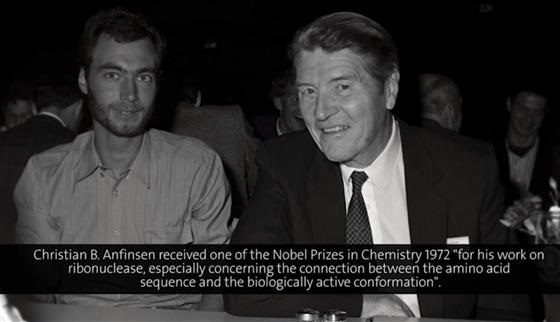 Genetic engineering was a dual challenge for the eminent protein scientist Christian Anfinsen. He „was a thoughtful critic of the potential misuses of biotechnology and genetic engineering at a time when many of his colleagues were swept up by their promise“[1]. And he remained skeptical towards its ability to synthesize all kinds of proteins. He rather emphasized the prospects of classical protein chemistry. „At the same time while this DNA recombinant methodology has improved so enormously, there has been in a sort of quiet, secret way a great deal of improvement in the methodology of protein chemistry, particularly in the organic synthesis of peptides, even quite large ones,“ he remarks at the beginning of this lecture and briefly mentions the advances in protein purification technologies before discussing current protein engineering activities. „We have all been using the Merrifield solid phase method mostly“, says Anfinsen, paying his respects to Bruce Merrifield who had received the Nobel Prize in Chemistry just two years before in 1984 for his invention of solid phase peptide synthesis, which had culminated in the synthesis of the enzyme ribonuclease A with its 124 amino acids in 1969. Anfinsen also reminds his audience of „the fact that the purest polypeptide made synthetically was made entirely by hand that is to say not machines“. This is a tribute to Erich Wünsch who succeeded with his group in Munich in synthesizing the hormone glucagon with its 29 amino acids in 1967.In vitro peptide synthesis - as opposed to in vivo synthesis through genetic engineering - is difficult because each amino has two functional groups, which can enter into a peptide bond. To synthesize proteins in a controlled manner, i.e. in an intended sequence, functional groups that shall not be involved in the reaction must be shielded by protecting groups. In liquid-phase synthesis, the separation procedures, which are therefore necessary after each synthetic step, cause a considerable loss of product and diminish the peptide yield dramatically. Only small peptides with less than ten amino acids can be produced this way. The solid-phase procedure facilitates synthesis and increases its yield by attaching the first amino acid through its C-terminus to a solid polymer. This method is suitable for automation. The N-terminus of the growing peptide chain is protected by either t-boc (tert-butyloxycarbonyl) or Fmoc (9-fluorenylmethyloxycarbonyl). Anfinsen briefly discusses the characteristics of both groups and then suggests „another extension of protein synthesis“.He calls this method „stitching“ and means „sewing together large pieces“ of proteins to synthesize an even larger one. He reports how in his lab at the Johns Hopkins University the stitching technique had already been used „with considerable success“ when applied to pieces of staphylococci nuclease. He reports on similar experiments with thioredoxin. „If one could make large peptide fragments synthetically, it’s possible to stitch them together and regenerate the original protein“. Appropriate chemical site-directed mutagenesis could support this process. Anfinsen’s suggestion may have sounded anachronistic in the decade that witnessed the launch of the first genetically engineered insulin and other recombinant drugs. Yet even the genetic code has its limitations and not all proteins or their analogues can be engineered by harnessing the forces of bacteria, yeast and the like. Chemical synthesis is here to stay. Anfinsen’s suggestions were far-sighted, foreshadowing, for example, the introduction of native chemical ligation as a means of synthesizing large proteins in the mid-1990s. Joachim Pietzsch[1] The U.S. National Library of Medicine: Profiles in Science: The Christian B. Anfinsen Papers; http://profiles.nlm.nih.gov/ps/retrieve/Narrative/KK/p-nid/19