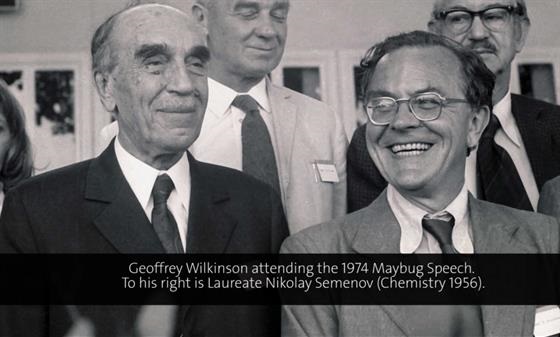 Sir Geoffrey Wilkinson (1921-1996) was one of the pioneers of modern inorganic and organometallic chemistry. A wealth of organometallic compounds (i.e. compounds, in which a carbon based, organic molecule is bound to a metal atom) was synthesized and characterized in his laboratory at the Imperial College in London. In 1973, one year before the present lecture, Wilkinson shared the Nobel Prize in Chemistry with Ernst Otto Fischer for coining the concept of organometallic sandwich compounds. Wilkinson and Fischer had previously elucidated the structure of the most prominent organometallic sandwich compound: ferrocene (an iron cation sandwiched between two cyclopentadienyl rings). This work was a major stimulus for the overall development of organometallic chemistry and led to a range of important organometallic compounds, which are used as catalysts for large-scale technical processes or in synthetic organic chemistry.In the beginning of his talk, Wilkinson mentions some prominent examples such as the titanium-based Ziegler-Natta catalysts (Nobel Prize in Chemistry 1963 to Karl Ziegler and Giulio Natta), which are used to this day in the production of major plastics such as polyethylene (e.g. for bags and bottles) and polypropylene (e.g. for stationery, car parts, laboratory equipment). The main part of the present lecture, however, is dedicated to the discussion of some new organometallic compounds with a particular focus on transition metal alkyls (compounds with a hydrocarbon bound to a metal centre), which are at the core of many important catalytic processes, such as the Monsanto process (today replaced by the CATIVA process) producing acetic acid from methanol. Wilkinson points out that transition metal alkyls are difficult to synthesize because they are easily degraded via a beta-hydride elimination, yielding an alkene (an unsaturated hydrocarbon) and the transition metal hydride. Knowing this, one can design systems, in which the beta-hydride elimination is impossible, thus yielding stable complexes. This can be done by blocking coordination sites on the metal or by using an alkyl group lacking a hydrogen atom in its beta-position. Using a bulky alkyl group is another means to reduce reactivity and increase complex stability, Wilkinson points out. These concepts are nowadays well-established and part of most chemistry curricula. This is inter alia due to Wilkinson’s own textbook Advanced Inorganic Chemistry, one of the standard works in the field.Still, there are a few routes to synthesizing a new transition metal alkyl, which are not typically found in textbooks: towards the end of his talk, Wilkinson reports intriguing results achieved by some of his more sloppy students “who cannot calculate”. In the synthesis of hexamethyltungsten, for example, using half of the required reagent and not degassing the used solvent led to a successful synthesis, whereas students who worked with the “right” amounts and solvents failed. Another case concerns a rhodium catalyst, which showed a fascinating, unusual reactivity towards alkanes, which disappeared completely when the responsible student thoroughly cleaned the employed reactor. Sometimes, using dirty solvents, reactors and wrong calculations just seems to do the trick... even for Nobel Laureate level research. David Siegel