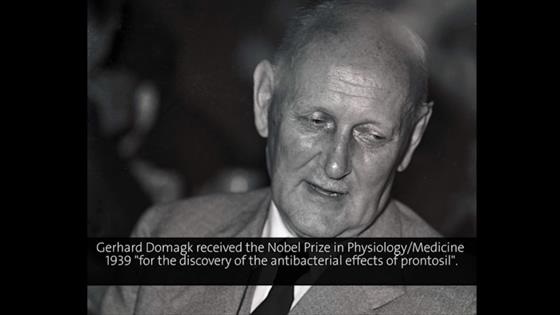 „30 years ago we were not able to treat any bacterial infectious disease causally“, Gerhard Domagk reminds his audience in this third and last lecture he gave in Lindau and mentions child bed fever, pneumonia and meningitis as exemplary diseases „where we had to leave it to chance whether a patient succumbed to the disease or survived it“. It was Domagk’s discovery of a red sulphonamide dyestuff being effective against streptococcal infections he made on Christmas Eve 1932, „which was destined to bring undreamed-of advances in chemotherapy“[1]. Launched three years later under the trade name prontosil this compound was the first sulpha drug and the first antibiotic agent, a medical breakthrough that earned him the Nobel Prize in Medicine or Physiology in 1939. As a reaction to the award of the Nobel Peace Prize 1935 to Carl von Ossietzky, however, Hitler had forbidden Germans to accept a Nobel Prize, so that Domagk, like Richard Kuhn and Adolf Butenandt, could not receive his diploma and medal before the end of the war. Nevertheless, according to paragraph 9 of the statutes of the Nobel Foundation, their prize money was lost for them and added to the Foundation’s restricted funds.When Domagk finally gave his Nobel lecture in December 1947, he entitled it „Further progress in chemotherapy of bacterial infections“ (Penicillin had become available in 1941)[2]. Yet the lecture mainly dealt with the danger of emerging resistance. „We already see the first signs that, if treated patients are not subjected to a very thorough check-up, penicillin - like the sulphonamides - is being misused, with the inevitable result that resistant strains will survive and then spread“, Domagk cited his colleague Clark.[3] Those concerns had even grown at the time of this Lindau lecture, and Domagk therefore emphasizes the necessity of preliminarily testing the sensitivity of pathogens instead of indiscriminately applying new antibiotics at increasing doses when „harmless sulfonamides or penicillins fail“. He explains the difference between primary resistance („Microbes that do not respond prevail once the susceptible ones have been destroyed“) and secondary resistance („develop during treatment by mutation“), and he reminds the doctors-to-be who listen to him that antibiotics cannot substitute a proper hand desinfection when lives shall be protected and nosocomial infections avoided.The last twenty minutes of his talk are devoted to a review of current tuberculosis chemotherapies, which had been introduced since 1945. Domagk presents four groups of tuberculostatics: p-aminosalicylic acid (PAS), thiosemicarbazones, streptomycin and isonicotinic acid hydracide (INH). He discusses their efficacy and tolerability and the emerging development of resistance of tuberculosis bacteria against them. „This resistance can be overcome by combination therapies“, he says. „Resistance against three different drugs, which target three different enzymatic systems of the tuberculosis bacterium does not exist and probably will never exist.“ With hindsight, this was an optimistic prediction. Today’s initial standard therapies include four drugs (INH, rifampicin, ethambutol and pyrazinamide) and the challenge of multiple drug-resistant TB (when both INH and rifampicin fail) calls for the inclusion of even more antibiotics into effective treatment regimens. Bacterial resistance obviously leaves wide room for future research. “I am convinced that resistance is no scary problem” Domagk concludes this lecture. “It can be overcome and confronts us with an unexpected wealth of interesting scientific questions.”Joachim Pietzsch[1] cf. Award Ceremony Speech:http://www.nobelprize.org/nobel_prizes/medicine/laureates/1939/press.html[2] cf. Nobel Prize in Physiology or Medicine 1945http://www.nobelprize.org/nobel_prizes/medicine/laureates/1945/[3] cf. Domagk’s Nobel Lecture, p. 495f. ref. to. Clarke, "Penicillin: help or hindrance in venereal disease control?", J Soc. Hyg., No. 9 (1945). http://www.nobelprize.org/nobel_prizes/medicine/laureates/1939/domagk-lecture.pdf