Hemoglobin as Receptor for Drugs: Stereochemistry of Bonding 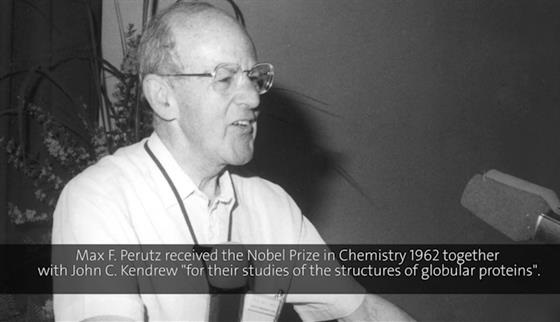 Max Perutz was one of the founding fathers of X-ray crystallography – and a pioneer of medicinal chemistry. „I shall be very happy to continue my collaboration with you and do X-ray crystallography analyses of the binding sites of potential antisickling drugs that you develop“, Max Perutz wrote in a letter to Donald Abraham, a chemist from the University of Pittsburgh, on February 3, 1984. „This work is now entering a very interesting phase. By determining difference electron density maps of a variety of known drugs and of new synthetic compounds, the various possible binding sites in haemoglobin are being mapped, and are falling into some kind of order.“[1]

Perutz and Abraham had first met at an Airlie House conference in Washington in 1980. Abraham had been a student of Alfred Burger, the founder of The Journal of Medicinal Chemistry in the 1960s. In the 1970s he had begun to focus his research on the rational design of drugs to treat sickle cell disease by targeting hemoglobin. He was quite isolated in his efforts, however. So he plucked up courage and approached the Nobel Laureate who reacted very positive: „My spirits rose to the heavens“, Abraham later recalled. „I was invited to the best laboratory in the world, not with recommendation letters or CV, but on an idea. This I learned was a hallmark of Max’s genius. Good ideas, whether his or others, were treasured. Formalities were not to stand in the way...“.[2] Between 1980 and 1988, Abraham visited the Laboratory of Molecular Biology in Cambridge 16 times, and Perutz was appointed to a visiting lectureship at the University of Pittsburgh from 1983 to 1986. In this year, Max Perutz held his first lecture (in German language) in Lindau – and offered fascinating insights into his collaboration with Abraham and their groundbreaking studies of how small molecules bind to proteins. The “wonderful method of computer graphics” was instrumental for these studies and during his lecture Perutz shares his enthusiasm for this innovation, which makes chemistry “beautiful and easy”, in a movie of about ten minutes length. It shows “for the first time the stereochemistry of the interactions between different drugs and a protein” and is much applauded. Even if one cannot see the movie in this audio file, Perutz’ comments are clear enough to catch its content by listening.

Sickle cell anemia is caused by a point mutation in the beta-chain of haemoglobin. A single hydrophilic residue (glutamic acid) is replaced by a hydrophobic one (valine). This leads to a polymerization of hemoglobin at low oxygen tensions and consequently to a deformation of red blood cells during systemic circulation. The deformed erythrocytes may obstruct the blood flow in capillaries. Increasing the oxygen affinity of sickle cell hemoglobin by allosteric regulation of the mutated protein could offer a possibility to treat the disease. In this regard and supported by hematologists at the INSERM in Paris, Perutz and Abraham explored the structural interaction between hemoglobin and three drugs that already had been approved for different indications, namely the lipid-lowering agents clofibrate and bezafibrate and the loop diuretic ethacrynic acid. For different reasons, which Perutz describes in detail, all three drugs failed to become antisickling drugs. Nevertheless, Perutz’ observations nurtured the field of medicinal chemistry: “A drug can shift the allosteric equilibrium within a protein receptor into the same direction as the natural effector, although chemically not related to it (…) This is due to the fact that protein molecules are so large that they offer a lot of binding sites, which are not used by nature and hence can be harnessed for pharmacological effects.”