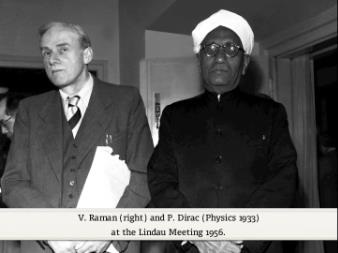 The Indian physicist Venkata Raman only participated in one Lindau meeting. He was the second non-Western world Nobel Laureate to lecture in Lindau, the first being Hideki Yukawa. The latter gave a lecture already in 1953 and also returned for the 1956 meeting. The presence of both Raman and Yukawa at the same meeting can be looked upon as an early indication that the Lindau meetings would become more and more international, both as regards the speakers and the audiences. For the young people in the audience, the history of Raman’s discovery of the so-called Raman effect and how it eventually led to the Nobel Prize in Physics, would have been an interesting lesson. It may actually have been told by Raman at one of the more social gatherings, when the Nobel Laureates mingled with the audience, but we have no record of this happening. Raman was a specialist on wave phenomena, both classical and quantal, and could also have given an interesting lecture on musical instruments. Instead he chose to lecture on the physics of crystals, in particular on the theoretical models describing the heat vibrations of the atoms in the crystal lattice. In 1907, long before receiving the Nobel Prize, Albert Einstein published the first primitive quantal model, in which each atom was described as a quantized oscillator. This model worked quite well, except at very low temperatures where it did not agree with measurements of, e.g., the specific heats. Another future Nobel Laureate, Peter Debye, then took the next step and constructed a more refined quantal model built on a quantization of the vibrational modes of the whole crystal. Debye’s model had the right behaviour at very low temperatures, but had other shortcomings that a third future Nobel Laureate, Max Born, improved on with his lattice dynamics theory. In his lecture at the Lindau meeting, Raman speaks out (rapidly and in German) against the models of Debye and Born. Instead he puts stress on the fundamental aspects of Einstein’s model, not mentioning its problems at low temperatures. Since the crystal models of Debye and Born have survived and are still taught at universities all over the world, my interpretation is that Raman’s 1956 critique was not completely justified!