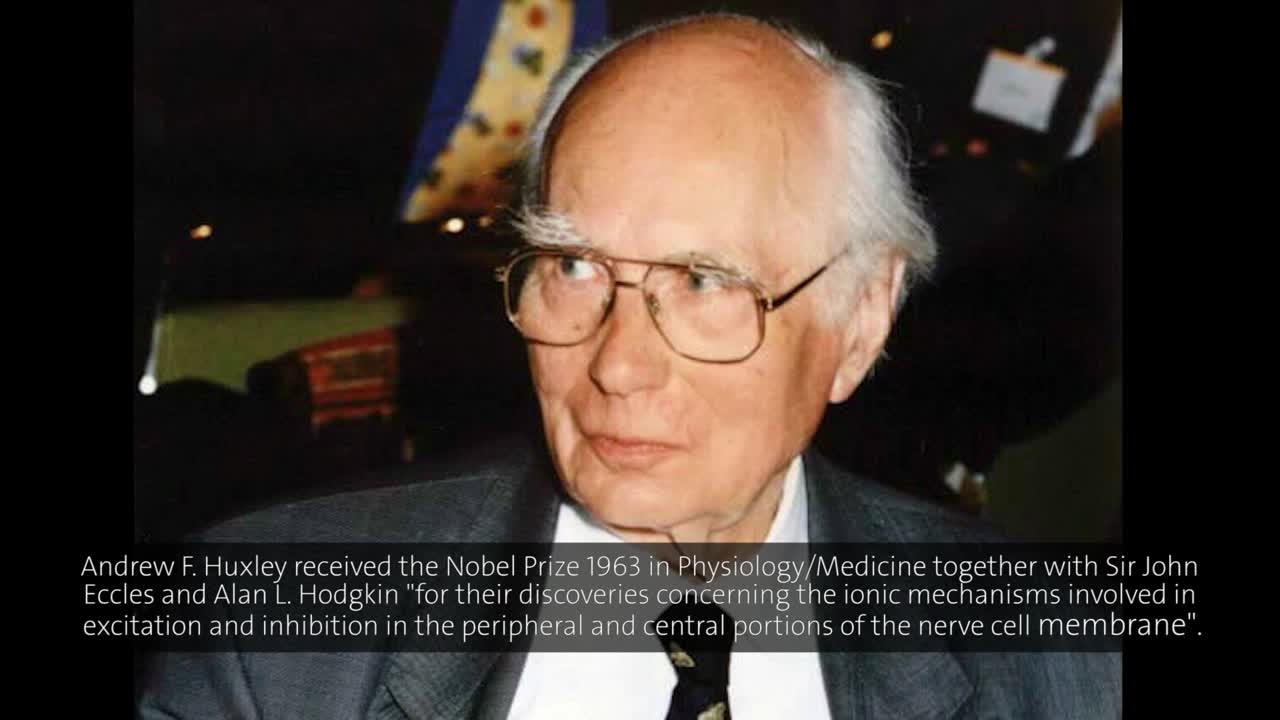 Andrew Huxley, John Eccles and Alan Hodgkin received the 1963 Nobel Prize in Physiology or Medicine "for their discoveries concerning the ionic mechanisms involved in excitation and inhibition in the peripheral and central portions of the nerve cell membrane". The experiments that paved the way to the award were completed already in 1952 by Hodgkin and his student Huxley. Briefly, it was shown that nerve impulses are generated by ions flowing in and out of nerve cells. These fluxes are controlled by changes in the nerve cell membrane. The recipients of the 1963 Nobel Prize hence established that chemical processes are crucial to nerve signal transmission and that the latter is not purely electrical, as was believed before.

In the present talk Huxley points out that after finishing his work on ionic mechanisms in 1952 he and his collaborators had arrived at a dead end: while it was now apparent that ion-channels in cell membranes must exist, there was no way of isolating or characterizing them. It took 25 years until two German scientists, Erwin Neher and Bert Sakmann, established the experimental methods to study single ion channels. They received the 1991 Nobel Prize in Physiology or Medicine for their work.

In default of methods to study ion-channels, Huxley changed his scientific focus to the mechanisms of muscular contraction. He remained active in this field until his retirement in 1997. In the present lecture, he gives a review of the history of muscular contraction research, beginning in 1807. It was in this year that Swedish scientist Jöns Jakob Berzelius observed for the first time that contracting muscles release lactic acid. Huxley goes on to tell the story of our current understanding of muscular contraction as a story of several revolutions. In doing so he puts particular emphasis on the notion that these revolutions boosted our level of understanding - but that the sudden shifts in scientific focus also entailed unfavourable losses in scientific expertise.

A first revolution after Berzelius initial observation was the discovery that lactic acid is in fact not triggering muscular contraction and that contracting muscles release phosphate. In the 1940s it was shown that this phosphate originates from ATP hydrolysis. However, according to Huxley this revolution made the scientific community focus too much on the molecular aspects of muscular contraction, neglecting the structural or physiological ones. He himself did not follow the mainstream and, together with others established the revolutionary sliding filament model of muscular contraction in 1954, which is accepted until today. It originated from microscopic rather than chemical observations.

Towards the end of his talk, Huxley suggests that the elucidation of the structures of key proteins involved in muscular contraction, myosin and actin, in the early 1990s could, again, cause an unfavourable shift of the scientific interest towards single molecule events and advises the audience to keep the structural and physiological aspects of muscular contraction in mind.

Research on muscular contraction in this century has exemplified Kuhn's proposition that progress in science is of two kinds: occasional "revolutions" when a current set of ideas is overthrown, and intervening periods when new discoveries fit into the current scheme.

The first use of the word "revolution" in connection with muscle was in the title of A.V. Hills review of 1932. The "revolution" in question was the demise of the lactic acid theory: for thirty years it had been firmly believed by all influential muscle people that producton of lactic acid brought about shortening of long protein chains by neutralising negative charges whose repulsion was keeping the chains extended. As regards the involvement of lactic acid, it was indeed a revolution: lactic acid production was relegated to the role of a back-up process. On the other hand, the idea of long protein chains that folded or coiled as a result of chemical events survived for more than twenty years. A substitute for lactic acid as the chemical involved was already at hand: the liberation of inorganic phosphate from phosphocreatine during contraction had been discovered three years earlier.

The rise of classical biochemistry at the turn of the century led to recognition that "contraction is a molecular event". This was a revolution in the sense that attention ceased to be paid to structural changes that had been well established with the light microscope in the 19th century. This change of attitude held up progress on the structural aspects of the contraction mechanism for half a century.

There were many important discoveries during the 1930's and 1940's: displacement of the dephosphorylation of phosphocreatine by that of ATP as the primary chemical event; recognition that "myosin" is an ATPase; and the separation of what had been called "myosin" into two components, actin and what is now called "myosin". I do not regard these as "revolutions" because they fitted into the prevailing idea that shortening occurs by folding of long protein chains under the influence of a chemical reaction. The sliding filament theory of 1953-4 was genuinely a revolution, however, because it made this idea obsolete.

As regards the question how a relative force between the two sets of filaments is generated, two aspects now agreed were suggested by observations made more than ten years earlier, namely the decrease of active tension when the length of a muscle fibre is increased beyond an optimum, and the relation between rate of energy liberation (heat plus work) and speed of shortening. Neither of these could be accommodated in the idea of contractile elements changing progressively from a long to a short state. They led respectively to the ideas (1) that contributions to force are generated by "active sites" uniformly distributed along each zone of overlap between thick and thin filaments and (2) that each of these acts cyclically.

Observations with the electron microscope showed that these active sites were "cross-bridges" composed of the heads of myosin molecules extending from a thick filament and attached to the thin filament; further, the orientation of these cross-bridges changed when force was generated, displacing the filaments relative to one another.

Several questions remained, none of which has yet been completely solved:

1.Does the whole cross-bridge tilt or is the attachment to the thin filament rigid and a "conformational change" happens within the myosin head? Very recent evidence suggests that both may occur.

2.Is the change of attitude a single event or does it consist of two or more steps?

4.Despite many impressive experiments measuring the effects of single myosin-actin interactions, these are still wide disagreements about (1) the numer of myosin heads that are attached at any moment during contraction, (2) the range of movement associated with the utilisation of one molecule of ATP, and (3) the amount of force generated by a single interaction between a myosin head and an actin filament.