The Theory of Games (German presentation) 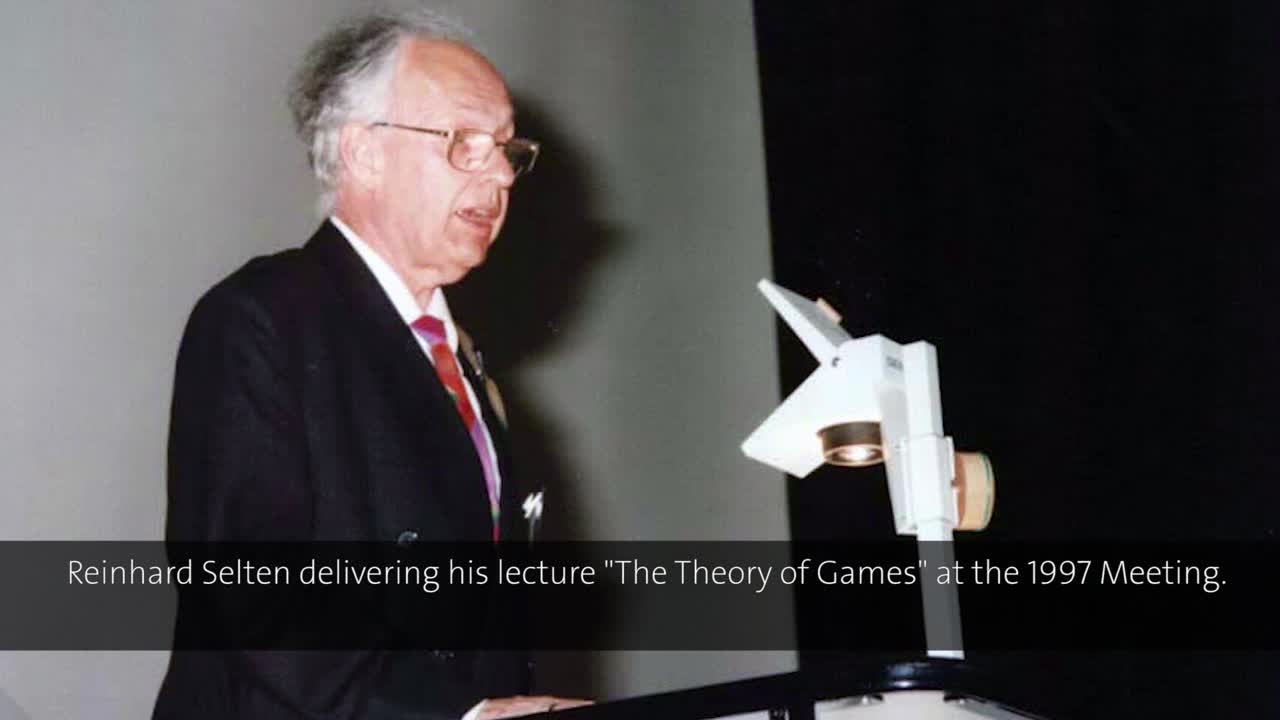 Game theorists do not teach how to play chess or poker. They rather are engaged in the mathematical modeling and analysis of purposeful interaction both in conflict and in cooperation. Thereby they strive to gain general insights into the logic of strategic interaction, and to apply them to politics, economics and biological evolution. With this clarification Reinhard Selten opens his first lecture in Lindau (in German language), three years after he shared the Prize in Economic Sciences in Memory of Alfred Nobel 1994, the first that had been explicitly dedicated to achievements in game theory, with John Nash and John Harsanyi.

The concept of equilibrium is the basis of game theory. To introduce this concept, Selten gives two extensive examples. The first concerns a so-called „quantity tripole without cost“: Three suppliers are selling the same goods. Each of them can offer any integer amount between 0 and 20. The sum of their offers is x. The price they can realize on the market is determined as 20 minus x. Thus each supplier’s pay-off will be the product of sales and price. Which strategy should a player in this game choose to yield an optimal result? This is the game-theoretical question that Selten descriptively discusses to arrive at some interesting insights. The player who earns most, for example, has not necessarily played best, explains Selten: “There are mistakes that harm others more than oneself, yet nevertheless they remain mistakes.”

The second example Selten mentions pertains to the interaction between a thief T and a guard G. T has the choice to stay either at home or to steal, G has the choice to stay either awake or to sleep. If G sleeps and T steals, T will gain the prey P and G faces his dismissal D. If G is awake, T will go to jail minus J and G realizes the value zero because he has just done his job. If T stays at home and G sleeps, the first realizes the value zero and the latter earns a good sleep, which is worth S. It is obvious that it is not so easy to find an equilibrium here as it is in the quantity tripole, but one can find it with a mixed stratagem, as Selten explains in detail. A possible application of knowledge about equilibria in games like this may lie in optimally dealing with fare dodging in public transport.

In the last third of his talk, Selten shows some theoretical and practical applications of game theory. Citing several case studies from cultural anthropology and biology he highlights the handicap principle, which had originally been proposed by biologist Amotz Zahavei. This principle explains how certain signaling behaviors between humans or between animals have emerged over time as an important part of evolution. Why do male peacocks for example carry such a gorgeous tail? It makes them more vulnerable to predators and may be a handicap. Yet with its tail the peacock does not only demonstrate that he has survived in spite of this handicap but also signals “a certain immunity against currently prevailing infectious diseases” and thereby attracts peahens.

A practical application, in which game theory has proven to be tremendously successful, is the design of auctions for the sale of major public assets. Selten describes the auction for narrow band personal communication services for beepers in the US in July 1994. It was originally estimated to generate $ 50 million, yet thanks to the advise of game theorists it generated $ 617 million. “These were relatively cheap frequencies”, says Selten. “Subsequent auctions for more expensive ones generated $ 8.7 billion”. The design of such auctions, however, is impossible by theoretical considerations and calculations alone: “It is absolutely necessary to complement theoretical analysis by experimental research.”