The Oxygen We Breathe - Friend and Foe 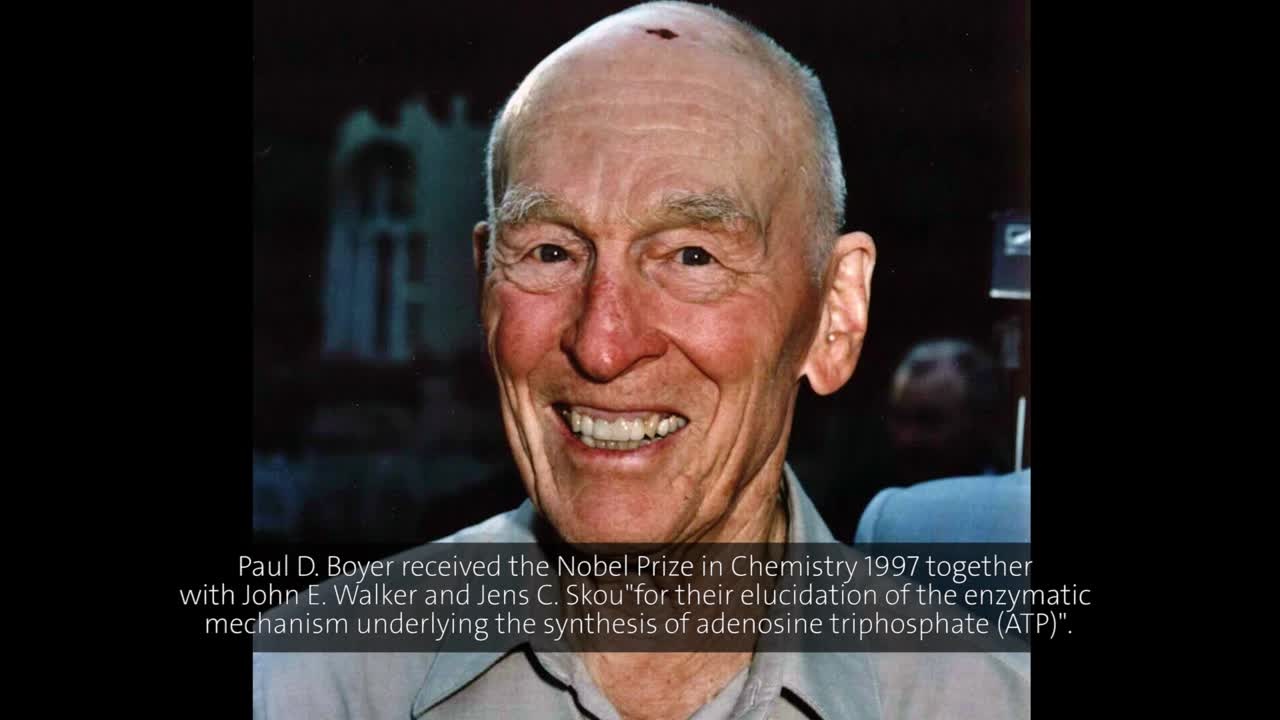 Paul Boyer received the Nobel Prize in Chemistry in 1997 quite late in his career; he was 79 years old at the time and had focused on research in enzymes for nearly fifty years. He is currently a professor emeritus of the University of California, Los Angeles, where he has worked since 1963.

The motivation for awarding the Nobel Prize was for the “elucidation of the enzymatic mechanism underlying the synthesis of adenosine triphosphate (ATP)”, and the central theme of Boyer’s lecture given in Lindau is the description of ATP and the enzyme responsible for its synthesis, ATP synthase, including an overview of experiments on ATP synthase using the oxygen isotope 18O.

ATP is an energy-carrying molecule, produced in mitochondria, or “the powerhouses of the cell” as a result of metabolic processes (photosynthesis in plants, oxidation in aerobic organisms and fermentation or anaerobic respiration in anaerobic organisms). The production of ATP is the most common chemical reaction in the world, and according to Boyer’s calculations, “an active individual will turn over a body weight of ATP a day”. The mushroom-like diagram of ATP synthase is known to anyone who has studied biochemistry in high school or university. The enzyme is embedded in the mitochondrial membrane, capturing the energy from the protons travelling through the synthase into the three catalytic sites to make the ATP compound.

Many years of research have not diminished Boyer’s profound admiration of the ATP molecule and he claims ATP to be “the best”; “DNA is a wonderful molecule but in terms of total properties I feel it takes a second seat to the protein molecule.”

Boyer also comments on the three reasons for which he believes he obtained the Nobel Prize; life – or a passion for science and the explanation of living processes; luck – his team could have worked equally hard on an enzyme that didn’t have the wonderful features of rotational catalysis; and longevity – he outlived all his competitors!

Oxygen, supplied to earth by the photosynthetic splitting of water, has a vital function in providing energy for our life processes. The oxygen we breathe is transported to our cells and diffuses into the small membrane-surrounded mitochondria inside the cell. Every living cell has many of these small mitochondria present. There the oxygen is used for what is called oxidative phosphorylation. The energy from oxidation of foods is captured to make a key substance called adenosine triphosphate or ATP. The ATP is used for many purposes, such as muscle contraction, nerve and brain function, active transport and syntheses. Energy for these processes comes from the cleavage of ATP to ADP (adenosine diphosphate) and inorganic phosphate.
But oxygen can also be a toxic substance. During the step-wise reactions catalyzed by enzymes in the mitochondria a small amount of the oxygen is converted to forms that escape from the enzymes and caused unwanted oxidation of cellular constituents. Oxidative damage to our DNA and proteins interferes with their normal function. Such damage is emerging as one of the principal causes of aging. Thus oxygen is both providing us with energy for the enjoyment of life but at the same time is decreasing the length of time that we will be around for such enjoyment.
My research career has focused on the study of enzymes, the remarkable catalysts that make possible the many chemical reactions needed for life. The research of my students and postdoctoral associates about one of these enzymes, called ATP synthase, led to the Nobel recognition. A historical perspective of the over 60 years of research since the process of oxidative phosphorylation was discovered will be presented. Little was known at that time about the remarkable structural properties of proteins. Observations about how ATP is formed by anaerobic metabolism led to the belief that in oxidative phosphorylation an intermediate would be formed from inorganic phosphate that then reacted with ADP to form ATP. Attempts to find such intermediates were unsuccessful, and little insight into the process was gained from decades of research.
An important advance was provided in the 1960's by Nobelist Peter Mitchell. He proposed that energy from oxidations is initially captured by formation of an electrochemical gradient of protons [H+] across the mitochondrial membrane in which the ATP synthase is embedded. I and others were reluctant to accept his proposal until it was recognized how the proton motive force could drive ATP synthesis. My group has made extensive use of the heavy isotope of oxygen, 18O, to probe that fate of the four oxygens of inorganic phosphate as ATP is made. Results from these and other studies let me to propose in the 1970's a binding change mechanism for how ATP is made. This is that ADP and inorganic phosphate react at a catalytic site to directly form a tightly bound ATP.