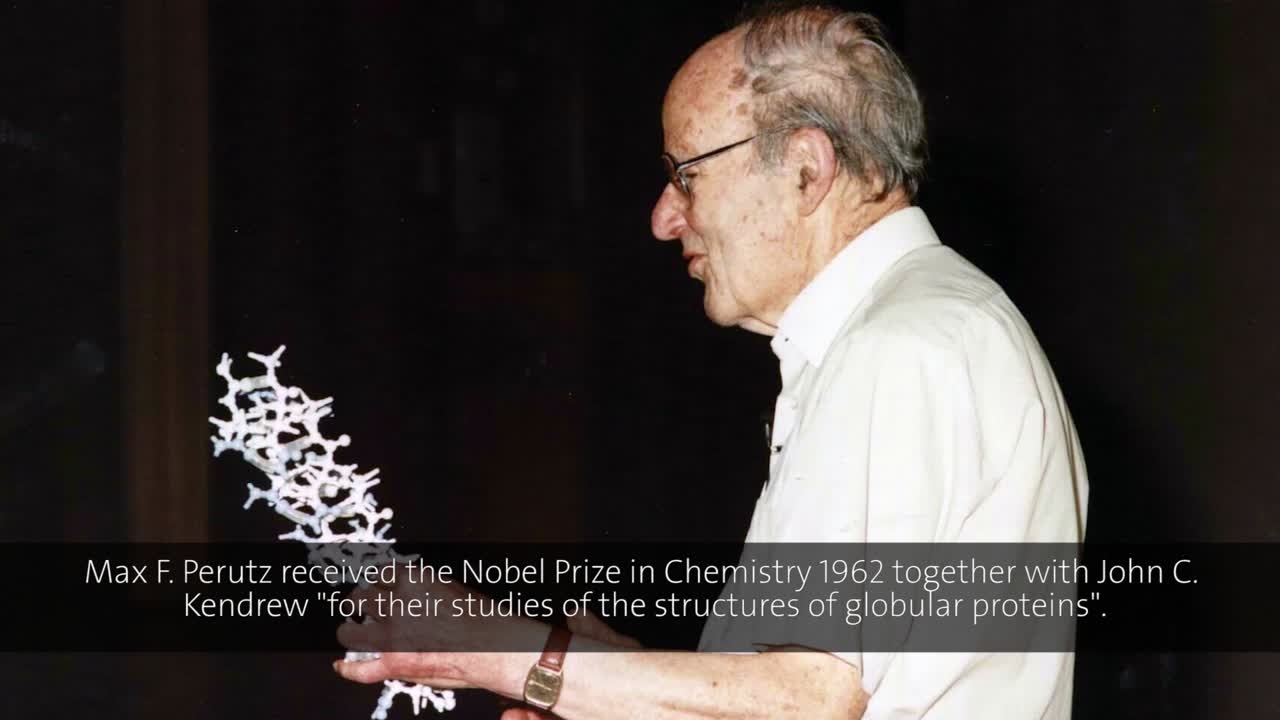 “I’m known as the hemoglobin man”, Perutz said to his audience in Lindau, and indeed much of Perutz’s research focused on hemoglobin – first the solution of its structure, then its functional analysis and finally its mutations and pathologies, such as sickle cell anemia, an inherited blood disease. Perutz received the Nobel Prize in Chemistry in 1962, along with fellow Cambridge colleague John C. Kendrew, “for their studies of the structure of globular proteins”. However, this lecture tells the story of his contribution to solving the structure and mutation of the protein responsible for Huntington’s disease, which is six times larger than hemoglobin. As Perutz noted, Huntington’s “is a terrible disease”, its symptoms becoming apparent in middle-aged bearers of the gene, leading to uncontrolled movements and seizures, and finally severe dementia and death.

Perutz built a model of this protein, known as Huntingtin, initially as a curiosity. The proposed polar zipper model consisted of two polypeptide chains, and glutamine side chains linked together with hydrogen bonds, which make the structure resemble a zipper. Once the structure was established, Perutz took another step forward in the study and experimentally determined that the polyglutamine chain is indeed a straight chain. The paper, published in 1993, suggested that the polypeptide may agglomerate in neurons, but this was difficult to prove at the time. An exciting breakthrough took place four years later, when researchers at Guy’s Hospital in London succeeded in transferring the Huntigtin gene into mice, and thin sections of the mice’s brains displayed protein precipitates in the nuclei of neurons. It was soon found that other neurodegenerative diseases are caused by extensions of glutamine repeats, which lead to aggregation, and the common thread of the diseases are the number of repeats that determine whether someone will succumb to the disease or not; 37 or fewer glutamine repeats signify a healthy person, but 40 or more repeats will manifest itself in a neurodegenerative disease. The longer the glutamine chain, the earlier the onset of the disease, and the worse the neurological symptoms.

Max Perutz died in Cambridge in 2002, but worked on unravelling the unknowns of neurodegenerative diseases almost until the end of his life. According to his obituary in Nature Structural Biology, written by Perutz’s colleague Alan Fersht, Perutz managed to delay an emergency surgery by several hours in order to finish two papers on amyloid structure, a common feature of neurodegenerative diseases. Both of these papers were published after his death.

Alzheimer’s, Parkinson’s, Huntington’s – all of these diseases still remain incurable. As Perutz concluded in his lecture, the ways and means of preventing protein aggregation is one of the great challenges the younger generation must overcome.

Huntington's chorea, formerly also referred to as St. Vitus' dance, is a severe hereditary neurodegenerative disease occurring in approximately four out of 100,000 persons. Ordinarily it does not become manifest until a person's middle years. It begins with uncontrolled movements, changing to variable moods, dementia and death. Six years ago, a group of 61 American and British researchers at eight universities discovered the gene responsible for the disease. It codes for an enormous protein of more than 3140 amino acid residues in a chain. In normal protein, this chain contains a series of up to 37 coupled glutamines. The only difference between the normal and the diseased proteins is the length of the glutamine series, which numbers fewer than 37 in healthy and more than 40 in diseased persons. The longer the glutamine series, the earlier the onset of the disease.
By coincidence I found that long series of glutamines attach to each other like zippers, and I thought that this might supply the key to the molecular mechanism of Huntington's chorea. In my lecture, I will talk about the consequences of this mechanism in this and related hereditary diseases and their associations with Alzheimer's, Parkinsonism, and diseases caused by prions.