The Role of the Thymus in Immunity 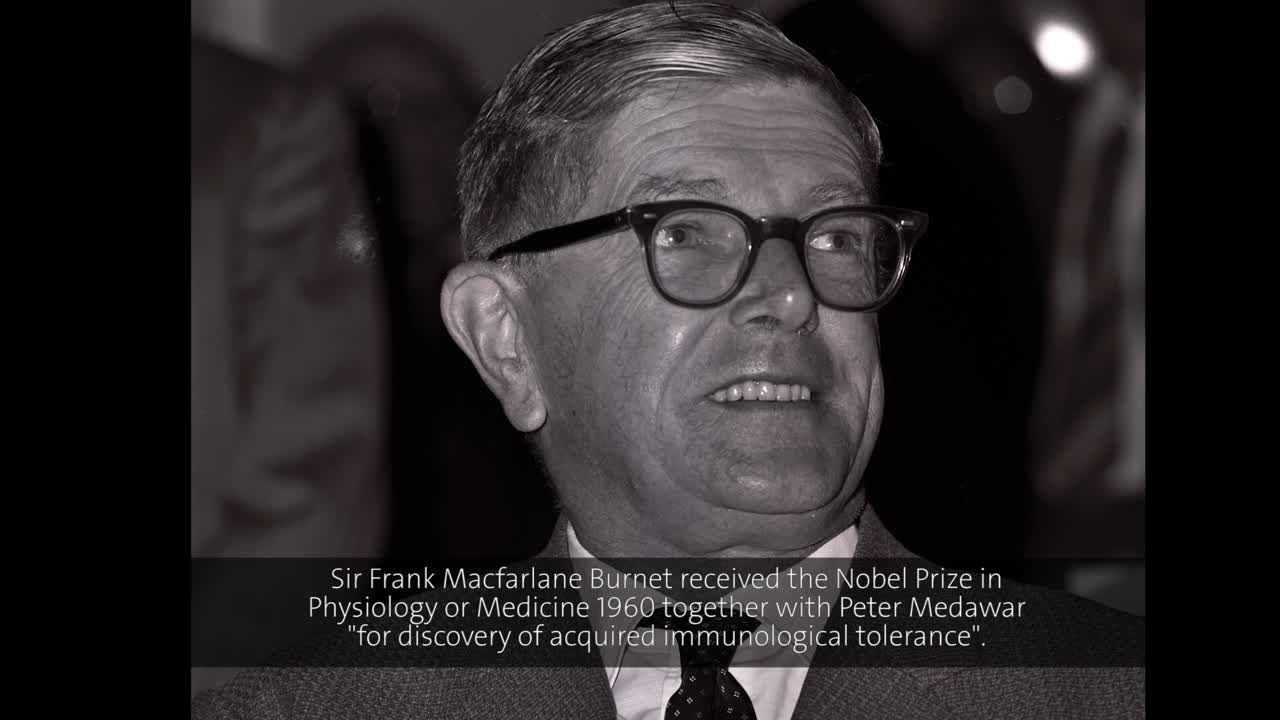 Frank Macfarlane Burnet is best known for his theory of clonal selection that ended the “snail-like progress” of immunology during the first half of the 20th century and turned it into one of “the most rapidly moving of the biomedical sciences”.[1] The Nobel Prize in Physiology or Medicine 1960, however, was awarded to him and Peter Medawar jointly “for their discovery of acquired immunological tolerance”. In his first Lindau lecture again, he chose to centre another then most cutting-edge issue of immunological research: The role of the thymus in immunity.

Today we know well that the thymus is the school of T lymphocytes, the organ, in which they learn to distinguish self from non-self in order to prevent them from attacking the body’s own cells. Yet for centuries, the thymus had been “an organ in search of a function”. Scientists had no clue why it is so large in infancy, only to shrink during adolescence to a predominantly fatty tissue in the adult. Prior to 1961 “the thymus was considered not to have any role in immunity”.[2] In that year, “the first substantial evidence” for the immunological importance of the thymus was provided by Jacques Miller, as Burnet says at the beginning of this lecture, in whose first part he gives an account of Miller’s experiments and explains them to his audience.

In mice whose thymus had been removed prior to birth, Miller had observed three important changes. They showed, as Burnet recalls, a low level of circulating lymphocytes in the blood; an ability to accept skin grafts from unrelated strain of mice; and a relative or absolute inability to produce antibodies. Miller concluded that “during embryogenesis the thymus would produce the originators of immunologically competent cells” suggesting “that lymphocytes leaving the thymus are specially selected cells”.[3] Whereas Miller’s conclusions were received with scepticism by many of his peers, Burnet obviously shared them. “It is becoming evident that the thymus in mammals is the primary source of the immunologically effective cells that are concerned with bodily defence”. In 1963, however, it was not yet known that two kinds of lymphocytes are involved in this defence, and that for B lymphocytes the bone marrow is the thymus’ equivalent.

Burnet’s lecture provides a fascinating insight into the state-of-the art of immunology in the early 1960s. In its second part, he discusses the relevance of the findings of Miller and others for the possible treatment of autoimmune diseases such as acquired haemolytic anaemia, systemic lupus erythematosus, and myasthenia gravis. “I am only mildly optimistic that the new knowledge of the thymus will have much bearing on the practice of medicine, but I believe that it is already producing a quiet revolution in immunology. Until the last decade primarily concerned with the chemistry of antigens and antibodies. Today, the concept of the immunologically competent cell has become as important as the concept of antibodies.” In this context, Burnet also outlines the essence of his clonal selection theory.

Frank Macfarlane Burnet is regarded as Australia’s most eminent biologist of the 20th century. From 1944 to 1965 he served as the director of the Walter and Eliza Hall Institute of Medical Research in Melbourne[4]. Amazingly, the focus of his scientific benchwork lay on virology. Some 90 percent of his experimental papers cover this field. His outstanding successes in the field of immunology resulted primarily from his theoretical excellence. He continuously kept pace with current debates in immunology. When he retired from the directorship of the Hall Institute in 1965, the Ciba Foundation organized a symposium on the thymus in Melbourne in his honour.[5]