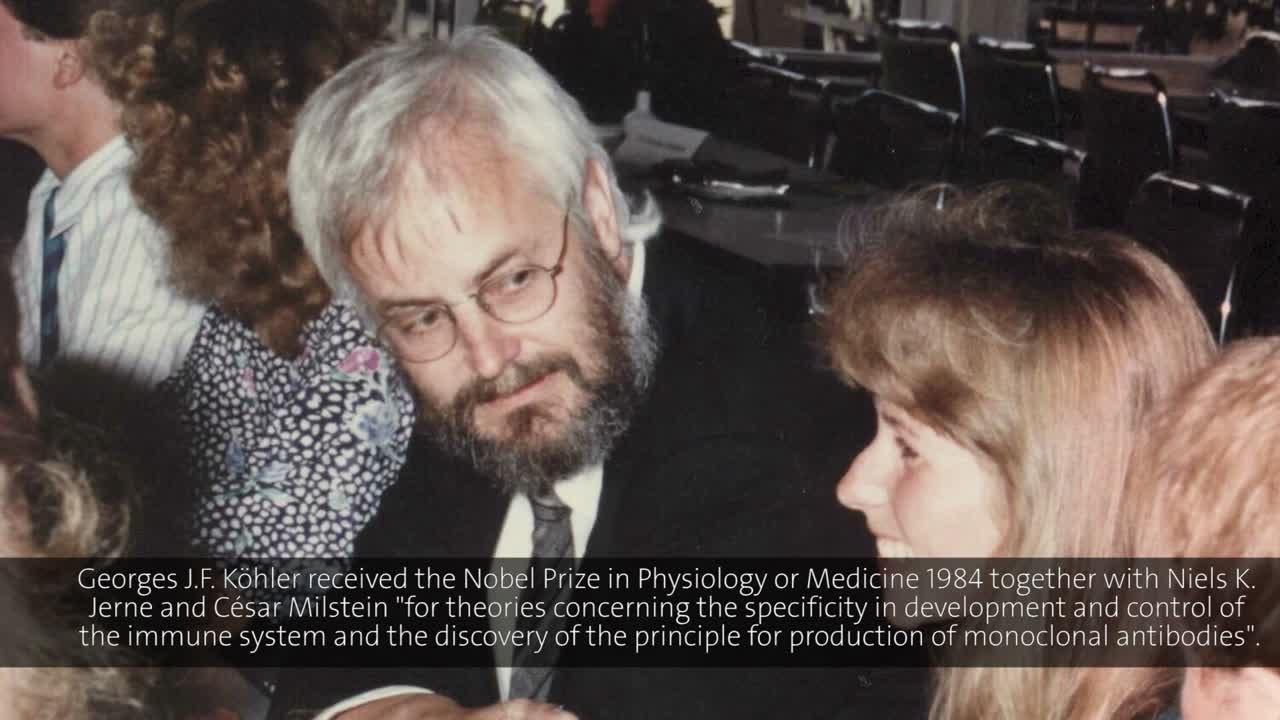 At the age of 28, Georges Köhler co-invented the technique of producing monoclonal antibodies, which would become an indispensable research tool and dramatically improve the treatment of autoimmune diseases and cancer. At the age of 38, he shared the Nobel Prize in Physiology or Medicine for this achievement, together with his mentors César Milstein and Niels Jerne, being the German Federal Republic’s youngest Nobel Laureate ever. At the age of 48, he unexpectedly died from pneumonia, survived by his wife and three children. Listening to the both contemplative and self-assured voice of Georges Köhler in this first of two lectures he gave in Lindau, reveals the dimension of the loss, which his premature death meant not only to his family and friends, but to the entire immunological community.

In 1974, as a post-doc, Köhler had joined the laboratory of the renowned immunologist César Milstein in Cambridge. His idea was to fuse a mutant cell line of mouse myeloma (a cancer of plasma cells) with mouse spleen cells that had been immunized with erythrocytes from sheep, and to incubate them in a specific medium, in which only fused cells could survive. Thereby he intended to create a hybridoma with the immortality of a tumour cell and the specific ability to produce antibodies against sheep erythrocytes. Both he and Milstein were sceptic about the prospects of success but decided to give it a try. Around Christmas of that year, Köhler’s first experiment was ready to be scrutinized. Halos had to emerge around the wells of the fused cells if they were producing antibodies. Köhler asked his wife Claudia to accompany him to see what had happened. "We went down into the basement of the institute, which has no windows," he remembered years later. "I looked at the first two plates. I saw these halos. That was fantastic. I shouted. I kissed my wife, I was all happy. It was the best result I could think of."[1]

The importance of this discovery was initially overlooked by the community. When it gradually became apparent, Milstein was first given the sole credit for it and received prestigious awards such as the Sloan prize. Köhler did not grudge his mentor this recognition. In a memorandum written in 1981, however, he gently and gratefully reminded of his role in the invention of monoclonal antibodies: "I believe I was the driving force in it, but it is also true to say that I would not have thought about this problem in any other laboratory than César Milstein's and I wouldn't have been encouraged to do the experiment by anyone else but César Milstein.”[2]

In this lecture, Köhler does not talk about his breakthrough. “I’m not going to explain how monoclonal antibodies are produced. It’s a technique, which is now well-known, and the story is, for me, over”, he says and continues – in German language as then requested by the organizers of the Lindau Nobel Laureate Meeting – to elaborate on the general importance of transgenic mice for immunological research. After a short introduction into immune biology, he explains how to produce and breed transgenic mice, and subsequently describes several applications and respective current research results.

Georges Köhler’s invention had a revolutionary impact on medicine. Yet he had not much interest in its commercial exploitation. He was primarily driven by scientific curiosity. “I consider it more important to know things than to apply them”, he emphasizes at the end of this lecture. What an amazing statement for a man whose ingenuity has triggered within forty years after his invention the development of a still growing annual global market for monoclonal antibodies of annually 75 billion US-Dollars[3].