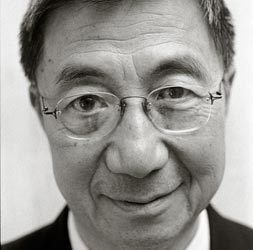 Nobel Prize in Physics 1976 together with Burton Richter
"for their pioneering work in the discovery of a heavy elementary particle of a new kind".

Samuel Chao-Chung Ting was born in Ann Arbor, MI on January 27, 1936, to a Chinese academic family while his parents were visiting the United States. His father, Kuan-hai Ting, was professor of engineering, and his mother, Tsun-Ying Wang, was a professor of psychology. After having spent his youth in China, Samuel Ting returned to the United States in 1956. He studied engineering, mathematics and physics at the University of Michigan in Ann Arbor, where he earned a bachelor’s degree in 1959 in both mathematics and physics, and obtained a M.sc. degree in physics the following year. Later that year, Ting won a predoctoral fellowship funded by the Atomic Energy Commission for pursuing his PhD studies at the University of Michigan. Ting began working on particle physics accelerators under the supervision of L. W. Jones and M. L. Perl. Ting, Jones, and Perl made research at the proton synchrotron of the Lawrence Berkeley National Laboratory—called the Bevatron—to explore the properties of pion-proton elastic scattering at energies between 3 and 5 GeV. Working on this experiment, Ting became an expert on particle detection techniques. Jones, Perl, and Ting employed an array of recently developed thin-plate spark chambers to measure the elastic differential cross sections. In order to distinguish between kaons and pions, they also used threshold Cerenkov counters to measure the velocity of the reaction products. Ting completed his PhD in physics in 1962 having acquired a deep knowledge of the most novel techniques employed in high-energy physics accelerators and a clear understanding of the relevant theoretical problems in particle physics.

Experiments on Lepton Pairs
After earning his PhD, Ting spent two years at CERN (Geneva) as Ford Foundation Fellow. He worked with G. Cocconi at the CERN proton synchrotron, performing experiments on proton-proton collisions. In 1965, Ting was appointed assistant professor at Columbia University and returned to the United States. His next experimental endeavour was a repetition of an experiment performed by R. B. Blumenthal and co-workers at the Cambridge Electron Accelerator (CEA) in 1965. The CEA experiment was considered as a test of quantum electrodynamics (QED) in the range of high energies and small distances. After having measured the cross section for the production of symmetrical electron-positron pairs due to gamma rays, the experimenters claimed that their results did not agree with the prediction of QED. The conclusion that QED broke down at high energies jeopardized the view shared by many theoretical physicists that the successful QED was a possible model on which to build field theories of weak and strong interactions.
In 1965, Ting began making plans to repeat this kind of experiment at the German electron synchrotron called DESY, operating near Hamburg, which at that time reached a maximum energy of about 7 GeV. The following year the Columbia-DESY team published the result of their experiment confirming the validity of QED for reactions of the type: γ + anything = e+ + e- + anything. They could show that the observed apparent violation QED at energies around 750 MeV was due to the contribution of the strong interactions to the e+e- yield. The increase of the e+e- yield was ascribed to the production of the ρ vector meson—a massive photon-like particle that decays into electron-positron pairs.
Thanks to this experiment, Ting gained expertise in the experimental practices dealing with the production and detection of lepton pairs. As he summarised in his autobiographical sketch, he continued to employ similar experimental techniques to address different aims, including “quantum electrodynamics, production and decay of photon-like particles, and searching for new particles which decay to electron or muon pairs.” All these researches were characterized by the need for high-intensity high-energy particle sources and high mass resolution detectors.

The Discovery of the J Particle and the November Revolution
The following experiments Ting conducted at DESY focused on elucidating the properties of those massive particles that could decay into electron-positron pairs. In the early 1970s, Ting suggested that the same methodology could be employed for the detection of massive photon-like particles yet undetected. To pursue this aim, however, Ting recognized that more powerful accelerators were necessary. Thus, in 1972, he submitted a proposal to the 33 GeV Alternating Gradient Synchrotron (AGS) at the Brookhaven National Laboratories (BNL)—one of the World’s premiere particle accelerators since it began operating in 1960. The experimental procedure of Ting’s planned experiment was very similar to a previous experiment performed by Leon M. Lederman and his group at the AGS in 1966. The Lederman team had measured the cross section of muon pair production, observing that there was an unexpected curve around 3,5 GeV—often called “Lederman’s shoulder.” Because of the insufficient mass resolution of his apparatus, Lederman was unable to demonstrate that the observed deviation from a smooth decrease of the muon-pair yield indicated the existence of a new massive photon-like particle. Ting’s group focused instead on the detection of electron-positron pairs, on which they had acquired a high level of expertise. Because of the better mass resolution of their apparatus, the MIT group led by Ting was able to establish a clear separation of e+e- pairs from the hadronic background (see fig. 1). They were confident that the great number of observed lepton pairs with total energy around 3.1 GeV meant that they had discovered a new massive vector meson with a particularly long lifetime, which they christened J. 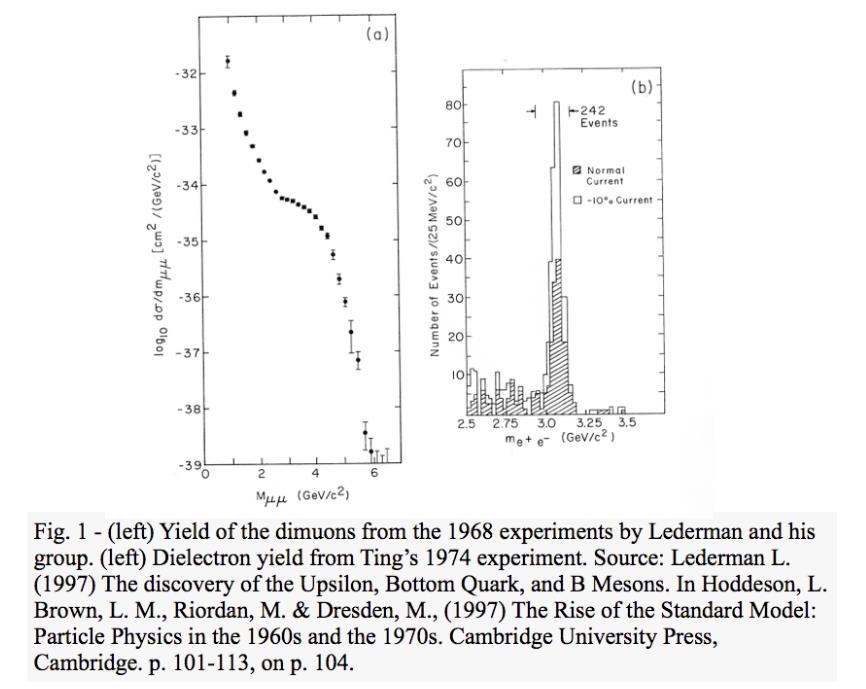 The discovery received an immediate confirmation by an independent and simultaneous experiment performed at the Stanford Linear Accelerator Center (SLAC). The SLAC team headed by Burton Richter had been collecting data on electron-positron annihilations with the recently built electron-positron collider called SPEAR. These data seemed to show the existence of a neutral particle with mass around 3.1 GeV, which they baptised Psi. As soon as the two groups compared their data, the experimenters recognized that they had actually discovered the same massive photon-like particle, which has been known as the J/Psi particle ever since. The two research groups decided to make public their discovery simultaneously by submitting their papers to Physical Review Letters on the same day: November 11, 1974.
The discovery of the J/Psi particle was fundamental for the evolution of particle physics and the acceptance of what we now call the Standard Model of particle physics, which includes the Glashow-Weinberg-Salam unified electro-weak theory and the quark-gluon gauge theory of strong interactions called quantum chromodynamics (QCD).
The paper of Ting and co-workers reporting the empirical discovery did not make any inference about the meaning of the new particle. But many theoretical physicists soon did. The results of the deep inelastic scattering experiments at SLAC in 1969 and various fundamental theoretical developments—including the proof that non-massive gauge theories can have the property of asymptotic freedom by Gross and Wilczek in 1973—had convinced many theoretical physicists that hadrons were made of fractionally charged particles that participate in the strong and weak interactions. These particles had been already hypothesised in 1964 by George Zweig and, independently, by Murray Gell-Mann, who had christened them quarks. Until the early 1970s, however, the ontological status of the quarks was very controversial, since no fractionally charged particles had ever been detected. Theorists had to assume that quarks were permanently confined into larger particles whose charge is an integer multiple of the electron charge—a property called quark confinement.
Another issue concerned the number of quarks. Until 1970, theoretical schemes were usually based on the hypothesis that there were three flavours of quarks: up, down, and strange. The three quarks were considered the elementary constituents of all the hadrons since then observed. However, the Glashow-Weinberg-Salam gauge theory of electroweak interaction—successful in describing the interactions of leptons—presented some difficulties when it was applied to quarks. In 1970, Glashow, Iliopoulos and Maiani, put forward a mechanism for weak interactions based on the existence of a fourth quark called charm. The GIM mechanism successfully explained the absence of flavour-changing neutral currents and was considered satisfactory from a theoretical perspective, but there was no empirical evidence of hadrons that had the hypothesised fourth quark among its constituents.

After the discovery of the J/Psi particle, another particle with similar properties and slightly larger mass was detected. Immediately, theoretical physicists began speculating about the nature of these particles. By July1976 consensus grew that the J/Psi particle was the simplest bound state of the charm quark and its antiparticle. A group of theoretical physicists working at Harvard developed the charmonium model to explain the properties of the J/Psi particle in analogy with the so-called positronium—the bound state of an electron-positron pair. The charmonium model explained satisfactorily the long lifetimes and the decay properties of the observed particles and allowed to calculate the properties of other bound states of the charm and its anti-particle with different spins and parities. Various experimental group detected particles with masses and properties considered as consistent with those calculated starting from the charmonium model between 1975 and 1976, providing further evidence for the validity of the theoretical model. Once most physicists accepted the charm interpretation of the J/Psi particle, the experiment ideated by Ting and the simultaneous one at the SPEAR electron-positron collider were recognised as a fundamental step in the demonstration of the existence of quarks, and, at the same time, of the validity of the GIM mechanism in the electroweak interactions. In other words, the discovery of the J/Psi particle provided empirical evidence for both the Glashow-Weinberg-Salam unified theory of electroweak interaction—supplemented by the GIM mechanism—and the gauge field theory of quarks and gluons—the bosons that mediate the strong interactions. In December 1976, two years after the first announcement of their result, both Ting and Richter were awarded the Nobel Prize “for their pioneering work in the discovery of a heavy elementary particle of a new kind.” To emphasize the importance of this empirical finding, scholars gave the name of “November Revolution” to the discovery of the J/Psi particle and the subsequent events that led to its interpretation as a bound state of a charm quark and an anti-charm quark.

Experiments in the Outer Space
After the momentous discovery of the charmonium, Ting continued to investigate the properties of the interactions described by the Standard Model of particle physics. He mainly worked at DESY and CERN, where he led large international groups of experimenters. The most important of these research endeavours was perhaps the observation of the three-jet events at the German electron-positron collider PETRA at DESY, which reached center-of-mass energies around 40 GeV. This experiment was consistent with a prediction made in 1975 by J. Ellis, M. Gaillard, and G. Ross. Working in the framework of perturbative QCD, they proposed that the e+e- annihilation could produce three jets of hadrons, instead of the two jets calculated on the basis of previous theoretical models. The PETRA experiment result was considered very encouraging because it confirmed one of the predictions of QCD, and it helped to strengthen the consensus around the gauge theory of quarks and gluons. Since the third jet was related to the emission of a hard gluon after the annihilation of an energetic electron-positron pair, the experiment is often considered as the empirical discovery of the gluon.
Ting was very discomforted by the dismissal of the Superconducting Super Collider project, which was planned to become the World’s largest particle accelerator. In 1995, a few months after the US Congress cancelled the project, Ting reacted proposing a particle physics experiment for detecting cosmic rays in outer space, which was rapidly accepted.
Since then, Ting has been serving as the principal investigator of the experiment Alpha Magnetic Spectrometer, which involves about 500 investigators from 15 nations. After a prototype, called AMS-01, was tested on a Space Shuttle mission in 1998, operations began to construct the full research system to be installed on the International Space Station. The detector—called AMS-02—was mounted on the Space Station on May 2011 to provide information about the presence of antimatter in cosmic rays as well as about the origin of dark matter, and has been collecting billions of cosmic ray events ever since.