The Agencies Method and Cooperative Games 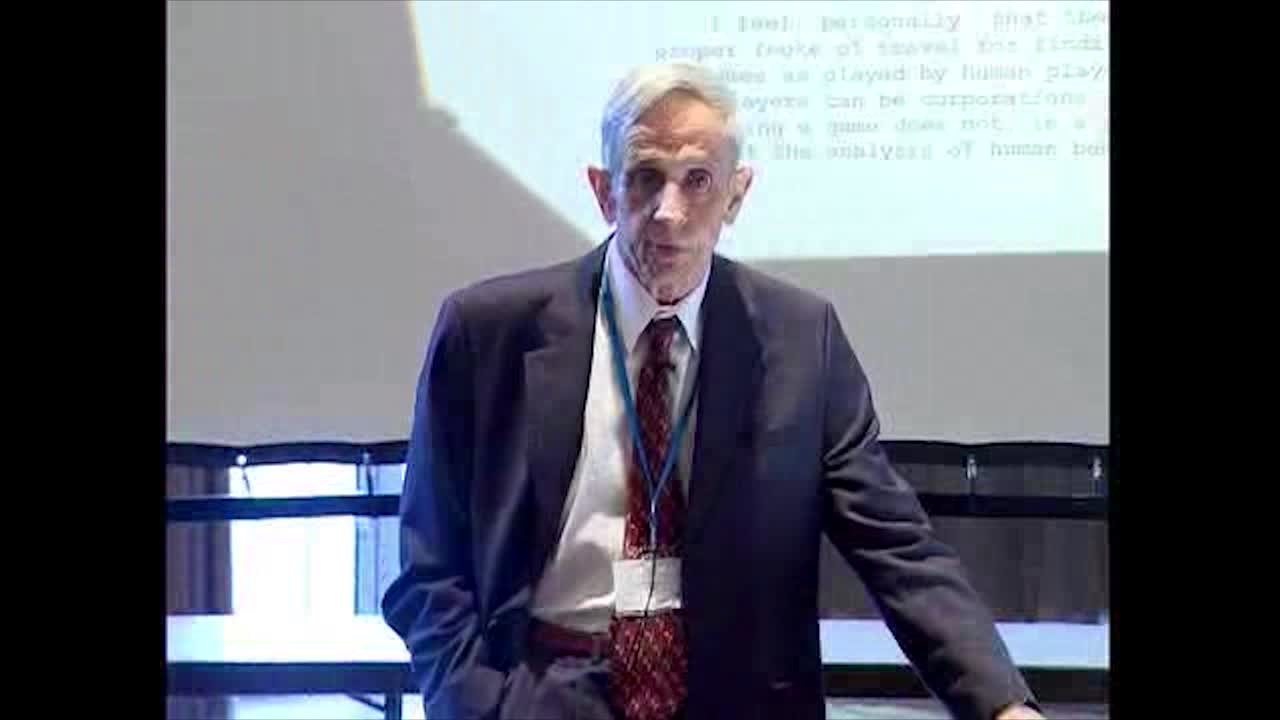 Almost 58 years before this first lecture he gave at a Lindau Meeting on Economic Sciences, in September 1948, John Nash had arrived in Princeton as a twenty-year old student. He came from the Carnegie Institute of Technology in Pittsburgh where he „had learned and progressed so much in mathematics that they gave me an M. S. in addition to my B. S. when I graduated“.[1] The letter of recommendation from Richard Duffin, his teacher at Carnegie, contained just one sentence: „This main is a genius“.[2] Nash’s career in Princeton very soon proved Duffin’s assessment. Within roughly one year after his arrival, he had worked out a thesis on „Non-cooperative Games“ whose main results were submitted to the Proceedings of the National Academy of Sciences in November 1949. These main results were the distinction between cooperative and non-cooperative games; and the mathematical proof that for each finite non-cooperative game at least one solution can be found, an equilibrium, in which each player chooses his best response to what the other does. This „Nash equilibrium“ has become the game theoretic solution concept that is most frequently applied in economics. It were primarily these main results of his thesis for which Nash received a Nobel Memorial Prize 1994.

In this lecture, Nash focuses on an ambivalent and practically very important aspect of evolutionary and strategic interaction, namely the „paradoxical possibility of the natural evolution of cooperative behavior when the interacting organisms or species are presumed only to be endowed with self-interested motivations, thus motivations of a non-cooperative type“.[3] When he later published the considerations, which he shared with his audience in Lindau, he referred to the famous prisoner’s dilemma and described his motivation to study this paradox as follows: „The idea leading to this study originated some time ago when I talked at a gathering of high school graduates at a summer science camp. I spoke about the theme of „the evolution of cooperation“ (in Nature) and about how that topic was amenable to studies involving Game Theory (which, more frequently has been used in economics). After that event I was stimulated to think of the possibility of modeling cooperation in games through actions of acceptance in which one player could simply accept the „agency“ of another player or of an existing coalition of players. The action of acceptance would have the form of being entirely cooperative, as if „altruistic“, and not at all competitive, but there was also the idea that the game would be studied under circumstances of repetition and that every player would have the possibility of reacting in a non-cooperative fashion to any undesirable pattern of behavior of any another player. Thus the game studied would be analogous to the repeated games of ‚Prisoner’s Dilemma’ variety that have been studied in theoretical biology.“[4]

It must have been moving for the audience in Lindau to listen to Nash’s talk. They could tell from his face how deeply life had left its mark on him. Ten years after his brilliant thesis, Nash had fallen prey to schizophrenia, from which he suffered until the early 1990s. The story of his life, although not in a literal representation, was depicted in the movie “A beautiful mind”, which won four Academy Awards for 2001, and has made Nash one of the most popular scientists of his time.

My work in this area really goes back, in inspiration, to 1996, when I thought of the basic idea. And since then I have been involved in concretely developing and testing this method (or approach) through computations relating to mathematical models of games of at first two and then three players. With this method or approach the realization of cooperation for the players is enabled through the election of “agencies”. And that makes the actual process of cooperation (of the players) a process that is achieved by means of actions of non-cooperative form, taken by the individual players. The general framework of our modeling has cooperation as a stable phenomenon in a repeated game. Thus cooperation is as if “evolved” and this is directly analogous to the studies by theoretical biologists of the conditions favorable for the evolutionary stability of cooperation when two sides are playing what would be, without the repetitions, simply a “Prisoners’ Dilemma” game.

The effective coalition of P1 and P2 can be realized (in our first studied modeling variant ) either by the election by P1 of P2 as an authorized agent enabled to play representing the interests of both of P1 and P2 (or by the dual alternative possibility where P2 elects P1). We carried out extensive computations of the results of cooperation as they worked out in this first modeling and we can present the curves describing the payoffs predicted as functions of a parameter describing a coalition strength. And we also view these curves in comparison with the analogous predictions deriving from the Shapley value or the nucleolus. Now we are moving into the study, by computations, of an alternative scheme in which cooperation is achieved through agencies. This involves the introduction of “attorney-agents” that are of a quite robotic nature (as far as the motivat-ions of these robot agents are concerned).

It had initially seemed, in 1996, that allowing there to be attorney-agents would greatly increase the complexity of the non-cooperative game context for which we would be computationally solving for equilibria. However we have discovered, more recently, that instead of that there can actually be a compar-ative reduction in the number of strategic dimensions. (This relates to the fact that if the players themselves function as the elected agents that there are 4 DIFFERENT WAYS by which P1 can become elected to be the final agent (and be able to act for all of P1, P2, and P3). And it seems that P1 should naturally behave slightly differently in each case. So that multiplicity had the effect that P1 was controlling 8 different strategic numbers describing how P1 would allocate the utility resources (of the grand coalition) whenever P1 would become the “final agent”. We believe also that the “method of agencies” has a naturally non-arbitrary approach to the challenging problem of finding a theory for cooperative games which will have valuable predictive and normative functions.