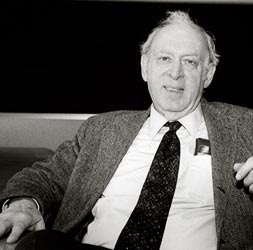 Jerome Isaac Friedman shared the 1990 physics prize with fellow American Henry Kendall (1926–99) and Richard Taylor (Canada/USA) for proving the existence of quarks, which are among the basic building blocks of matter. To be precise, they were rewarded “for their pioneering investigations concerning deep inelastic scattering of electrons on protons and bound neutrons, which have been of essential importance for the development of the quark model in particle physics”.

From the start of the 20th century, researchers studied the inner structure of atoms. The three laureates – Friedman and Kendall from MIT and Taylor of Stanford University – were key members of a team that found clear signs of an inner structure in the protons and neutrons of the atomic nucleus. The concept of quarks was introduced in the early 1960s but it took a further decade for researchers to detect traces of quarks in what is known as the SLAC-MIT experiment. The discovery was made when protons and neutrons were illuminated with beams from the two-mile- long Stanford Linear Accelerator at Stanford University in California. A beam of electrons was led through a target of liquid hydrogen or deuterium. The scattered electrons were recorded using two large magnetic spectrometers. The observations of the inner structure were interpreted to mean that quarks form protons and neutrons and are bound together by gluons. More than 99 % of all matter consists of quarks and gluons. What little remains is electrons.

Friedman was born in Chicago in 1930, the second child of Russian immigrants. He was a promising artist but developed a strong interest in physics after reading Einstein’s book on Relativity, and applied to the University of Chicago. He gained a scholarship to enter the Physics Department in 1950 under Enrico Fermi (who died in 1954), receiving an MSc in 1953 and PhD in 1956. Friedman stayed on for post-doctoral work under Valentine Telegdi and was one of the first to observe parity violation in muon decay. In 1957, Friedman joined the High Energy Physics Laboratory at Stanford University, where he studied electron scattering. He also met Kendall and Taylor, along with other future members of the SLAC-MIT team.

In 1960, Friedman joined the faculty at MIT, where he was joined by Kendall in 1961. In 1963, they began their collaboration with SLAC and Caltech that led to the SLAC-MIT experiments between 1967–75. The MIT team later worked with Fermilab, building a large neutrino detector that eventually confirmed certain predictions of the Standard Model. In 1980, Friedman became director of the Laboratory for Nuclear Science at MIT and then head of the physics department from 1983–88. He is married to Tania Letetsky-Baranovsky and they have four children. 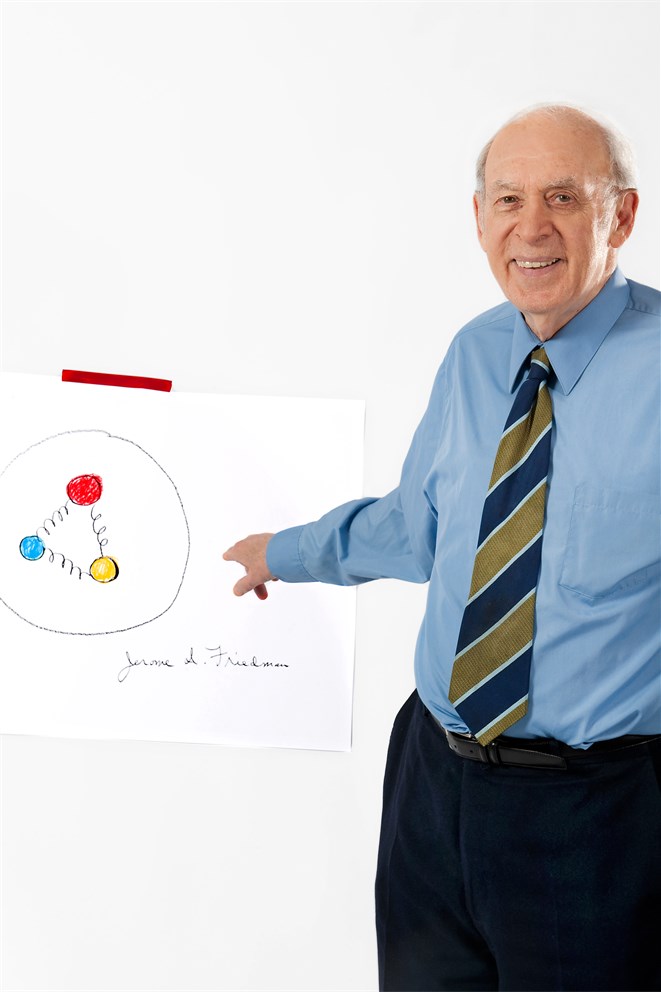 Jerome Friedman draws a proton with three quarks neatly nestled
within it. But he does not want to hold his artwork for the camera.
Instead, he simply tapes his sketch to my immaculate background.
Where does that red tape come from? I have no clue.

A Portrait of Particles
by Adam Smith

“I enjoy art very much and as a young person thought I would become a painter,” says Jerome Freidman, reflecting on his simple but striking depiction of three quarks within a proton. “That was my ambition when I was in high school,” he continues. “Then, as a result of reading a book that was written by Einstein about relativity I got so engrossed in the questions of the physical world that I decided to go to university and I ended up studying physics. So that’s what happened to my art career!”

His physics career saw him teaming up with Richard Taylor and Henry Kendal to perform experiments investigating what happens when high energy electrons crash into protons or neutrons, and then scatter. To their surprise, these studies revealed, for the first time, the presence of the quarks that form the building blocks from which protons and neutrons are made.

The quarks in Friedman’s drawing are connected by wavy lines, representing the force field, the so-called ‘strong force’, that binds the quarks together. The billiard ball-like quarks have different colours because each one has a different charge, not an electric charge such as possessed by electrons and protons, but a charge associated with that strong force shown between them. Friedman’s choice of this particular triad of colours (red, yellow and blue) is not random; combine them and they cancel out, just as the fractional charges of quarks always cancel out inside the proton or neutron, leaving it with no overall strong charge when viewed from a distance.

“I am the sort of a person who has a visual approach to everything,” says Friedman. “When I think of physics I think of visual aspects of it and I see images. I don’t think in equations, I think in images. I think my art experience was very important in developing that facility. When I think of scattering electrons and quarks, I see the picture in my mind of electrons scattering from quarks. Although, as you probably know, the quantum picture makes this very complicated because they [the quarks] are neither particles nor waves but some sort of strange combination of the two, nevertheless I think in pictures as I develop models of what is happening in physics.”