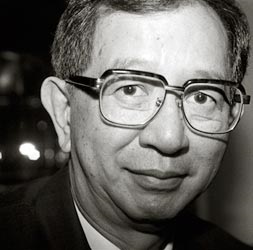 Yuan Tseh Lee was the first Taiwanese-born Nobel laureate, receiving the chemistry award for his work on crossed molecular beams, enabling the study of elementary molecular reactions. Scientists have attempted the study of chemical kinetics in solution since the 19th century. Lee’s breakthrough was to use information derived from angular and velocity measurements of elementary reactions in vacuum to understand the dynamics of chemical reactions.

Lee was born in Hsinchu, Taiwan, in 1936, when the island was still under Japanese occupation from a war against China in 1894. At school he was a keen sportsman and played in a brass band, but he was also a budding scientist, having been inspired by the story of Marie Curie. He studied chemistry at the National Taiwan University, graduating in 1959, and going on to the National Tsinghua University to gain his Master’s degree. He stayed on at Tsinghua until 1962, when he entered the University of California at Berkeley, where he developed an interest in molecular scatter-ing, especially crossed molecular beam (CMB) studies.

After gaining his PhD in 1965, he stayed on at UCB to work in the group of Bruce Mahan with Ron Gentry and designed and built a powerful scattering apparatus. In 1967, he moved to Harvard to work in the group of Dudley Herschbach. There he built a universal CMB apparatus with Doug McDonald, Pierre LeBreton and George Pisiello, carrying out the first successful non-alkali neutral beam experiment later that year. A year later he joined the University of Chicago, and in 1974 returned to Berkeley as professor of chemistry and principal investigator at the Lawrence Berkeley Laboratory. He became an American citizen the same year.

Since receiving the Nobel Prize, Lee’s research group at Berkeley has expanded into other fields of molecular chemistry. Lee has served on several boards up to national level, including the Secretary of Energy Advisory Board and the Welch Foundation Science Advisory Board. In 1994, Lee returned to Taiwan, to serve as president of Academia Sinica, the most prominent research institution in Taiwan. Lee has been active in promoting scientific and cultural developments in Taiwan, and educational reform. He has established several new academic and research facilities, helped establish the Foundation for the Development of Outstanding Scholars, and even advised Taiwan’s President Chen Shui-bian. For a period of three years Lee was named Taiwan’s representative in the APEC leaders’ summit and is said to have been offered high political office which he did not accept. Lee retired as president of Academia Sinica in October 2006. From 2011 to 2014 he served as President of the International Council for Science (ICSU). Apart from the Nobel Prize (shared with John Polanyi and Dudley Herschbach), Lee has received 34 honorary doctorates, as well as several international awards. Lee and his wife, Bernice Wu, whom he met in elementary school, have three children. 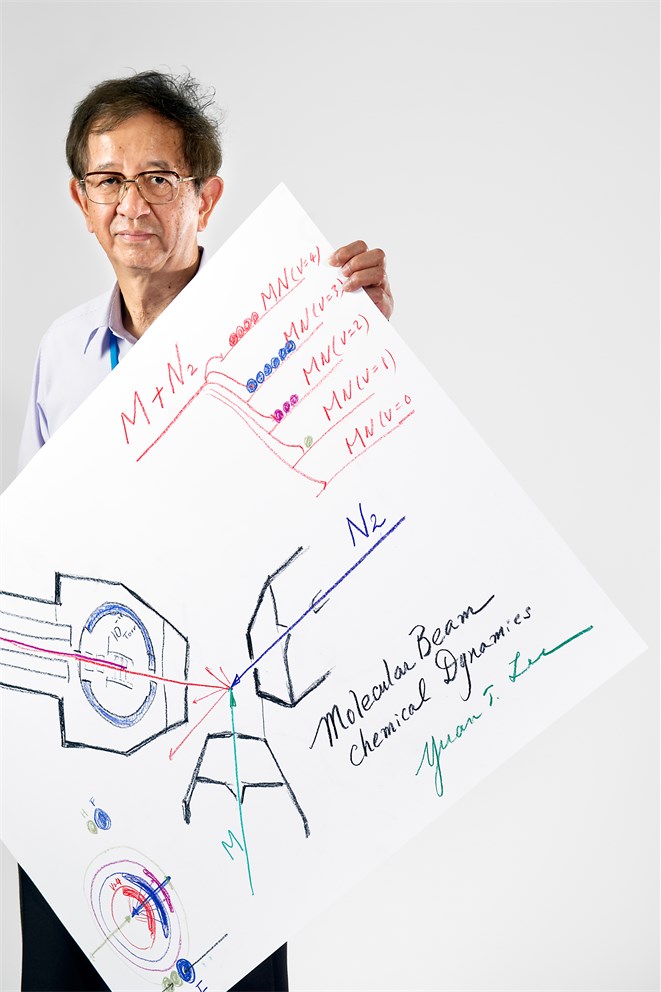 Yuan Tseh Lee appears to be your stereotypical scientist when he enters the studio. Softspoken,
quiet, spectacles. He said in an interview that he used to blush when he saw a
lady in the street! His drawing tells a different story: Precise, confident strokes, strong
colours and a clarity that makes even a photographer understand why his
Nobel-technique is called “crossed molecular beams”.
In his home-country, Taiwan, he is also known for his political skills. He helped swing a
presidential election at the last moment and was offered the job of prime minister!

That apparatus, consisting of two beam sources and a detector, takes up most of Lee’s drawing. At the bottom, two molecular beams (green and purple) collide to produce the products shown in red. Extending towards the upper left is the moveable detector, capable of measuring velocities and angles. This is an ultrahigh vacuum system that ionizes the molecules entering it, counting the particles one by one and analysing their mass.

As the beams collide, a chemical reaction takes place, and the apparatus is designed to detect where this chemical energy goes. It may be released as vibrational, translational or rotational energy, and on the upper right-hand side, Lee has shown a possible energy distribution resulting from the reaction of “M + N2”, which could, for instance, be the reaction between one atom and a molecule. The chemical energy will be released in different forms. Sometimes the resulting molecule could be very hot, and moving slowly, or sometimes it could be cold, but moving very fast. The bottom right-hand corner illustrates the fuller chemical dynamic profile of such a reaction, the reaction of a single fluorine atom with a hydrogen molecule.

“My father is a painter, artist,” says Lee. “Well, when I tried to become a painter my father always said, “Become a medical doctor, as an artist it’s hard to feed the family.” Actually this artistic background or training turned out to be very useful in science. I designed very complicated machines. Later we found out that in terms of imagination and creativity, artists and scientists … make no difference. They all try to be creative and try to be imaginative in their work.”