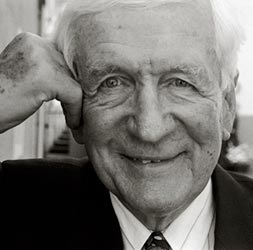 Norman Foster Ramsey is a product of America’s cultural melting pot. Born in 1915 in the nation’s capital, Washington, DC, his father was a Scottish émigré and West Point graduate, his mother was the daughter of German immigrants and a maths instructor at the University of Kansas. It was assumed that Norman would enter West Point. Instead he entered Columbia University to study engineering but switched to mathematics, and in his senior year was given a teaching assistantship normally reserved for graduate students. He graduated in 1935, keen to pursue a career in physics, and Columbia gave him a Kellett Fellowship to Cambridge University, England, where the Cavendish Laboratory housed many leaders in the field.

He returned to Columbia with a new degree and an interest in molecular beams to do research with Isidor Rabi (who invented the molecular beam magnetic resonance method and received the Nobel prize in 1944). Following the completion of his thesis, Ramsey went to Washington, DC as a Carnegie Institution Fellow. In 1940 he married Elinor Jameson and took a post at the University of Illinois but with war raging in Europe Ramsey was sent to the MIT to work on radar, then to Washington as a consultant to the Secretary of War. In 1943 Ramsey was sent to New Mexico to work on the Manhattan Project. After the war, Ramsey and Rabi revived their laboratory at Columbia and started the Brookhaven National Laboratory on Long Island, New York, where in 1946 Ramsey became the fi rst head of the Physics Department.

In 1947 he moved to Harvard where he taught for 40 years and set up a molecular beam laboratory. However, frustrated by the difficulty in obtaining uniform magnetic fi elds, in 1949 Ramsey invented the separated oscillatory field method which obtained the desired accuracy by sending the atoms through two separate oscillating electromagnetic fields. When synchronized with a microwave oscillator, the system could measure time with extreme accuracy, providing the basis for the atomic clock. It was primarily for this work that he received one of the Nobel Prizes in Physics in 1989. (The other prize was awarded to Wolfgang Paul and Hans Georg Dehmelt.) Ramsey went on with others to invent the atomic hydrogen maser, a microwave-emitting relative of the laser, which could measure hyperfi ne separations, and convert it to a clock of unprecedented stability.

Meanwhile, he was teaching at the Institut Laue-Langevin in France, and Harvard. He also worked for NATO and for 16 years was President of Universities Research Association. After Elinor died in 1983, Norman married Ellie Welch. They have a total of seven children. Ramsey officially retired from Harvard in 1986 and continued his work, both in the lab and on paper.