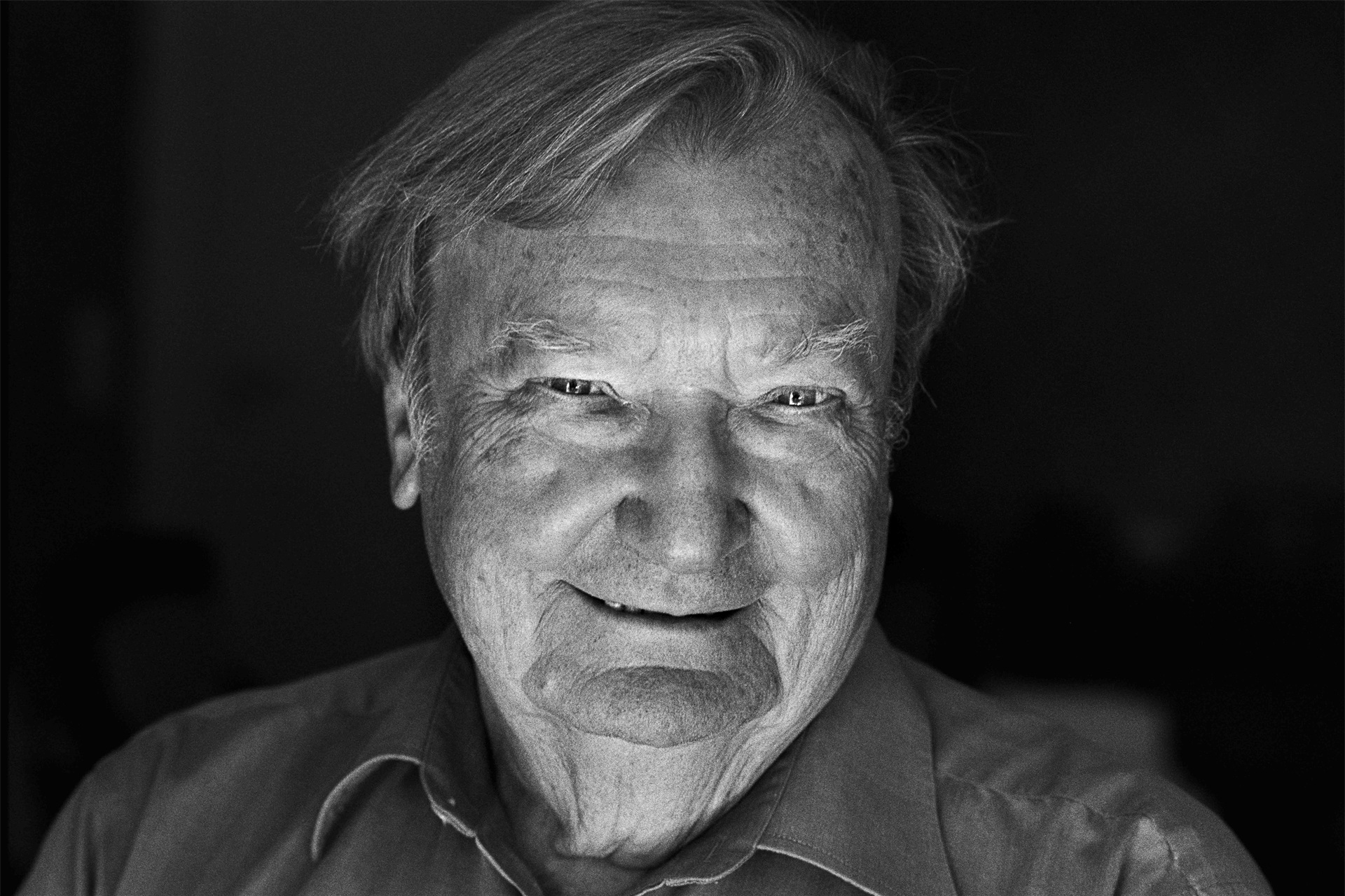 Carlo Rubbia was born in Gorizia, Italy, in 1934, but his family moved to Venice and then to Udine during the tragic events in his home region during World War II. After high school, he applied to study physics at the Scuola Normale in Pisa but failed the entry exam. He instead started studying engineering at the University of Milan, when a successful normal candidate dropped out and Rubbia was offered his place. He helped develop pulsed gas particle detectors and gained his degree with a thesis on cosmic ray experiments. In 1958, he joined Columbia University in the US as a researcher to gain experience of particle accelerators, and became interested in weak interactions. He returned to Rome in 1959 and rather soon afterwards joined the newly founded European Organization for Nuclear Research (CERN), where he made further progress on the structure of weak interactions, such as the discovery of the beta decay process of the positive pion, and the first observation of muon capture by free hydrogen.

In 1970, he was appointed Higgins Professor of Physics at Harvard University and, with David Cline and Alfred Mann, proposed a major neutrino experiment at the new Fermi National Accelerator Laboratory (Fermilab), which allowed them to observe all-muons events in neutrino interactions, hinting at the existence of the charm quark. Rubbia divided his time between teaching at Harvard, and research at CERN in Geneva, where a new particle beam accelerator used counterrotating beams of protons colliding against each other. In 1976, with Cline and Peter McIntyre, he suggested adapting this machine to collide protons and antiprotons in the search for intermediate vector bosons (roughly 100 times as heavy as the proton). The experiment began in 1981 and, in January 1983, the team succeeded in creating W particles, followed a couple of months later by the even more elusive Z particles. The following year, Rubbia and Simon van der Meer (part of the CERN team who developed the antiproton beam) shared the Nobel Prize in Physics.

Rubbia served as director-general of CERN from 1989–94, as president of ENEA (Italian National Agency for New technologies, Energy and the Environment) until July 2005, and as a professor at the University of Pavia, Italy. From 2010-2015 he was scientific director of the Institute for Advanced Sustainability Studies (IASS) in Potsdam and later on director of the Chinese University of Mining and Technology’s Institute of Sustainable Energy. He is presently professor at the Grans Sasso Science Institute (GSSI) in L’Aquila. He is a member of numerous scientific academies and holds 38 honorary degrees. Rubbia was made a Senator for Life of the Italian Republic in 2013.

This text and the picture of the Nobel Laureate were adapted from the book: "NOBELS. Nobel Laureates photographed by Peter Badge" (WILEY-VCH, 2008). 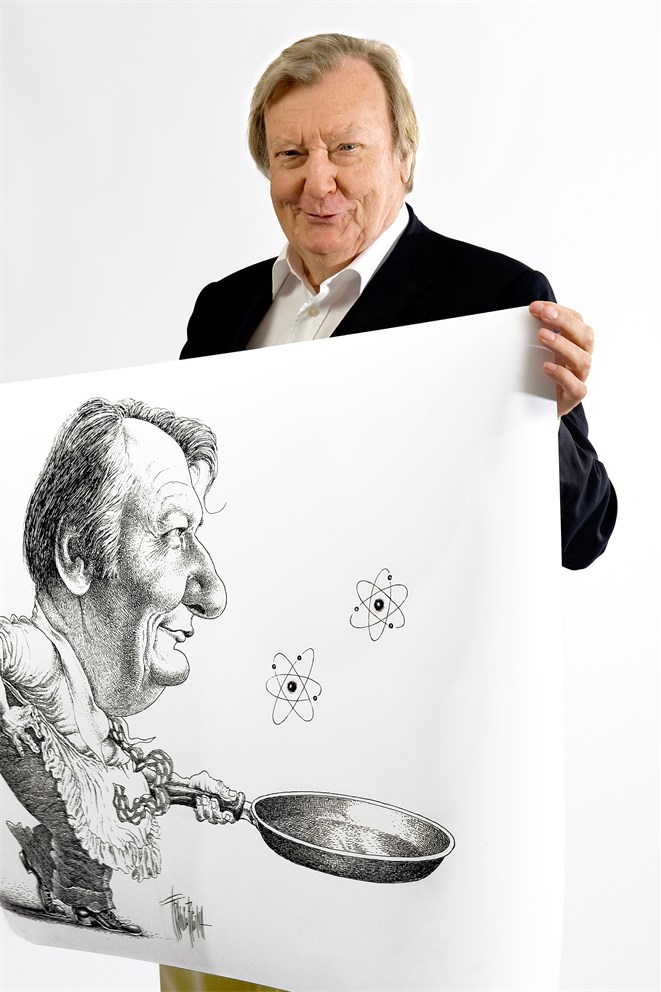 When Rubbia finally shows up to our third appointment, he is quite taken
aback when asked to make a drawing of “what you got the Prize for”. He seems
very interested, though, but after some contemplation decides not to draw:
“I will think of something!“ he says, and arranges a fourth meeting.
This time he comes with a very funny cartoon, carefully scaled to the size of
the other drawings. The caricature shows, well, Carlo Rubbia!

The Particle Masterchef
by Adam Smith

Carlo Rubbia might not be the only Nobel Laureate to be holding a picture of himself in the Sketches of Science exhibition (see Leon Lederman and Martinus Veltman), nor the only Laureate not to make a drawing (see Richard Taylor), but he is the only one to be holding a sketch made by someone else. This cartoon, of Rubbia dressed for the kitchen and frying-up particles, hangs on the wall of his office at the European Organization for Nuclear Research, known as CERN.

Rubbia was awarded the Nobel Prize in Physics for 1984, together with Simon van der Meer, for discovering two ‘missing’ subatomic particles just the year beforehand. The W and Z bosons, the particles they found, are the mediators of the so-called weak interaction, responsible for radioactive decay, among other things. The existence of these relatively heavy missing bosons had been postulated for many years, but no-one had been able to observe them experimentally. ‘Observing’ them means first creating them in a particle accelerator, by smashing other particles together. Rubbia realised that in order to achieve sufficiently energetic collisions to produce W and Z, he would need to reconfigure the accelerator at CERN in order to bring beams of protons and antiprotons crashing into each other. This reconfiguration of the accelerator into a collider, a major undertaking, was achieved in just three years.

However, even once operational the new collider only created W and Z extremely rarely, just once every billion collisions. Rubbia and his team therefore needed also to develop a particularly efficient detector, in order to identify the missing bosons above the enormous background of signals. This allowed them fairly rapidly to confirm the predictions of the electroweak theory postulated by Sheldon Glashow, Abdus Salam and Steven Weinberg, who had together received the 1979 Nobel Prize in Physics. In a 2008 interview for Nobelprize.org, Rubbia recalled how, “when we got the result, Steve Weinberg told me that he was very happy, because he was afraid he would otherwise have had to pay back the Prize!”

Although small by the standards of today’s experiments in particle physics, the search for W and Z required the largest team that had ever been assembled to undertake such a project: around 100 people. “It’s a collective enterprise, evidently” says Rubbia, “but a collective enterprise in which individuals maintain their individuality and originality.”